Here on the Peninsula (San Francisco Bay) we have a wonderful ….

Connecting San Francisco to San Jose is an inexpensive…

Erin and I take the train from Menlo Park up to Redwood City for her swimming lessons. Sometimes we walk, but it’s about 12 miles roundtrip, and my heels have been mildly bruised for a little while now so I’ve laid off the long walks for the forseeable future. The CalTrain station in Menlo Park is only about a mile away, so today I loaded Erin up in her backpack and headed off to swimming.

(A brief aside for those who have been playing our game: Swimming Mom was at swimming today after missing Tuesday. My conscience was really doing a number on me about not knowing her name and thereby publicly humiliating myself by revealing this fact, so as soon as I saw her I apologized, explained my behaviour as best I could, and asked for her name. She gave me a name, which I will assume is genuinely hers, and she invited Erin and me over for a playdate sometime next week. So as far as I know she doesn’t think too badly of me for my blunder.)

So, on the train, which costs about $8 roundtrip when we take it because even though we only go 1 stop we cross a zone line, I overheard the following conversation:

What the “guy” in question had failed to do was purchase a ticket. This happens sometimes (probably a lot on CalTrain), and it sometimes works. The CalTrain conductor-types don’t always come through the cars between your boarding station and your de-boarding station to check tickets. I think they’ve only done it once between my station and Redwood City.

But I always buy the stupid roundtrip ticket anyway. Because I’m paranoid about something just like the above situation happening to me. Just because you’re paranoid doesn’t mean they aren’t really out to get you.

And these conductor-types were going to let this guy, who had already earned a fine and a boot for the day, sit comfortably today so that he would try it again next week. Rather than enforce the CalTrain policy as it exists (boot the guy, fine him, etc…) they were going to also ENTRAP & SPITE him. Out of boredom, pique, and some petty vindictiveness.

They separated to check tickets in the cars adjacent to the boarding area where I was standing. And I now have a tip for the mystery guy who will be very very unhappy and very very late next Thursday.

Always carry one of these with you on the train: 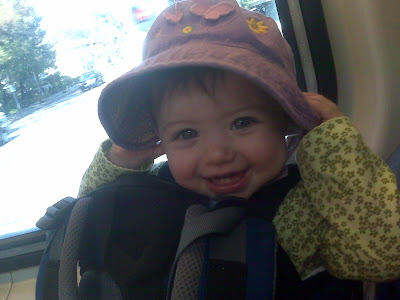 Both conductor-types were staring at this little girl of mine whenever they could. And sure enough when they started checking for tickets they just gave me a nod and walked on by.

After swimming Erin seemed almost ready for a nap. And I thought, “Today might be the day we go back to the movies, and she actually lets me watch one!” So I raced to get to the theater before the next showing of Leatherheads with Miss Pettigrew as a backup (because I’ve paid to get in twice now and still not seen more than 10 minutes of it). I asked the guy selling tickets if there was anyone in either of those theaters, and yes. Lots of them.

Sigh. Based on the last couple of attempts at movie watching with Erin she probably wasn’t going to be totally silent for the whole movie. And I didn’t want to have to walk out again. But I really just wanted to sit in the quiet for a couple of hours zoning out, and if I left to go home it would still take another hour to get home and get Erin in her crib for a very late nap.

And then I saw that Nim’s Island was showing in a few minutes. Kids’ movie. Probably dumb. But it would be something, and since it was a kids’ movie Erin probably wouldn’t even be the babbliest person there.

So I bought a ticket, got a drink from concessions (but no popcorn, because popcorn does not help with the abs) readied a bottle for Erin, and sat her down in the backpack on the chair next to me.

Erin’s Movie Review: “Nim’s Island had some great previews, guys. There were bouncing things, and I’m pretty sure I saw a duck. And then, I don’t know what happened between the previews and the credits, because I was pretty sleepy guys. I give it two “da’s”. But only because there was a seal that I saw a couple of times at the end. Bye-bye guys.”

Yeah. She slept through the entire frickin’ thing.

So, looking back on my day, and it’s Tale of Two Tickets, I realize in my perfect hindsight that I needn’t have purchased either ticket. I could have free-ridden the train, and I could have seen whatever the hell I wanted to, because this girl of mine 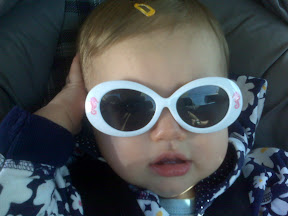 is my very own E-ticket.*

*Here’s a fun game: figure out the 3 different ways in which I could mean “E-ticket” here.