She also figured out how to indent and change the font colour, apparently.

All I’ve learned today is that I am on a strange mailing list. Because Victoria’s Secret sent me an offer for a free cotton panty* plus $10 off any bra!.

I think my abs would look awesome framed by a new bra and panty.

For those who missed it, I now have Ryan Reynolds abs. I’ve been to the gym two days in a row, and now I could easily be a body double for him if he does a prequel to “Just Friends“.

Erin has also surprised me a couple of times in the last day or so. Out of the blue I asked her where her bear was, and she picked him up right away. I don’t remember drilling the “bear” concept into her like I’ve done with “yellow” and “banana” and “piggy” and “daddy”, but she picked it up anyway. Same with “hair”. I only remember showing her what hair was once, and that was about a week ago. But sure enough when I asked her where her hair was she grabbed a handful of it to show me.

I love this kid. 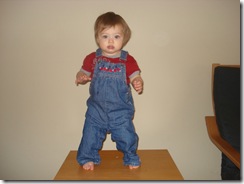 And yes, that is a picture of her standing on a small table. She figured out how to remain standing a few days ago and in a brilliant moment of under-protective fathering I stood her up on the table and snapped a picture from a few feet away, hoping that she wouldn’t suddenly forget how to stand and end up doing a nosedive over the edge.

I also threw her into the pool yesterday.

Am I good at this job or what?

* I actually had to go back and reread this part because I was sure the card said “pair of panties”, but it says “free panty”. I thought they always came in pairs. Maybe because I’m a guy they’re only going to give me half of a pair of panties.