My great fear as a parent is that I will fail.

No, that’s too trite. My great fear is that despite an intellectual commitment to raising my children in as thoughtful, respectful, joyous and diligent a manner as possible, I will instead harm them with those thoughts and beliefs that remain hidden from the world, and even from myself; the submerged opinions formed in my own childhood that have long since been consciously rejected, but which perhaps persist, infecting my healthy parenting with a malady of anachronism.

My wife and I call her “Sophie the twenty dollar giraffe“, because even though she is a fairly inexpensive rubber toy in her native France, once imported her price skyrockets.

One cannot be a good (read: slightly snobby and keeping up with the Joneses) parent on the San Francisco Peninsula unless one has purchased Sophie. She is an excellent teething toy, and babies love her.

Erin loved chewing on Sophie so much that when she lost her at dinner we immediately purchased another. That’s Sophie, the forty dollar giraffe.

We spent the money in part because it helped when Erin was teething, but we also spent the money because Erin liked Sophie. I want to give Erin the things that she likes.

But sometimes giving her the things she likes makes me feel guilty. For instance, she loves to push her own stroller around. And this is wonderful, and adorable, and also not always a possibility. But in those instances when I’ve taken her stroller from her, for whatever reason, she has grown very upset with me, and she shows me this face: 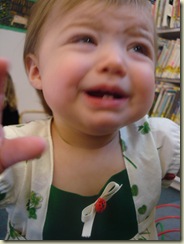 Which breaks my heart. And so occasionally I’ll give in, and let her push it anyway.

This always makes me feel guilty. As though I am spoiling her by letting her have the things that she wants so desperately.

And then I wonder about this feeling of guilt, and whether it’s legitimate or not. And I trace it, correctly or not, to a chapter of Rousseau’s Emile that I remember reading in the 9th grade. It’s an Enlightenment treatise on education that devotes only one chapter to educating girls (an oversight Mary Wollestonecraft was very quick to criticize). In this chapter Rousseau introduces Sophie, and discusses the proper way to educate a girl who is destined to be Emile’s companion, wife, and servant.

And one of the key elements to raising this girl, doomed by her sex to the life Rousseau imagines for her, is to create her as a passive companion: “It is necessary that the one [Emile] have the power and the will; it is enough that the other [Sophie] should offer little resistance.”

My deep fear is that my guilty feelings about possibly spoiling my daughter are influenced by some archaic notion that what Rousseau is saying is true: that women need to be raised differently than men, because they have some nature that differentiates them in a relevant way.

This passage from Rousseau has stuck with me for 16 years, peering down from my shoulder like my own devil; stalking me like a mad killer of dreams:

“Girls should be vigilant and hardworking, but this is not enough by itself; they should be accustomed to annoyances early on. This misfortune, if such it be, is inherent in their sex, and they will never escape from it, unless to endure much more cruel sufferings. For their entire life they will have to submit to the most continual and most severe annoyances, those of proper decorum. They must be trained to bear constraint from the first, so that it costs them nothing, to master their own fantasies in order to submit to the will of others.”

And every time I think about taking Erin’s stroller away I wonder if I am just buying into Rousseau’s line: that I need to raise my daughter to be accustomed to disappointment; that I need to make her docile in the face of my authority, even when I exercise that authority whimsically and arbitrarily.

And yet, even knowing that this might be the reason for my guilt, I cannot help but think I might spoil her. And that is the real, damning, myopic legacy that I cannot shake.

I fear that if, in the end, I have a son that I am going to make a choice, a horrible, terrible, and frightful choice. One that will save one child and doom another, because I am entirely within the power of some other entity.

While William Styron’s Sophie has to face this choice because of a sadistic Nazi doctor, my fear is that I will be forced to make my own choice because of some lingering, traitorous, and anachronistic ideas about differences between men and women.

What I hope is that as much guilt as I feel about indulging her I will likewise feel about indulging him, giving the lie to this entire fear I’ve now spent ages and pages articulating. But until I have a son this can never be put to the test. And if I never have a son I don’t think I will know for sure that I am anything better than the misguided, bigoted figure that I fear I will turn out to be.