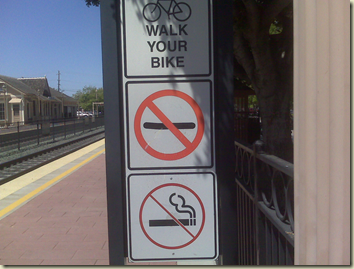 This is a sign at the Menlo Park Caltrain station. Erin and I saw this sign yesterday because we were taking the train to Redwood City (as we’ll do again today).

On the train, in our customary boarding area spot (we only go one stop, and it’s not worth it to take the backpack off and sit down for 1 minute then put the backpack on again) we were suddenly approached by a Conductor-Type.

"Would you like me to clear a seat for you and your baby?"

He was asking me if I would like him to kick someone out of one of the "assistance" seating areas that seat four comfortably, facing each other, so that I wouldn’t have to (a) sit in a narrow two-seat, or (b) stand in the boarding area looking forlorn like no one cares about the tough lot in life that is the SAHD’s.

"Oh, thank you very much. We’re just going one stop, though. That was very kind."

Yeah she is. And she’s also magic, apparently.

When we deboarded (is it "deboarded" or "disembarked" when you’re talking about trains?) the train in Redwood City we were met by a throng of happy little 4 year olds and their surprisingly competent and happy chaperones, all boarding the train we were just de-planing (I’ve given up).

And on our way back home later that afternoon we boarded the southbound train that those same 4 year olds were just abandoning, so we saw their cherubic, enthusiastic faces again, and we saw their happy chaperones. And we saw one unhappy little girl and a matronly chaperone trying to console her.

When Erin and I got on the train our Conductor-Type friend was there and he gave us a nod, and saw us watching the little girl and her chaperone. He confided: "I don’t know what his problem was. All she wanted to do  was announce "Redwood City" over the intercom as we pulled in. I was going to let her."

I looked around for the mysterious "he" the Conductor-Type was talking about.

I still didn’t know who he was talking about.

"He and I haven’t been getting along very well today. He’s been on since 5:30 this morning and we’ve had a long day of it."

Ah. Another Conductor-Type. One who doesn’t want kids playing with his train, no matter what his co-workers say.

Because that’s always my answer when presented with afternoon grumpiness.

Two Conductor-Types both alike in dignity,

on middling-to-fair Caltrain where we lay our scene,

From forth the fatal opinions of these two foes

And my Conductor-Type friend never once asked to see the ticket I had in my pocket. Any day now I’m going to stop buying them.