Erin’s second birthday will be both more and less outlandish than her first. Her first, the actual day, was spent at Disneyland. The day before she had a small “here, smash a cupcake” party with her baby bff and a small group of baby friends who have been a circle of friends forever. (Not their choice, of course. But until she moves out I’m going to be choosing her friends based on how cool the parents are. Dad has a golf cart to run errands? Sorry, you can’t be friends with Jane. Mom has an Iroc-Z that she stole from an ex-boyfriend in high school when he dumped her at a Weezer concert? Yes, yes you can play with Dark Galadriel.)

Her actual party was a family event held down in SoCal, apart from her baby friends, and mostly attended by people she had to crane her neck to see properly. There were jellyfish decorations everywhere, and a jellyfish cake, and I made some jellyfish trivia game and…I don’t even remember what else. I think there were jellyfish toys to go home with for the kids who were there. 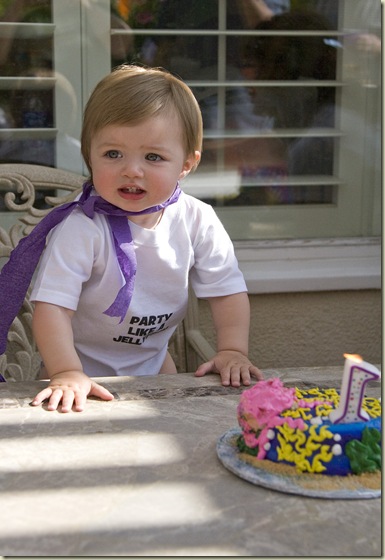 It was elaborate. But the effort and guest list made sense. Just family and old family friends.

This year we are staying home and we are having a park party. We have booked some picnic tables and we are co-hosting the party with the family of Erin’s closest baby friend, a little girl who is one day older than Erin. And now the logistics get crazy.

Not only because of the “how many from your side?” kind of arrangements (which I don’t really care about), but also the “Who, in our wide realm of toddler acquaintances do we invite?” kind of questions.

Of course all of the baby friends who were at her first not-party. And some family who can make the trip up north. And who else?

There are people with kids who we’ve spent a lot of time with, and whose parties we’ve attended. Last year we didn’t have to wonder if we should invite them, because we were out of town. Now, do we keep it low-key? Do we make it a broader toddler-community event? Our two families overlap with a lot of acquaintances and maybe-friends (like, we’d be friends if the opportunity allowed, but opportunity never does…), so does sharing a maybe-friend between two families elevate that person to friend-friend status and demand an invitation? Further, most of the people who are definitely getting invitations also know a lot of the same people, and might even be closer to them than we are, and now it’s all political.

That will probably sort itself out. I’m leaning toward sending out invitations to everyone whose e-mail address I can track down and who we have spent significant time with, even if it’s been a long, long time since we’ve seen them. I can’t think of anyone I wouldn’t want to have at the party. Is that too liberal?

(Oh, crap. What do we do about gifts? Will this just seem like I’m trying to get more crap for Erin? Trying to get invites to more parties so that we can remain in the “scene”? Hell, this really is political.)

But you know what? Erin hasn’t spent a ton of time with a lot of those kids in a long while. She has spent a ton of time with her friends at “school”. Two months ago I’d have just said “hell no” to school invites, because I don’t really know many of the parents at all well, and it’s not as though Erin would be wondering where her classmates were. But we do kind of know a couple of the parents. Do we just invite them? I might think “Of course” and that there would be no further discussion about it. But some of the parents passed out “hand made” valentines last month.

Hand made. They cut out little hearts and cards and dragged their child’s hand through paint and glitter and whatever else and dropped the cards in the cubbies at school. Come on. That’s not about the kids at all.

But if it isn’t about the kids, then it’s about the parents, wanting to build a group or live vicariously or keep up with the Joneses or whatever but the end result of all of the wondering about “Why valentines?” is that not inviting everyone in the class, especially someone who dished out a valentine, is controversy if we invite anyone at all. It’s “not participating in the community”, or the game, or the fantasy or whatever and that means opinions and talk and gossiping and…then Erin doesn’t get into Stanford after high school because one of these parents will turn out to be the Dean of Admissions in a dozen years. Or Erin won’t get a job at Google because one of the parents will have become CEO between now and then. Or she won’t get accepted into nun school because the head nun is the aunt of one of the snubbed kids. Or she won’t be the lead guitarist of Copperhead Death Kabob because the bassist didn’t get to eat cupcakes at the park with her when he was two, and his mom is fronting all of the band’s touring expenses.

I may be letting my imagination get the better of me here.

Further complicating the matter is that the co-host parents, Erin’s little bff’s parents, are thinking about inviting kids from their daycare, because, quite reasonably, those are the kids their daughter knows best. And they know the parents to some extent, or are at least part of a community with those parents (it’s a sort of work-specific daycare) that would be benefited or harmed to an even greater extent depending on whether the kids were invited or not.

Who doesn’t get invited? How did you decide?

Because, frankly, I don’t want to make a hundred cupcakes. With butterflies on them. (It’s a whole butterfly thing this time around. I promise: lasers and dinosaurs next year.)

I need some help.