I drift into semi-senile codgery more often as I watch my daughter sponge the world’s cultural scum, or as I see it creeping toward us in the temporal distance: Pink! Hannah! Montana! Everything!

“Back in my day, we had decent cartoons on Saturday mornings like Superfriends and Jayce and the Wheeled Warriors and G.I. Joe and we learned about storytelling and heroism and how to only fight half the battle and get out of the pool when a thunderstorm came up. Now, kids these days. They don’t even have the buddy cop show Simon and Simon to sneak up past their bedtime to watch. Or Moonlighting. Instead they have a wash of pink vapidness. Who will save them from stranger danger? Or teach them to eat their veggies? Or tell them about the magic of the conjunction (junction, what’s your function?)”

Back in my day we also had the best in non-commercialized educational programming, pre-Elmo Sesame Street.

Growing up along the Canada-U.S. border I would receive both PBS and CBC broadcasts of Sesame Street, and I watched a lot of it. (It wasn’t until I was in high school that I realized the Americans didn’t get all of the segments in French, or that Canadians didn’t get the segments in Spanish. This ignorance on my part was akin to another border-ignorance I had: until I was 18, yes 18, I thought you could walk into any place in the U.S. and give them Canadian money and they would take it at the daily exchange rate. I walked into a Safeway in San Jose and tried to buy a Pepsi with some Canadian change and the cashier looked at me like I was insane. He looked at me like I was dangerously insane when I met his incredulity with “What do you mean you don’t take it? It’s Canadian.”)

Ten years ago Erin would have been doomed to some marketed, packaged hell that had neither 80’s cartoons nor classic pre-Elmo Sesame Street. But now we have the internet, and the internet provides. 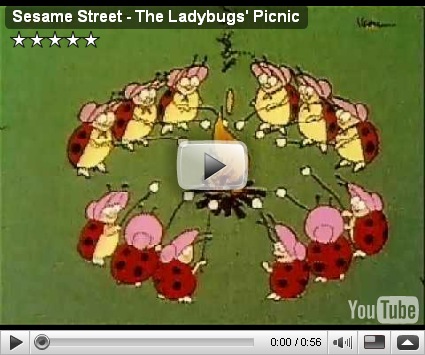 This was my favourite Sesame Street clip growing up, and it’s Erin’s favourite too. Across the span of decades my daughter and I are joined in our learning to count to 12. Tiny Shawn looks into the future and knows he must learn the lyrics to this song because his daughter will one day demand not only that he play the clip at every opportunity, but that he sing the song to her. And when he gets to the part where they stand around and tell knock-knock jokes she grins and knocks on her own head.