If you are following any of my social media accounts (which, of course you are, since you are reading this; I doubt you came here because you did a Google search for “Best Poutine in Canada” or something like that, because who would do that?), then you know that while we were visiting family in Canada, I did my best to try a different poutine every day.

Poutine, for those who don’t know already (which, of course you do, since you are reading this; I doubt you came here because you did a Google search for “What is a poutine?” or something like that, because who would do that?), is a dish from Quebec that consists of some combination of potatoes, cheese, and gravy. There are countless variations on this theme. But in my mind, the standard poutine is fries, cheese curds, and beef gravy.

On my poutine vacation I stuck with traditional poutine as often as possible: potatoes, cheese, gravy. No add-ons. (Although Montreal smoked meat is an entry-level variation, I didn’t even go that far afield).

A note about poutine: it is not photogenic. A few years ago, Gordon Ramsay tried to take over an historic Montreal barbecue restaurant and class it up and he failed miserably. I like to think it’s because there’s no way to make this food look good on a plate and eventually he swore himself back to LA.

A note about this post: The text is almost entirely taken from what I wrote under the Instagram photos I put up. If you saw those already, you already know what I’m going to say. 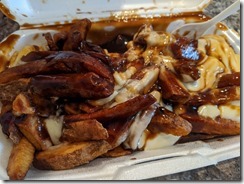 First poutine of the trip, from The Loose Caboose in Cornwall.

The first of many. #poutinevacation

I didn’t mention it at the time, but this one was sold out of a year-round chip wagon (they are usually summer-only venues) and it was a traditional curds and beef gravy poutine. It was a pretty good way to start the trip, and was overall in my Top 3. 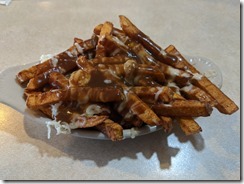 Poutine #2 on my #poutinevacation is from Bear’s Den in Akwesasne New York. Although using shredded mozzarella instead of cheese curds isn’t traditional, it’s a common variation and a way for restaurants to add poutine to the menu without shopping for a specialty ingredient. 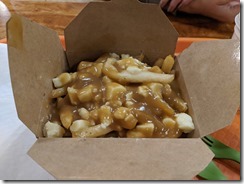 Doubling up today on my #poutinevacation (I didn’t have one the day/night we arrived). This one is from Upper Canada Village, and uses cheese curds, but turkey gravy.

I’m pretty sure they just used the gravy they had on hand for the Christmas menu they were serving. If you have gravy anyway, why not put it on a poutine? Very Canadian. 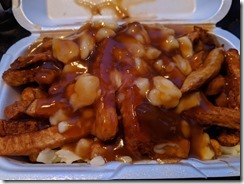 I think Billy K’s is also in my Top 3 of the trip. That’s two in Cornwall. 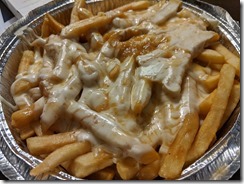 I had to skip poutine yesterday because my sister cooked enough food to feed the whole city and I had to do my part. But today’s #poutinevacation stop is Cornwall BBQ, the kind of restaurant with pictures showing the owner with various hockey players and also Lou Diamond Phillips. I met Owen Nolan here when I was a kid after he played the OHL-QMJHL All Star Game. It has the chicken gravy you see at a lot of barbecue chicken restaurants in this region. 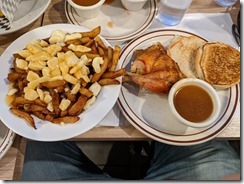 Today’s #poutinevacation stop is the Côte St-Luc BBQ in Montreal. Along with St Hubert’s (a chain since I can remember) and Chalet BBQ (not to be confused with Toronto-based Swiss Chalet) Côte St-Luc BBQ is one of the original rotisserie chicken restaurants in town, still serving the same quarter chicken with fries, buns, and gravy it did when I was coming here as a kid, and probably as it did in the 50s when it opened.
The poutine uses enormous curds, and the same herbed chicken gravy they serve as a dipping sauce with the chicken. The flavour of the gravy falls into the background when it’s served on fries with salty curds like this though. It’s better as a dip. 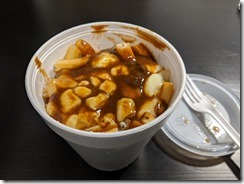 We’ve moved west of the Quebec border region, down the St. Lawrence River, to Kingston on Lake Ontario as I continue my #poutinevacation. We’re staying downtown, and it’s Saturday night, so the bars are crowded and Bubba’s Pizza is open to serve the discerning poutine aficionado even at midnight. Dark brown beef gravy, giant cheese curds, poured over packed down fries in a big styrofoam to go cup: this is a poutine built for winter. Emily and I usually go here at least once when we visit Kingston, mostly because we usually stay downtown. But it’s also very, very, poutine-y.

This is Emily’s favourite poutine, and the one she thinks of as archetypal. I think it rounds out my Top 3 of the trip. 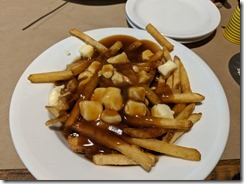 Tonight’s #poutinevacation stop is Jack Astor’s in downtown Kingston. Emily described it as a TGI Friday’s with Axe body spray (2 out of 3 songs playing just now were Nickelback), but it’s late, the sky is dropping freezing rain on us, and this place is across the street from where we’re staying.
The poutine is…fine. Curds and beef gravy are what I prefer, but the fries were too thin, the gravy was weak (so as to be inoffensive to most palates), and there was too much of the boring gravy (my sister complains of soupy poutines, and this is what she means). 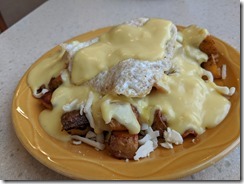 My high school friend Mohamed owns the Jiffy Grill restaurants in Kingston. He’s been seeing my #poutinevacation posts and invited me to come try his breakfast poutine. I haven’t been ordering any specialty poutines on this trip, but I made an exception for Mo. Eggs, bacon, onions, home fries, mozzarella, and hollandaise. Now I know I can start every day with a poutine! Thanks Mo!

This was the only non-traditional poutine on the trip. I may have to make it at home. 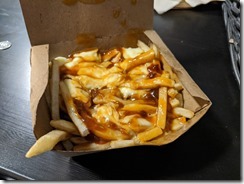 I just want you to know that Canada serves poutine at McDonald’s. I don’t expect you to enjoy that information. #poutinevacation 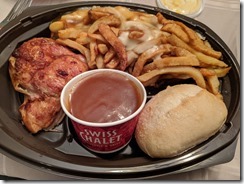 Today’s #poutinevacation stop is Swiss Chalet, a Toronto-based rotisserie chicken chain not to be confused with Chalet BBQ in Montreal, though its food is in that Montreal BBQ chicken style, like St. Hubert’s and Côte St-Luc BBQ.
Swiss Chalet has a Chalet sauce for dipping, and it’s herbed and peppered, but the poutine gravy is just a basic brown gravy, and they seem to use shredded mozzarella instead of cheese curds.
St. Hubert’s is probably the better of the two chains. Suck it, Toronto! Just kidding, I love you Toronto. But this poutine is boring. 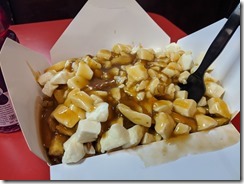 I know, I know! I didn’t have a #poutinevacation stop yesterday. Emily talked me out of ordering one at St. Hubert’s and trying to eat it while driving down the 401 at night in the snow. Blame her. I did have two the other day, though, so I’m not behind.
Today’s stop is a poutine chain (there’s at least one) called Smoke’s. Three things Smoke’s has going for it: Vegetarian poutine options, if you are inclined; U.S. locations (I went to the one in Berkeley before I’d ever seen one in Canada); and very squeaky cheese curds.
The poutine itself is otherwise unremarkable. The gravy is boring and isn’t really hot enough to melt the cheese curds. The price is pretty high compared to other places.
It’s lunchtime and I’m the only one here. That should be informative. 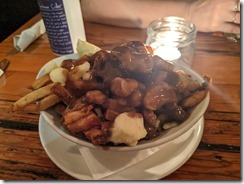 Today’s late-night #poutinevacation stop is the Red House in downtown Kingston. My friend Thom, who lives here and has been following my poutine stops to some degree sent me an article on the best poutine spots in town. Bubba’s was on the list, of course, as were a number of places notable for adding gourmet ingredients.
I am not here for that.
The Red House just uses a brown beef gravy and cheese curds. Unlike most other places that use curds, they use fresh curds (I think made in-house), so instead of chewy, squeaky curds (when cold), that are soft and pillowy.
The gravy wasn’t particularly hot, so there were a lot of cold curds on top, but they did mix some curds in with the fries to add some melted goodness underneath. A lot of places will just put the curds on top and the whole thing sinks or swims depending on the temperature of the gravy and the time delay before eating. The gravy also leaned ever so slightly to the sour, vinegary side. I think if the curds or fries had been saltier this would have been a good balance.
I think if I were really into artisanal cheese curds, I would appreciate this one more. But I’m just not an artisanal cheese curd kind of guy. 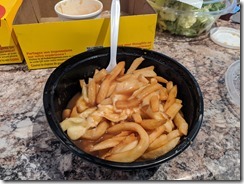 My #poutinevacation is over now. My sister ordered me a poutine from St. Hubert’s that I could have for lunch when I stopped at her place on the way from Kingston to Montreal to fly out. St. Hubert’s uses their peppered chicken gravy, unlike Swiss Chalet who uses some random brown gravy instead of their in house Chalet sauce. I still think that’s a mistake.
This is a poutine from my childhood, from the same restaurant we drove by every time we crossed the Seaway International Bridge to or from the rez. It’s not great (though I’ve had my standards raised pretty high on this trip). But! If you are in Berkeley (yes, Berkeley again), there is a Montreal food place called Augie’s Montreal Smoked Meat that makes a curd-based poutine with imported St. Hubert’s gravy. You’re welcome, NorCal.
I have to catch a flight now, with no time for dinner poutine at the airport. You’re welcome for all the poutine pictures. Emily thinks I missed an opportunity to become a #poutinfluencer with my #poutinstagram.
Next time, maybe.

And that’s all! Thirteen poutines, two out of three great ones from Cornwall, but probably the best one from Kingston. All of my favourites used beef gravy and cheese curds.

Do you have any plans to take a poutine vacation? Please let me know where you go.

2 thoughts on “I Went On a Poutine Vacation, Now I Am Made of Cheese and Gravy”