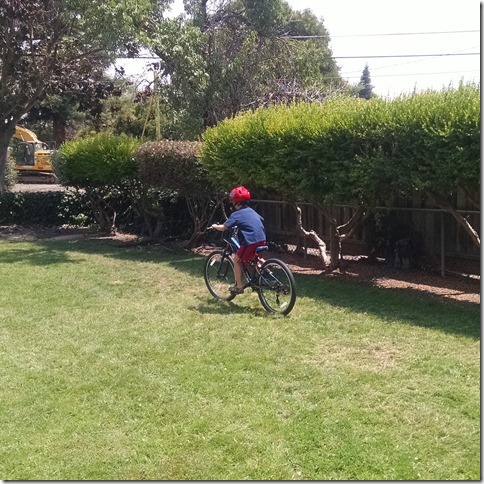 Adrian sat in the grass at the park, bawling and clutching his ankle. It was the fourth time he had fallen from his bike in fifteen minutes, and this time he had struck one of the pedals with his ankle on the way down. I could see there was no scrape or major injury, just a lot of frustration. He had not been successful at getting the bike moving. He would pedal once, then fall. Pedal once, then fall.

He was exhausted, hot, defeated, and angry. I had let him pick out a new bike for his birthday a few months earlier, but at the time he had been a hair too short for it. Noticing how much he’d grown since the end of the school year, and being home from trips and camps for once, today, I decided, would be Big Bike Riding day at Camp Dad. I regretted my decision quite a bit as I looked at his reddening face.

The new bike, with its gears and hand brakes, was a significant leap not only in size, but in technology, and I wanted to give him some safe practice with it before the new school year began and we started riding bikes on neighborhood streets. I have either a healthy respect for or an unhealthy paranoia about my kids on bikes. I was hit by a van while riding on a country highway when I was six, and the memory of that, how quick and severe an event it had been, has always made me less than enthusiastic about my kids riding around these much busier streets. I admit I am the roadblock in their cycling careers, so every once in a while I will steel myself and try to teach them something.

Seeing Adrian on the ground, ready to give up, I wanted to let him. I hate the thought of him riding a bike. He’s still too short for this bike, maybe. He won’t be safe on it for months. Maybe a year. Maybe we’ll try again in the spring. But at odds with my desire to put the bike back in the garage is either a deep well of parental patience, or an inexhaustible mine of bullshit-proof ore: I don’t let my kids talk themselves out of trying, or talk me into letting them quit. I sit through tears and pleading, but if I am certain they can do something, I insist that they try. “Endeavor to persevere,” I think to myself, and then I laugh.

Someday they might declare war on the Union, but today they are going to ride bikes.

Two women had entered the park just before Adrian fell the last time. They sat at the picnic table, and the scene they witnessed must have seemed bizarre: a child, evidently hurt and crying; his father standing some distance away, not moving toward him, not comforting, just watching; eventually the child stops crying and the father, still not comforting or sympathizing, insists, “Up on the bike again.” What kind of monster just stands there?

This is a common tactic I use with my kids: I wait out the frustration rather than trying to deflect attention or sweeten the deal. They’re allowed to be frustrated, and I encourage them to express their reasons for the feeling. If the frustration inspires arguments against an activity, I address those. “I’m too little. The bike is too big!” Maybe. “No, I’ve seen you pedal. You can do it. You just need some help to start.” But I don’t let the frustration itself move me to make promises or concessions.

Adrian picked up his bike, arranged the pedals to his satisfaction, then swung a leg over again, hoping this would be the last time his implacable father would insist on this torturous activity.

I held his seat while he starting pedaling. Of course I did.

He built up speed and I steadied him. He looked over at me, jogging next to him, and he started smiling. He pedaled faster.

He didn’t notice when I let go.

He flew for a time, then slowed in the grass, then toppled over, left foot reaching down to catch the ground and save himself from tumbling. He had learned from his earlier falls. That was the point.

This time, instead of being frustrated the he had fallen, he was excited that he had ridden. He bounded over to where I was standing, the same place I’d been standing when I insisted he get up and try again.

“Will you help me get started again, daddy?” he asked. And I did.

Of course I did. I’m not actually a monster.

“I didn’t surrender, but they took my horse and made him surrender. They have him pulling a wagon up in Kansas I bet.”

1 thought on “Endeavor To Persevere”