When we woke up this morning, Emily and I had been married for 21 years. Tomorrow, we’ll go out to a nice dinner, but today is a regular day in a wonderfully long marriage. I woke up the kids and got them to school, then went grocery shopping. Emily went to work. I cleaned the gutters in the rain because I noticed one was clogged. I went to the hardware store for a drain snake to take care of another clogged drain pipe. Later, I’ll take Adrian to piano and pick up Erin from basketball practice. Emily will go to San Francisco to teach a class. I’ll make dinner, and get the kids through homework. Emily will come home later, and we’ll watch Doctor Who.

That’s a pretty good day, as I look at it. We’re healthy, secure, happy, and we have time for each other and for the kids. On most days, Emily is home by dinner (she only teaches on Thursdays); on most days, I have rehearsal for the musical I wrote, then I make a quick dinner, or maybe Emily will pick up something on the way home. Some days are filled with meetings at the school. Not every day is an adventure you photograph. Not every weekend is a food tour of Chinatown or a trip to Canada. Not every anniversary is a weekend away at a resort.

But some anniversaries are. As the rain filled the gutters, I thought about our twentieth anniversary last year.

We wanted to do something very special for our twentieth anniversary. We considered lots of things: the Orient Express; Argentina; Hawaii; Bali; Banff; Barcelona. Having a January anniversary in California means chasing the sun somewhere, or leaning into winter somewhere else. We couldn’t make up our minds. Then Lin-Manuel Miranda announced he would bring Hamilton to Puerto Rico, and he would step back into the lead role for that run. It would all support relief efforts in Puerto Rico through the Flamboyan Arts Fund. The choice was suddenly very easy.

So last year we left the kids with grandma (thanks grandma!) and spent an extra-long weekend in Puerto Rico. 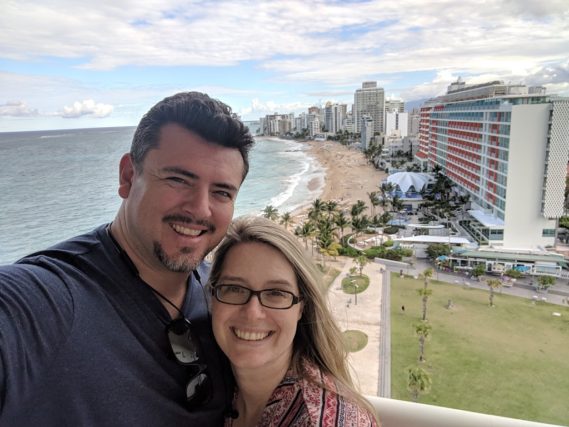 We had a lovely anniversary dinner at 1919. 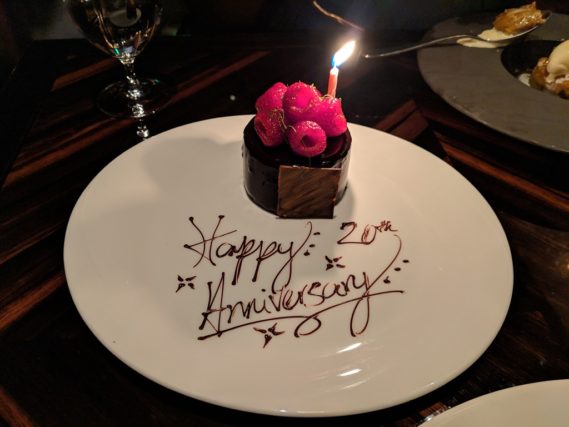 And by coincidence, Luis Miranda Jr. (Lin-Manuel’s father) was also there having dinner with the Flamboyan Arts Fund group that night. 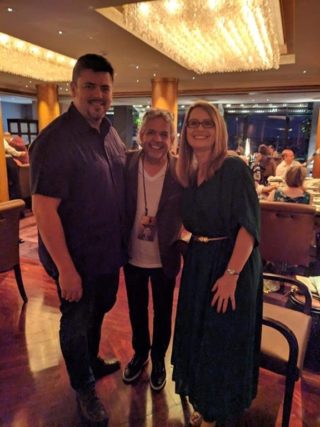 The next day we saw Hamilton, and it was amazing. It couldn’t have been otherwise. 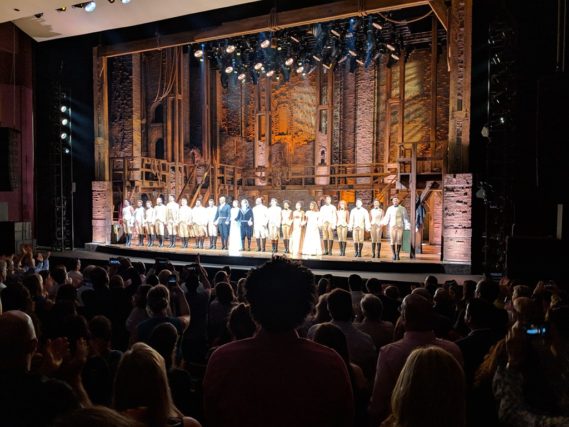 And by coincidence, Puerto Rico was celebrating the San Sebastian (“San Se”) street festival that weekend, so Old San Juan was the site of the biggest party I’ve ever seen. We walked all over Old San Juan with hundreds of thousands of other people, eating and drinking and dancing and listening to live music. 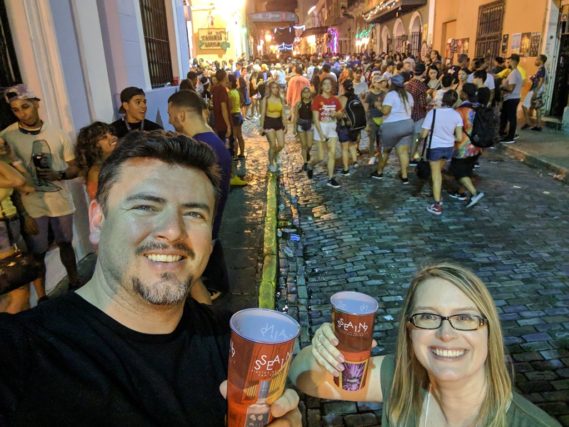 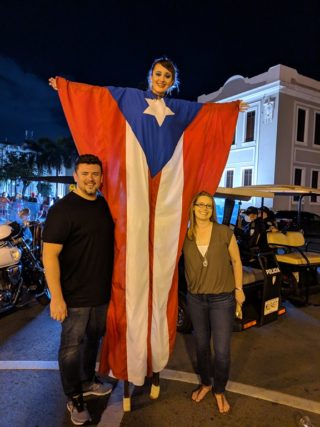 The next day we got a little dressed up and did a photoshoot in town. We used a service called Flytographer to connect us to a local photographer who knew her way around and where to shoot. 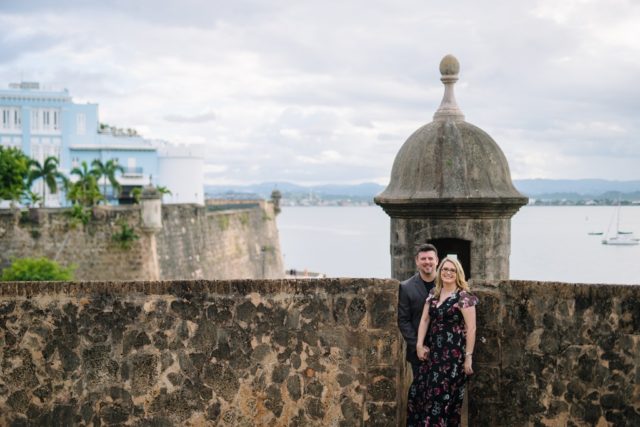 That night we went to a place called Lote 23, where Puerto Rican chefs and restaurant owners have permanent food trucks. There were lots of people inside, and music playing, but the front gate at the sidewalk entrance seemed to be locked. Our cab driver knew where the back entrance was, so he drove us around to the parking lot side. We got out and approached a check-in booth where some marketing company seemed to be collecting e-mail addresses and getting people to download their networking app. It wasn’t until we were all signed in and starting to walk through the entrance that we realized:

We had just crashed a private networking event connecting local startups and investors. 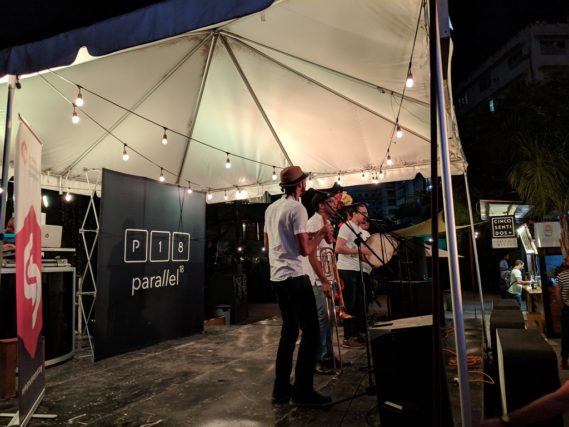 They didn’t care, but we didn’t overstay our (un)welcome. We bailed after a few minutes, vowing to return on a night it was actually open, and headed out to another part of town claiming to have restaurants or bars that were open.

We ended up at a restaurant in La Placita for dinner. It was the only place open, and it was fine. Emily met a cat. 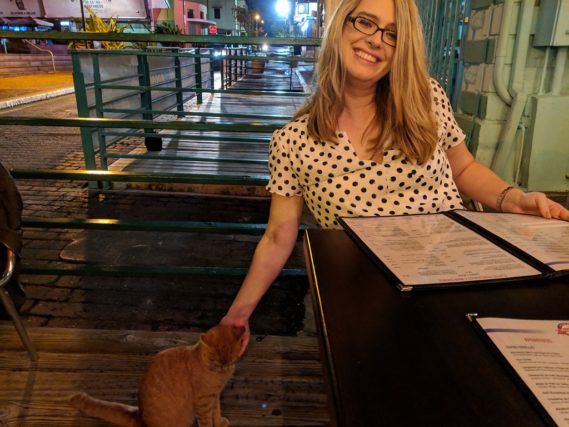 But just across the street, at a walk-up bar called El Coco de Luis, we had the best, and cheapest, mojitos we had in San Juan. 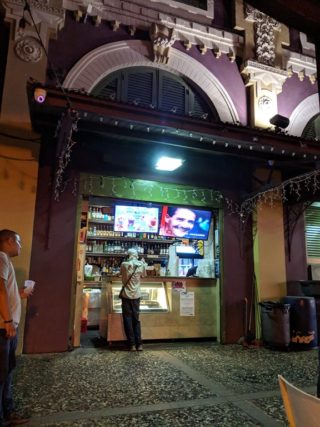 We sat outside and drank out of plastic cups and be’d married. 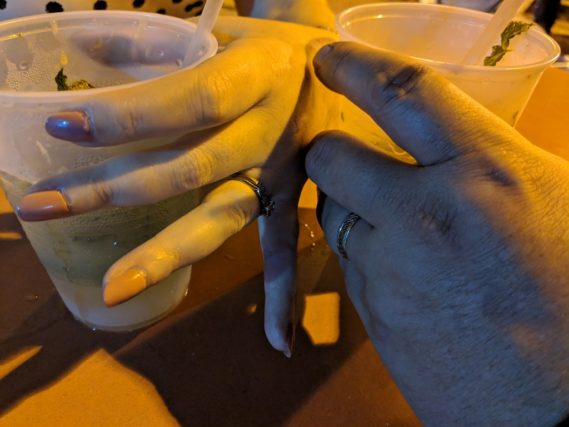 The next day we did an actual tour of Old San Juan with a tour guide our hotel connected us with. 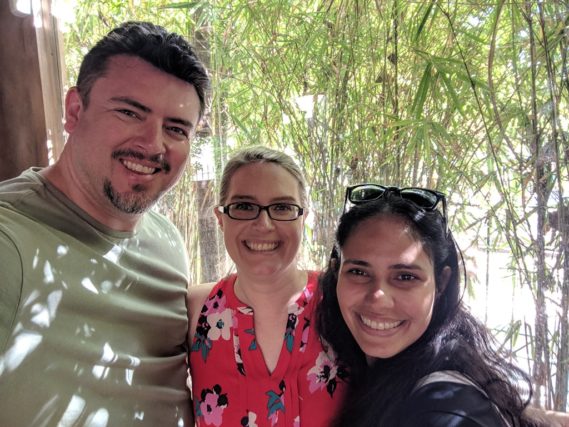 We had already spent a lot of time in that part of the city, but still didn’t know anything about it. 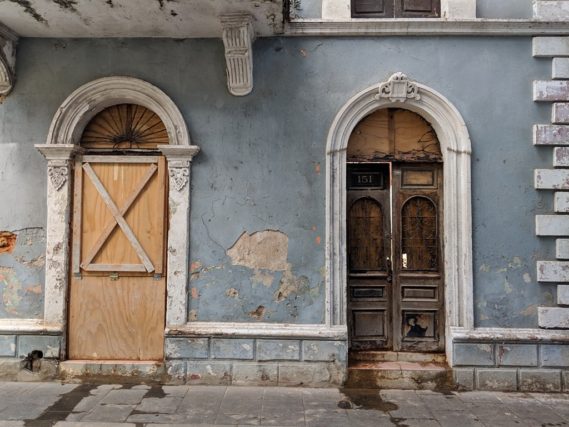 Our guide told us all about the old colony, the buildings, forts, and churches, but we also talked about current events in Puerto Rico, reactions to aid and banks and Hamilton, and different power structures on the island. She knew everybody, and took us to an art exhibit where we were able to see work by local artists, and to a bar where we did a rum tasting behind the bar with the bartender. 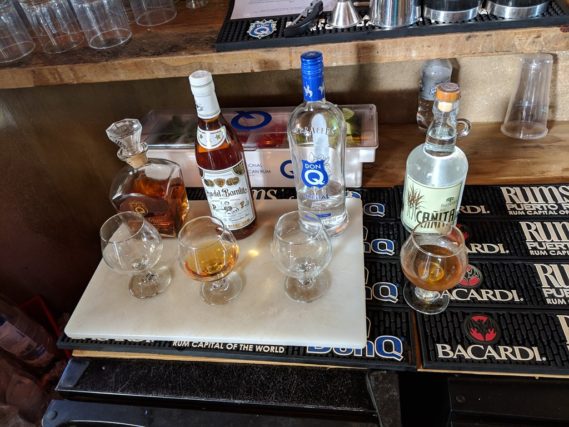 It was pretty warm in Puerto Rico, even in January. We made the right choice to chase the sun for our anniversary. We were also introduced to Señor Paleta. 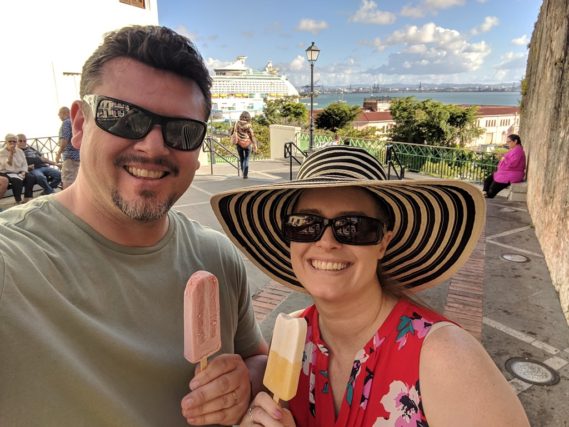 Later that night we returned to Lote 23 and actually got to try all the different street foods the chefs were making. 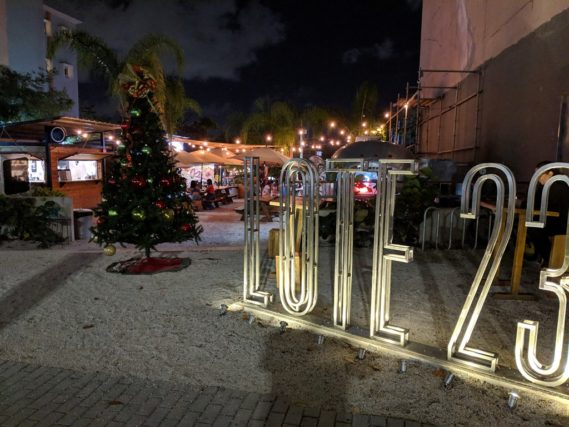 We even went in through the front gate this time.

I have to go take Adrian to his piano lesson now. He just gave me a PowerPoint presentation about why I should let him play Fortnite. Sometimes anniversaries are spent in Puerto Rico. Sometimes they are spent parenting. I love both. I’m lucky to be able to do both.

But maybe next year we can go back to Puerto Rico.

Thanks for reading this far. As you may know, Puerto Rico has recently suffered major earthquakes while still recovering from the hurricane a couple of years ago. Chef José Andrés formed the World Central Kitchen, an organization that brings food to disaster-stricken areas, and is currently distributing food in Puerto Rico with the help of many local chefs. Please consider making a donation to support them.