Friday was a good day. I managed to squeeze in a workout and feed my daughter to the ducks.

Er. Carefully set my daughter down in an area where many ducks were.

We went to the San Francisco Zoo, me and her, this explorer, intrepid adventurer daughter of mine.

She was very excited about it. 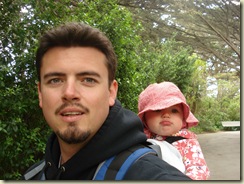 She is also growing up into quite the little monkey. 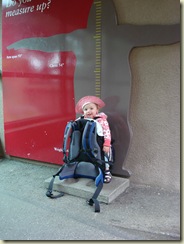 Doesn’t she look cute in that hat?

She loves wearing it. 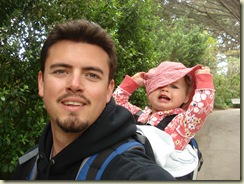 She was also quite pleased to see the chimpanzees in a close replica of their natural environment. Apparently the San Francisco Zoo found these chimps in the Charlton Heston future where they’ve developed mad construction skills and enjoy building forts. 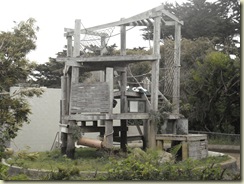 Because I paid $11 to get into the place, I thought it only fitting that we spend our time doing what we could only do at the San Francisco Zoo.

So we went to the playground and swung on yet another swing. 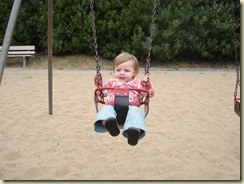 And we sat in the grass and ate flowers. 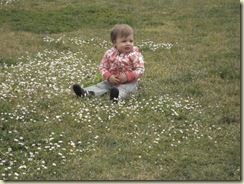 Finally we went to the Children’s Zoo area. And this part is serious: they have a neat little school house there that is open for free play, with their toys, from 2-3pm or so. They also have pre-arranged classes for toddlers. But the free play time, in the middle of the day, in a nice big room that I could lie down in, was just awesome. 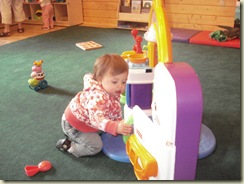 After the school house we went to the farm, and I let Erin molest the goats. They were not amused. Except for this one. Dude is smiling. 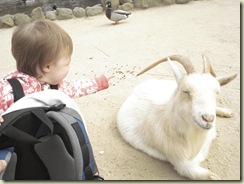 In partial revenge I allowed the goats to convince me that it would be funny to feed Erin to the ducks. Erin goes ape for ducks (yep, just linked the top and bottom of this post together; that’s just how I roll), and she was freaking out that these little guys were just wandering around next to her and swimming in the pond behind her. 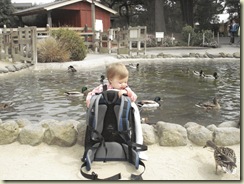 So I threw her in the pond and went to get lunch. When I got back she had tamed them all and convinced them to lift her out of the pond, dry her off, make her some lunch, and give her a present. 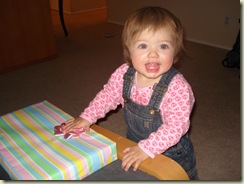 No. That’s a lie. The present was from her Tota.

Not a bad day.

“I totally saw ducks, guys. And a monkey. And some meerkitties. And a bunny. And some ducks. And my dad bought me a beer.”

No, sweetie. I bought you a ‘bear’. I got that beer for free.

Yeah. I’m a sucker like that. I’ll spend eight bucks on a bear she’s going to eat for twenty minutes and then throw out of her car seat on to the floor.

I’d do it every day if I had the floorspace in the car.