Day One: Thursday or "The Day the Camera Stood Still"

Erin’s 1st Birthday was Thursday. Because we are good (read: terrible) parents we took her to Disneyland (you know, because she’s been begging us to take her). This was her third trip to visit Mickey.

Let me explain something about my wife and I. We are a little bit insane when it comes to the Disney parks. My wife’s engagement ring? From the jewelry store in New Orleans Square. Proposal in front of Sleeping Beauty’s Castle? Check. Honeymoon to Disneyworld? Check. Multiple trips to Disneyland Paris? Check. Free Disney Cruise to the Bahamas courtesy of "Who Wants to Be a Millionaire: Play It!"? Check. Trip to Tokyo in 2005 where we spent more time at Tokyo Disney than we did anywhere else? Check. For a brief period in 2005 we had been to every Disney park in the world. Then they opened Hong Kong. Next? 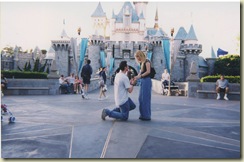 So, we’re starting Erin early. We took her to Disneyland when she was 7 weeks old (for Father’s Day), again at 8 months (for Christmas), and again for her birthday. We’re not too happy about the Disney Princesses obsession that some little girls have, and we’re going to try to temper that with some kickass Mulan-watching later, but we love Disneyland.

So, that was a long intro. Erin seems to love Disneyland too. We took her on Thursday. We went on lots of rides and even let Erin go on a few (Dumbo, Casey Jr., Pirates). The Dapper Dans sang "Happy Birthday" to Erin on Main Street: 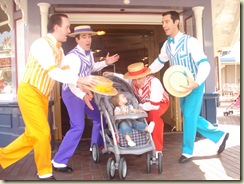 And we met Mickey in his house for the third time.

Ok. It was Emily.

So the rest of the trip was photographed by my mother-in-law (bless her) and by me on my Blackberry (bless Research In Motion).

That night, at dinner, Erin had her first birthday cake, and she fulfilled her 1-year-old obligation and destroyed it. 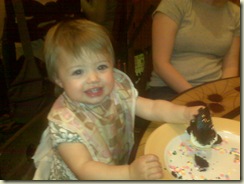 Friday was a blur, for more reasons than one. We had to buy all of the supplies for the party, which meant hitting up a party supply store, Michael’s, and Costco all in the same day, as well as peeking into Albertson’s. We then drove the supplies over to Emily’s aunt and uncle’s gorgeous house in Yorba Linda (next door to the lady who invented the Teenaged Mutant Ninja Turtles) and spent a little time there, putting food away and visiting with those lovely people and their 20 kids. No. Not 20. It just feels like 20, and there were visitors in town already and babies everywhere and it was just awesome.

After a couple of hours we headed out for Laguna Beach to take some pictures. Emily’s cousin is a professional photographer (and she took a bunch of shots at Disneyland that I have yet to see) and she was in town with her mom and her little boy, who is one year older than Erin.

Laguna Beach, in the Spring, at dusk, is awesome. (I say "awesome" a lot). 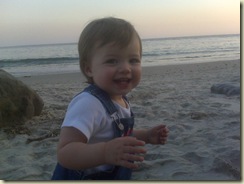 After pictures we drove up to Huntington Beach to have some BBQ at Mo’s. And it was awesome.

Then we went back to our Anaheim hotel. And as soon as we emerged from the elevator, vomit emerged from Erin’s esophagus.

I don’t know what triggered it. She had a couple of good coughs, and then urped all over.

We cleaned her up, thought about what she had eaten, wondered if it was just a water-flush from the dying-of-thirst-water-gobbling she had been doing at dinner. We put her to bed, and then we heard her coughing, sputtering, and barfing again.

Now we were a little worried.

We cleaned her up again and just held her on the bed with us. And she drifted off, coughed, barfed again. Now there was nothing left in her stomach, and she wasn’t taking the water we were giving her.

So, a 1:30am Pedialyte run for Dad. Back to the hotel, dose some Pedialyte (way too much, as it turned out…but she was thirsty).

So, a 2:30am call to the advice nurse at our home hospital. Smaller doses of Pedialyte, and only if she’s actually full-on awake. Don’t worry about dehydration until 8 hours of barfing.

Emily went to the other room to try to sleep and I lay with Erin all night, towels spread out beside me for her to barf on at will.

A 3:30am wakeup and more barfing. And then what seemed like 4 hours of uninterrupted sleep. For me and Erin.

Day Three: Saturday or "Oh yeah, we still have a party going on today at 1pm"

We watched Erin take some good amounts of Pedialyte in the morning. And I let Emily go to sleep once she had assured herself that Erin was fine (if very very very thirsty).

But the extra sleep meant a very late start on a day when we were going to do some last-minute party stuff: pick up the cake, decorate the house, pick up the rest of the food, start cooking etc…)

So we were in a bit of a rush when we pulled in to the cake shop to get our cakes (a big one and a little "smash cake" for Erin). And Dad, rushed, on his daughter’s first birthday, is not in a particularly good mood for hearing "I don’t see your order anywhere."

I tried to decide if I had the time to kill him before rushing off to another bakery to pick up a last minute cake that would not be Jellyfish themed. I didn’t. Have the time, that is. But I did have time, and the patience, and the "don’t get thrown in jail on your daughter’s birthday" presence of mind to double check that Gaby worked there. She didn’t. I was at the wrong bakery entirely. The bakery I had ordered from (online) was actually really close to the hotel and I had just wasted half an hour being a stupid Google-trusting ass.

Also forgot the Jellyfish DVD at the hotel.

So, we picked up the cakes at the correct, awesome bakery and they were awesome: 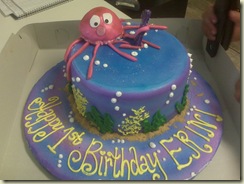 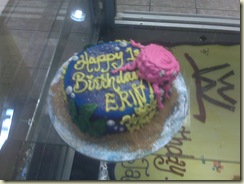 And we rushed back to the hotel so I could pick up the Jellyfish DVD.

And my camcorder. Gah. What a dumbass I was that morning.

And we rushed over to the house, arriving 5 minutes before the start-time of the party, but not before other guests started arriving, some of whom actually don’t know the hosts at all. Good times.

But, long story short (too late!) the party went off with a hitch (that’s not a typo), but it was still awesome. And I bbq’d awesome burgers and hot dogs and other stuff. And Erin fell in love with a dog. And she smashed the hell out of her smash cake, which is really what the day, and weekend were about anyway. 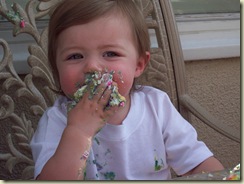 My little girl was healthy, and happy, and well-loved by the 35 or so people who showed up.

And I’d do it all over again, every bit of it, to see this face: 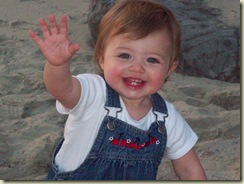