So, I managed to thoroughly embarass myself over on the Parent Bloggers’ March Madness Pool on CBS Sports that Chag put together. I managed to barely squeeze out more points than the guy who didn’t fill in his brackets. But, I was picking teams fairly randomly, never having paid attention to basketball. Like. Ever. Since this was a chance to do something online-bloggy-parenty I gave it a shot.

However, tonight I believe I’ve redeemed myself. Today was the end of the NHL regular season, and not only did my favourite team (The Detroit Red Wings) finish first overall during the regular season, but my Fantasy team on NHL.Com in the, um, “Star Wars” league won the championship, defeating the team that has plagued me all year. I drafted this team at the beginning of the NHL season, and they pulled through for me.

So, two first time Fantasy Sports attempts, one a failure, and the other an unmitigated success.

The reason why I won the NHL.com pool? My team name: The Weiner Dogs.

When Erin was about 5 months old we took her to her first county fair, a very lame excuse for a fair in San Mateo County. At this fair I won for Erin her first ever cheap-ass carney toys: Weiner Dog and Turtle. They are both plush disposa-toys, but she loves them, and I love to see her play with them. That was in August, and the draft happened in September, so The Weiner Dogs or The Turtles were obvious choices for team names.

Here is Erin with Weiner Dog and Turtle just seconds after I won them for her; if you sniff closely you can still detect that subtle hint of 20-day-unwashed-carney. 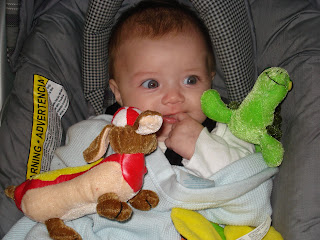