I heard a rumour that there was a place in San Jose with a giant rubber duck sitting on the roof. Because Erin is a duck fiend… 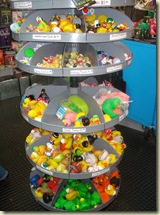 …I knew that I was going to have to bring her to see this canary canard. 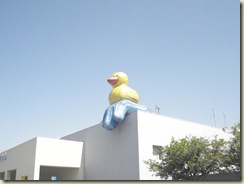 This place is the Children’s Discovery Museum in San Jose, and I can’t believe I waited so long to bring Erin here.

While plotting my zoo excursion earlier in the week I had also tossed around the idea of going to the CDM. Emily suggested we save the museum for the weekend so we could all go together for our first visit (we’d been to the zoo before as a family), so that’s what we did.

It isn’t free, and it isn’t cheap ($8 each for us, and after Erin turns one it will be another $8 for her), but they do have annual memberships available. After today, I’m seriously considering one of the family memberships, but we’re a little far for it to be a convenient, last-minute, what-do-we-do-today option.

But this place is great. From the baby storage lockers in the lobby 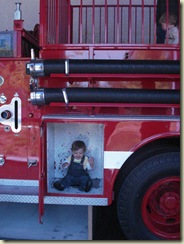 to the awesome crawling room within the pre-schoolers area 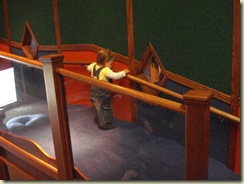 to the, um, super-cool Bench of Killing Time 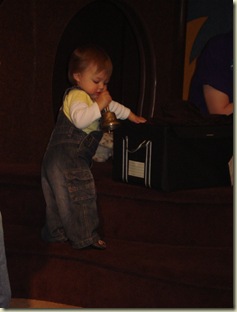 All kidding aside, the crawling room alone was worth the price of admission. That’s where we spent the majority of our time, and it was just one room within the pre-schoolers (0-4) area, The Wonder Cabinet, which also boasted a brief story time, a "let’s dump sand everywhere" area, a couple of arts and crafts areas, and a kitchen playroom.

Then there is still the rest of the building: a theater, a bunch of cool gizmos, several widgets, a couple of doodads, and a face-painting room. I didn’t take enough pictures to do it justice here, and we didn’t spend enough time there outside of The Wonder Cabinet to get a really good sense of the age-appropriateness of some of the exhibits.

But we’re going back.