I’ve written before about being a geek and doing geeky things like going to comic book/science fiction conventions, with Erin in tow. I’m not sure how it came to my attention, but there was a convention in San Jose this weekend called Super Con. I didn’t know much about it, and in reading the web site I concluded that it would probably be smaller than Wonder Con was, and that was smaller than Comic Con in San Diego. But Emily had some work to get done at the office this weekend and Erin and I hadn’t been for a good dadventure in a while, so last week I decided that I was going to keep it on my calendar.

I received a very nice e-mail from someone the other day.

“I saw your comment on Wil’s blog after reading Shakesville’s criticism of his post. You really, really nailed it for me. And it changed me a little bit for the better. For that I thank you.”

Last week I read this post on one of my favourite blogs, Wil Wheaton’s “Wil Wheaton Dot Net: In Exile”. I was inspired to comment on the post because a normally sensitive, sincere, and thoughtful blogger, who also happened to be TV’s Wil Wheaton!, had signed off of this post with what sounded to my eyes like an impolitic, careless, and almost disparaging remark:

“I’m not sexist. This isn’t sexist. That’s a stupid straw man, and if you try to make that claim, I will point and laugh at you.”

He claimed that such a label was a straw-man, meaning that it was a punching-bag of a target that saved troublemakers the effort of actually debating with their opponents. If the debate were about whether or not this post was written using 12-point font, then claiming that the post was sexist would be a straw-man attack. But in this case a very relevant issue seemed to be whether or not Hillary was maligned according to her gender rather than her politics, and in that way the issue of whether or not this post was sexist seemed very much on target; not a straw man at all.

So, in response to the claim that the post wasn’t sexist, I left a comment that was a little curt, but because I’m good at this I didn’t make it about him.

Others weren’t as delicate; I may have been the first to make the “this post is sexist” claim, but I wasn’t the last. He seemed flooded, by both antagonists, supporters, and sycophants. And although he eventually allowed that his statements in the sign off weren’t productive and maybe shouldn’t have been included, he seemed, more than anything, just frustrated that people were attacking him for the link.

I checked back a few times to see how the conversation was going, and I was directly addressed a couple of times in the comments, so I responded to those people. What I had said provoked its own miniature drama of criticism and support, but I’d be lying if I said I wasn’t really tickled that several other bloggers were referencing my words. I blog; I’m vain like that. Someone even went so far as to anonymously e-mail the webmaster at At Home Dad to leave a compliment. That was strange, but again, I’d be lying if I said I wasn’t pleased.

In the end, though, some of the people agreeing with me were also ending up a bit extreme for my taste. As I noted earlier, my comment was about the post, and not about the person, but the line was being blurred.

So earlier this week I sent an e-mail to Wil Wheaton, just letting him know that even though I was the first, and most vocal, critic of the post, that I hadn’t made it about him or his politics or his writing or his choice of socks. He still had me as a reader. 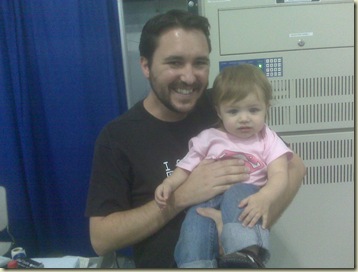 Sorry. Was that too fast? Heh.

I saw on his blog that he was going to Super Con, and since I was already considering going I thought I would take the opportunity to meet him in person. I’m a fan. I’m a geek.

And Wil totally failed his Save-versus-Cute roll. (For those who don’t get that one, well, go back to 1985 and pay attention to what the kids playing D&D at lunch were mumbling about.)

“Hi Wil, it’s nice to meet you. I’m Shawn. This is Erin.” That last with a nod over my left shoulder at the cute-ball peering at her mom’s junior high crush.

He made the mistake of noticing how cute she was, and a second of extending a finger in her direction. She promptly grabbed said finger and refused to release it for at least a minute.

We chatted idly for little while (really, he just gushed over Erin, and who could blame him?), and then he moved the conversation away from the precipice of awkward silence that it seemed sure to approach: “So, did you want to exchanged some shiny gold rocks for something?”

Wil’s reason for being there, apart from just the fact that it’s a comic convention and he’s a con-geek, was to promote and sell his books. And I was more than willing to oblige him.

“Great. Should I make it out to ‘Shawn’?” he asked, retrieving his autographing marker from the table.

Interestingly enough, the conversation did not immediately turn to the Hillary Clinton post. Instead, his first question was about whether I really backpacked.

“Well, I backpack in this way,” I said, hunching my shoulder forward so Erin was reintroduced into the conversation. “I don’t hike up mountains or anything.”

And then, completely at ease and genuinely engaged, he waxed mountainous about hiking, climbing, and the feeling of owning a hill after climbing it. Or possibly he was describing the feeling of pwning the hill; he is a geek, after all.

We talked for a little while about the post, the comments, the aftermath, and I assured him again that he hadn’t lost me as a reader (like one reader he doesn’t know matters; but it really seemed that one reader did matter to him, so I didn’t feel strange standing in a position of reassuring him) and that the personal attacks were stupid. He spoke at some length about how upset he was about being accused of sexism, and he really did seem bothered by it. He hadn’t changed his opinion of the post: he was still convinced that the term “psycho ex-girlfriend” is not sexually charged. I disagree. But that’s it, really. We disagree about that. I don’t think this says anything else about the man’s character, and it doesn’t make his blog or books any less worth reading.

Later, after his Q&A session (which was mysteriously moved up 2 hours) I approached him with one last thing.

“HeyWilgoodtalk.” (Gah. What a stupid way to open.)

“I neglected to mention earlier that my wife had a huge crush on you when she was 14.”

Why did I tell him that? Because Emily asked me not to. And that’s just how I roll.

And Just A Geek? Awesome.

1 thought on “Erin Goes to Super-Con”