I’ve been going to the gym fairly often lately. I like the facility, the equipment, the ability to watch the hockey game while I do crunches.

Most of all I like the childcare center. The staff members are fantastic, and Erin likes them all a lot (not that she has any stranger anxiety anyway). She gets a chance to play with other kids for an hour, and because I tend to go at the same time every day she usually gets to play with the same kids.

I also get to play with the same kids…er…"work out alongside the same adults". There are the two moms who always come in around 11:30, one of whom, S, I know from outside the gym; she ran some New Parents groups at the local parenting center and Erin and I used to go there a lot. There’s the middle-aged banker-looking guy who always comes in at 11:15 and runs on the treadmill for half an hour (I hate him for his ability to run for a longer period of time at 50 than I ever could at 16). And there’s the forty-ish (I actually know exactly how old he is; he’s 46, but more on that later) looking guy who comes in and works with one of the trainers for an hour, pulling piles of weights across the room, balancing on half-spheres and shadow-boxing, or doing a gamut of stair drills.

I always watch this guy when he’s working out; he’s built like a tank and doesn’t seem to be working out to lose weight or tone up or get rid of a spare tire. He’s working out like it’s a job and he needs to be able to move as many mountains as possible in a short period of time. He always seems to be in while I’m there, and I feel really really guilty about not trying to lift the stationary bike over my head or do somersaults down the stairs; the guy is working out like he means it and it keeps me from feeling good about putting in my hour on the elliptical and doing chest presses and ab exercises.

We finished up about the same time today, meaning I got up from the mat where I was doing very little, and he put down the elephant he was using for bicep curls. We went out to the water jug, poured some water, and then I went upstairs to clean up while he went out the door.

After I showered and picked Erin up from the day care center (where she has taken to signing at them when she would like her diaper changed) I walked out to the car. The two moms were just getting into a minvan across the street and as they pulled away S waved, rolled her window down, and said: "So…working out with Steve Young today huh?" 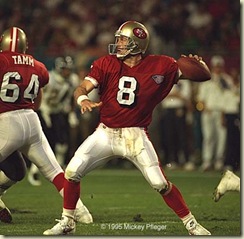 Maybe he’ll babysit Erin sometime for me. If I spot him with that anvil he’s doing bench presses with.

At the very least, I think I need to stop staring at him. He probably thinks I’m a fan and that I recognized him. Nope, I’m just self-conscious about what a gym-wimp I am when I try to work out next to him (or anybody else). It’s all about me really.

Even in a room with a 46 year-old Hall of Fame quarterback, it’s all about me.