I took a call from one of my mom friends today (aside: took a call? really? ought I to have had my assistant check to see if I was available?) and she told me that Barenaked Ladies were promoting their Snacktime CD at the Barnes & Noble at the Hillsdale shopping center.

Sweet because I’m so Canadian, and so Ontarian, that I had a copy of their demo in high school; not a demo tape, but a copy of a demo tape. My friend made it for me and we listened to it on a drive to Toronto to go watch the Victoria Cup game at Skydome. Those were the years during which geeky pop-folk groups like BNL and Moxy Fruvous and The Arrogant Worms were just about to break, and I had demo tapes (or copies of demo tapes) for all of them. They were like memes, passed from friend to friend, and you were definitely paying attention to the music scene if you knew who they were before they popped up on Much Music. (another aside: Mike from the Arrogant Worms used to tend bar at the Grad Club at Queens and the Worms were campus folk heroes on par in Kingston with The Tragically Hip, okay, that’s an exaggeration, but they were big for a couple of years (an aside within an aside: The Hip went to my high school….a couple of years before I got there…dammit) and I had a couple of good nights underaged at the Grad Club watching them play because my dad’s girlfriend was friends with him.)

So, fast forward, oh, fifteen or sixteen years (holy crap) and there I was, with Erin on my back, my Californian wife standing by my side as we bopped along to BNL as they played "If I had $1 000 000". Emily remarked that (a) they could have sold tickets and done an actual show instead of a 30 minute spot at a bookstore, and (b) it was kind of sad that they were doing a 30 minute spot at a bookstore instead of selling out a concert venue somewhere like the goddamned Wiggles. I chose to see them as completely in love with performing for small groups.

Erin was rocking out, dancing from side to side in the backpack, making faces at her baby friends who were there with us. It was a perfect little family moment, and I felt like a pretty good dad.

This was the closest we got, and the best picture I could take on my Blackberry with the freakin’ window in the background saturating the screen: 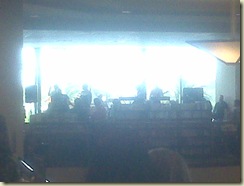 We went downstairs. One of our mom friends left, the other jumped into the cashier line, holding her son while pushing the stroller, and we grabbed a CD from a box at Information and went to check out. There was a woman with a stroller and a walking kid behind our friend, so we lined up behind her (actually, kind of at a right angle to her). Mom-friend saw that I had a CD already and asked where I found it. I pointed back at Information; she looked torn. I asked her if she wanted to go grab one, and she said "sure" and walked over.

She left her stroller in line (I had kind of moved toward it when I asked if she wanted to grab a CD), so I pushed it through until we were up front. We were just at the register when she came back, sans CD, and I noticed that they had a box of them at the register, so she picked one up at the front. We paid for our purchases and walked toward the entrance.

Wow. Exciting right? This is, so far, the best story I’ve ever told, yes?No? Fine.

How about if I tell you that while I was pushing the stroller toward the register I looked back at the woman we had originally lined up behind, and noticed that she was not, in fact, pushing a stroller.

She was pushing a wheelchair, and in the wheelchair was her severely disabled nine or ten year-old daughter.

Yeah, I noticed. And I continued through the line, all the way up to the register, paid for my CD, and joined Emily at the exit.

"So, I totally line-jumped that woman we were standing behind."

"I swear I didn’t realize it until we were almost at the register."

"Well, the point at which you realized it would have been a great moment to let her go ahead of you."

There is no but. Except for me, and I’m more of an ass.

I turned around and caught the woman before she reached the exit.

"Ma’am? I’m so sorry; I completely stole your place in line. It was pretty rude and I’d like to apologize."

She played it off casually, pretending to be surprised that I had anything to apologize for: "Oh, that’s ok. I didn’t even notice. More time in the air-conditioned building anyway."

I walked back to Emily, feeling very proud of myself. I had manned up and apologized for being a total ass-hat. I had done it with nothing to gain except self-respect and the respect of my loving wife. A big grin started to break across my face as I saw Emily smiling at me.

I should have realized that it wasn’t her loving smile; it was her "I’m on to you" smile.

Good concert. They could have sold tickets.