I’m jumping on a bandwagon, setting fire to it, and leaving everyone who noticed said bandwagon writhing in agony at the sight before their eyes. If FADKOG, Ali, and Megan are the fearless pioneers and homesteaders full of Manifest Destiny and expanding west of the Mississipi, I am the Sioux Chief who says "Dude. Remember that treaty and the whole, ‘Oh, we promise we aren’t going to go anywhere outside of this small band of land we are using as a way to get from one side of the Dakotas to the other,’ thing you swore? Yeah, see those Black Hills you and Custer are standing on? Not part of the deal. Best circle your wagons because I’m about to burn them down and adopt your children into my tribe."

The hell? What am I talking about? That’s a load of nonsense, and a poor metaphor, but I’m gimping along today because my brain is exhausted from trying to outthink people at a hundred miles an hour, and my hamstring is broken from trying to out-lunge people at a much slower rate of speed than that. I am out of shape, and fencing is hard.

Things that are the tits are great. But, you know what? Some things are not the tits. Some things are the moobs. These things suck. They suck like a twisted fetishist gagging on a moob.

Sorry. You don’t know what a moob is? Loralee has a picture that ought to make it clear: 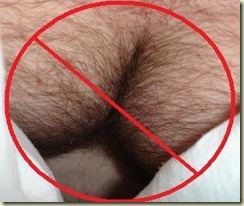 (Note: I am in no way implying that this is a picture that Loralee took of herself. Don’t send me hate mail. That means you, Tanis.)

Ok, now that you have the idea (and if you still don’t I’ll spell it out: Man-Boob. Moob.), here is a list of Things That Are "The Moobs":

Big Bird’s Birdketeers. Why can’t they just leave Oscar the hell alone? I was watching an episode of Sesame Street and they went up to Oscar’s can where he was sleeping or something and just started singing/counting at the top of their lungs and when he came out to say "Yo, @(W)hoorl @(T)hebloggess @(F)adkog dudes?" they laughed and told him he had to sing and count with them. I love kids. I love kids singing. But if some neighbor kids started yelling outside my window while I was napping I’d be grouchy too. I’ve started to have a lot of sympathy for Oscar. I now call him Oscar the Victim.

Leafblowers. Even worse than the Birdketeers, because these suckers always show up during my naptime. I haven’t had a good nap in weeks.

People who wave me through at intersections. I know, this sounds weird, right? I mean, what could be mooby about people who stop their cars at stop signs and insist that I go first, whether I’m on my bike or driving? They’re so nice. Yes. But if I’m driving or on my bike I don’t need people to be nice. I need them to be predictable. So when I stop at an intersection I just need everyone to do what they are supposed to do as good drivers, and the world will work like clockwork and I don’t have to sit there insisting that "No, really, you go and stop making me look like an ass for waiting my turn."

Politics. Stop making me look like an chump for playing fair.

Yes Dear. Because every time I watch this stupid show (why am I watching it???) I think "Yeah, brutha! Tell it like it is! Kids really are like that! Marriage really is like that!" Dammit. Then I take a nap (or try to, if the leafblowers aren’t out) and when I wake up I remember: this show sucks.

Hamstrings. Because when they hurt they hurt in a way you don’t notice until you stand up and try to chase your daughter around the living room.

The end of summer. Because as the summer ends, so too does my year at home with Erin. I return to school full time at the end of September, and Erin goes into daycare. That’s all I have to say about that right now.