As she scampered from the Ikea Poang chair to the Ikea side table she looked like a little monkey. I know, they all look like monkeys. That’s why we call them little monkeys so often. But really, there is no other, better metaphor. A monkey moved hand-over-hand, butt high in the air, from the chair to the table, and then evolved and stood erect.

She had just finished a long bout of "climb onto the back of the high chair in a way that will make her mother freak out", and for some reason I was more nervous about her standing on the side table than I was about her using the high chair as a jungle gym. 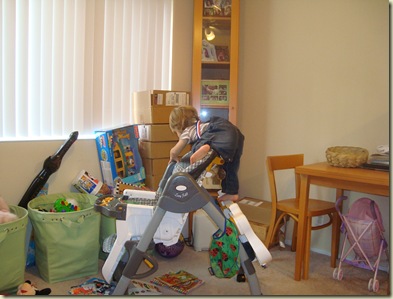 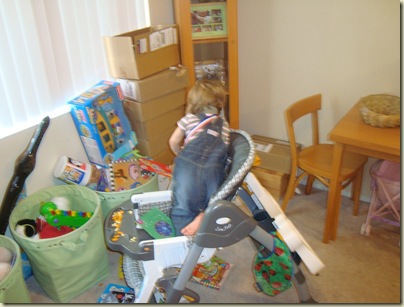 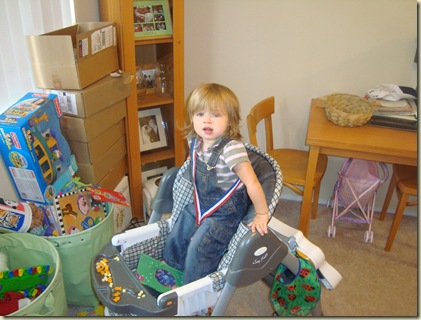 Why yes, that is a medal around her neck. She is the champion furniture climber ’round here.

A blank stare at me, a look over at the television to see if I was still watching the Nine Inch Nails concert on Palladia HD, and she continued to stand upright. Uncaring. As though I hadn’t spoken at all.

"E-rin. Sit down!" And again I flashed the sign.

Once again she ignored me. A brief glance, a moment, but she was more interested in the near-bald Reznor on the screen.

I was a little exasperated. How dare she? Was I going to have to get up from my comfortable chair to let her know that I was Dad and I was to be obeyed in all things? How was I ever going to train her to go get beers for me by the time hockey season began if she wouldn’t even sit when I told her to?

One last time. Reaching deep into my bag of tricks, my near-forgotten lore, old stories about training wild monkeys and soothing savage beasts bubbling to the surface of my brain and connecting me to the long line of parents who had gone before me, embarking on this perilous journey through obedience and respect…

And she plopped down immediately, grinned at me, repeated "please" and showed me how to sign it properly.