She was so gooey.

I knew babies involved goo, and that you kind of signed on for that as soon as you scribbled on the dotted “unprotected sex” line at the bottom of the Doin’ It contract.

And I’d seen plenty of movies in which someone, for the sake of their filmic “art”, had hosed one down with chicken-jello or something and tried to convince the audience that “Hey, this is a newborn, and not in fact a 2-year-old child that we’ve spray-painted with chicken-jello!” And there was goo everywhere.

But still, I was a little underprepared for the gooey-ness. She was balling, and wailing, and she didn’t quite know what was going on, and she was covered in goo.

She still is, really: Every time her daughter looks up at her and says “ha-ppy” with a great big smile on her face. 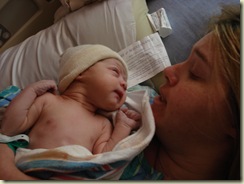 My wife: a gooey mess.

In my travels around the blog world tonight I noticed that I could enter to win some gift baskets or something. I’ve been looking for someplace to keep my testicles since I’m clearly not using them, and I thought “Hey, a basket would be perfect. Then I could line it with some of that Easter grass and toss some jellybeans down too so my marbles would look huge.”

Well, wonder of wonders, the requirement for winning one of these gift baskets (which actually have stuff in them already, Bonus!) was that I write a post “reminiscing about those new baby days.” Hey, I can do that. I can “reminisce” like nobody’s business. I reminisce all the time. Like that one time, when I had that sword and invaded two countries in the same night.

But why? Why reminisce at all? I mean, apart from the obvious reason that I can finally have a place to store my balls?

Oh, because some other ladies (I say “other” not because they are “other than my wife” but because I am again comparing my de-testicled self to a woman; and of course I know that there is a lot more to being a woman than merely lacking something that a man has, and no, I’m not going to insert a lame/awesome “like common sense!” joke here, although some people might expect me to and those people are appalling/awesome) are getting ready to get all gooey. Like my wife they will be balling, wailing messes, and some asshat is going to take pictures of them while they’re all vulnerable like that. So, to make up for the lack of consideration that husbands everywhere have when it comes to taking pictures in the delivery room, I’d like to participate in the Virtual Shower for Kristen and Rebecca.

Get ready for some goo, ladies. No…er…that’snotwhatImeant.

But she’s ridiculous now that her brains have been replaced by goo. No common sense whatsoever.

(Editor’s Note: As my goo-brained wife has so delicately pointed out to me, I don’t know the difference between “balling” and “bawling.” Or, rather, I don’t know how to spell “bawling” when I mean “bawling” and instead I write “balling” which means something different entirely and just isn’t appropriate at all for this post here. Gah. Smart wives are the bane of every stupid husband’s existence.)