But you knew that, right? Because: I Tweeted the entire damned time. You grew sick of it; you un-followed me; you unsubscribed to the blog; you made little BPD’s and burned them in effigy. It was shameless, shameful, disgusting, and really just me bragging about the awesome time I was having. I’m sorry. I really am. I have no class.

I have even less class than you think. I’m going to re-live the weekend for you via the Tweets, with a little added detail here and there as seems appropriate. Because you care about every tiny detail (I’ve used an italicized phrase beginning with “every” twice now in this post; I’m a great writer.) It’s going to be long, arduous, and I doubt you’ll make it to the end, because I’m not that interesting. 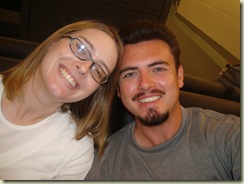 Why at 4:55am you ask? Because it was the redeye from San Francisco. All times are Pacific Standard Time.

I can be even more inane. Wait for it.

Walking through Times Square, to go to Red Mango, which I could totally go to at home. 12:08 PM October 03, 2008 from TwitterBerry Because seriously, I didn’t need to fly to New York to go to a yogurt shop. Women. Can’t live with ’em, can’t leave them at home while you avoid yogurt shops.

Self-explanatory? This Tweet just means that I changed my shirt.

But I can go the rest of my life without seeing Regis and Kelly again. They were on a loop every 10 minutes in every cab, talking about what a great cab we were in and how awesome the little tv’s are.

Dinner at Freeman’s in the Bowery. Smell that sweet hobo urine aroma. 02:51 PM October 03, 2008 from TwitterBerry 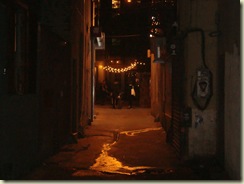 This place was at the end of dark, scary alley. There were stuffed animal heads on the walls and the restaurant served rabbit. Emily won’t eat anything cuter than she is, though, so she had a cheese plate. I had a steak, because no cow is cuter than Emily.

So, as dinner was winding down we jumped in a cab to go to Broadway for this show involving muppets and sex and swearing. But the cab took forever and we were going to miss the call, so we jumped out of the cab a couple of blocks away and ran (Emily was in heels) down the street, shoving lame theater-goers (lame after we had knocked them to the ground and stomped on their ankles, anyway) out of the way, and we just beat the curtain.

Avenue Q was awesome. Show-stopping number was “Schadenfreude“, a duet between a muppet and a woman playing Gary Coleman. Un-real. 07:15 PM October 03, 2008 from TwitterBerry

If that doesn’t tell you exactly what Avenue Q was about, I don’t know what else to say about it.

Just ordered a 20 year old Linkwood scotch to follow the 15 year old scotch that no longer takes up residence in my glass. 08:42 PM October 03, 2008 from TwitterBerry

Housekeeping tried to walk in on us twice. Because when we got back to the hotel we didn’t have the presence of mind to put the latch on or put the “Don’t even try to open this damned door” sign up.

Having brunch at Gold St (which is on Gold Street, coincidentally). Then we go searching for New York. 09:57 AM October 04, 2008 from TwitterBerry 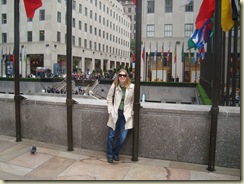 I know. I’m a sucker for tourist traps.

There were entirely too many strollers and happy family-types hanging around Central Park for my “abandoning my child at home with grandma” comfort. 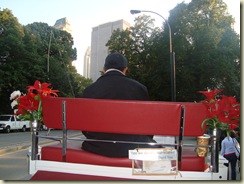 Seriously? 15 minutes? What about those long romantic tours around the park that I see in the movies?

At FAO Schwartz looking for that big keyboard thing. 02:40 PM October 04, 2008 from TwitterBerry

Two store employees playing Bach’s Toccata and Fugue in D Minor on the big piano at FAO Schwartz. Made my day. 02:56 PM October 04, 2008 from TwitterBerry 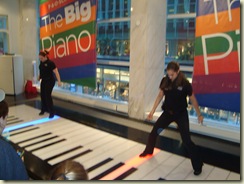 After I Tweeted this I had the following conversation with Emily:

Emily: You’re going to hell for Tweeting in here, you know.

Me: What? I’m not Catholic.

Out to dinner with the Hot Blogger Calendar folks. A big dinner with a whole lotta people who don’t know each other ;} 05:27 PM October 04, 2008 from TwitterBerry 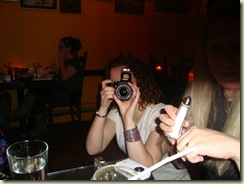 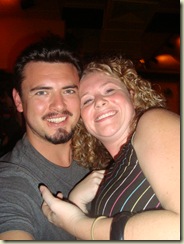 (Me and Miss Britt) 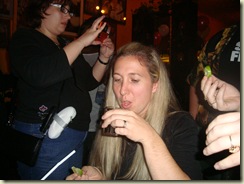 (Jane Porricelli does her first tequila shot. With her parents looking on.)

So, in case you didn’t know it the excuse for the trip was that somehow enough of you clicked on a little button over at the Hot Blogger Calendar site for me to show my boobs to the world, all at my own expense. Well, Emily’s expense. It’s not like I work, right? I’m just a dad. Lazy dad. Slacker. Sitting around the house all day.

Currently singing “never gonna give you up” in a shop. NYC: you have been Rickrolled. 09:19 PM October 04, 2008 from TwitterBerry

In actuality New York Rickrolled me. I was only singing it because it came on the speaker system in the store.

Thank you, kind cabbie, for agreeing to drive us down Broadway at lethal speeds at 1am. Your samaritan act will not be forgotten. 09:56 PM October 04, 2008 from TwitterBerry

Wil Wheaton won’t be in the Hot Blogger Calendar, but that’s not stopping Emily from watching “Stand By Me” in our hotel room. Dammit. 10:13 PM October 04, 2008 from TwitterBerry 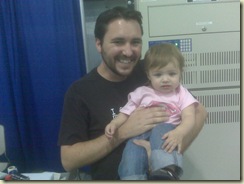 Tequila stings a little in the morning.

That’s right. I know what Spanx is/are. Even if I don’t know if it/they is/are singular or plural.

In a cab on the way to the shoot that I will be late for because I totally took too long styling my hair. And it looks like it always does. 08:59 AM October 05, 2008 from TwitterBerry

It really did. My hair always looks the same.

Seriously girls, I almost made out with Busy Dad myself, because he is just that hot in person.

Photographer had me lying on the floor with my hands behind my head. I feel so dirty now! 10:04 AM October 05, 2008 from TwitterBerry 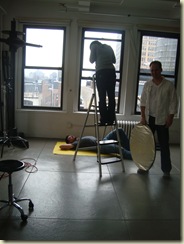 I don’t want to think about it! Oh, the shame!

My shoot is over. I may or may not have taken my shirt off in front of a room full of women. Not for pictures. Just cuz. 10:16 AM October 05, 2008 from TwitterBerry

I totally did. Twice.

Walking around Grand Central Station, no longer a Hot Blogger: just a geeky tourist with a camera and a Blackberry. Tweeting. 11:31 AM October 05, 2008 from TwitterBerry 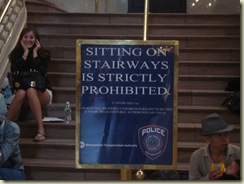 It was so matter of fact that I didn’t even think “hmm, there could totally be a bomb in that Papyrus bag”. Oh, that’s right, because there is no way in hell there was a bomb in that bag.

Progress down E42nd Street abrupted by the Polish-American Day Parade down 5th Ave. Not one Polish joke overheard. 11:56 AM October 05, 2008 from TwitterBerry 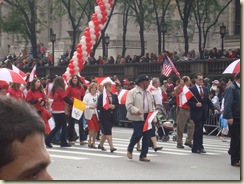 This parade went on forever. I think it even impeded traffic on the other side of town in the morning. 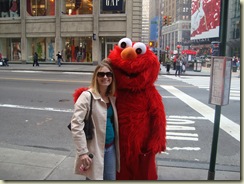 Grover was turning tricks the next block over. 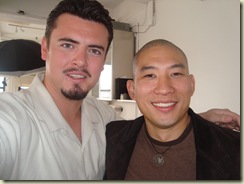 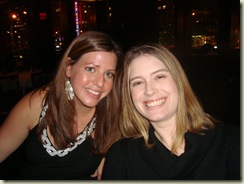 Paid just enough money for a sampling of some very, very good steak.

At the top of the Empire State Building. Taking pictures in the dark. 08:22 PM October 05, 2008 from TwitterBerry 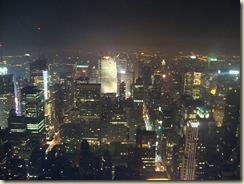 If you are going to go to the Empire State Building and you don’t care about, you know, seeing any buildings or anything, I highly recommend going at 11pm. There is no line whatsoever.

This will not end well. You know that, right? 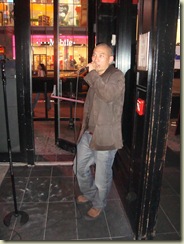 Ladies, he sings too! 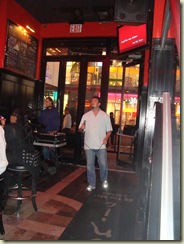 This was incredibly painful to attempt. Because not only is it a half-step out of my range, the entire freaking song is within a couple of notes of each other, so it wasn’t just the high notes I was missing: it was basically all of them. Also, I’d only had one beer so I was in no condition to do karaoke; I need at least 4 beers. Of course, with that much beer I’d have really been straining to hit those notes. I should have done a Johnny Cash song. But thank God for forgiving, drunk, New York karaoke bar patrons who didn’t actually boo me. But I walked off the floor like a rock star, flashing a double Sign of the Devil and sticking my tongue out as if I hadn’t just murdered an awesome drinking song. Then my lovely wife had to go and show me up by knocking out some Ace of Base. 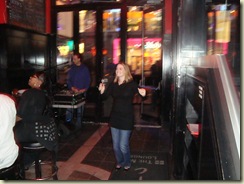 The long day is over. Early flight out of JFK tomorrow morning. 10:20 PM October 05, 2008 from TwitterBerry

It’s fun to ride in the back of a cab without wearing a seat belt. Only been thrown against the partition twice though. 05:20 AM October 06, 2008 from TwitterBerry

Really, I ought to have learned my lesson after the first time. But I’m slow like that in the morning. Also? The hour-long cab ride into New York from JFK really only takes 20 minutes. Who knew that all you needed was a cabbie willing to take pedestrians and school buses down with equal glee?

I mean, I like them. But what jackass made this call: “We’re going to have little arcades in the big lobby areas, and they’ll be a ton of fun, but we’re only going to have two games. And those games will be 25 years old. But new copies. Nostalgia should be powerful enough to get them to plunk quarters down every 10 minutes and 20 steps. Right?”

And that was that. 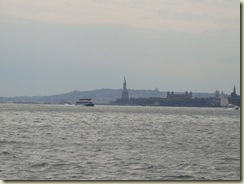