Now that I’ve returned from a fabulous vacation and gone on a little political rant and stayed home sick all weekend long it’s time to let you in on the real reason I went to New York:

See, located deep in the West Village is a stationery store (it is also stationary, as in it doesn’t move around) that possibly pretentious people who are “in the know” would probably describe as “the _____-est little stationery store around” where “____-est” could be “cutest”, “eclectic-est” or something else. And locked away within the heart of the _____-est little stationery store in the Village I came away with these, the Best Damn Blog Giveaway Prizes in the History of Blog Giveaway Prizes: 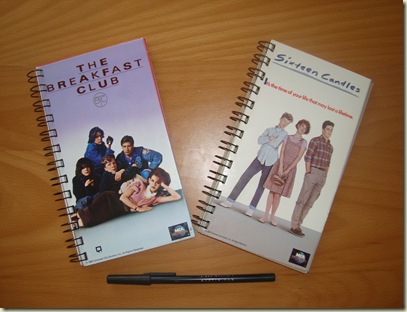 That’s right. Not one, but TWO official notebooks from classic John Hughes movies. Adding up all of the costs (transportation, hotel, meals, and the actual cover prices) these two notebooks cost me (or Emily) literally thousands of dollars.

And one of them can be yours. How, you ask?

Between NOW and 11:59pm on Thursday simply write a blog post describing in great, painful, humorous, depressing, sexy, angry, or emo detail which character from either The Breakfast Club or Sixteen Candles most resembles you. Leave a comment below with a link to your blog post, and on Friday, by fiat most arbitrary, I will declare the winners.

Check back here often to read through the links and wonder aloud if one of them is going to get the notebook that by rights should be YOURS.

T.: Let Me Paint You a Picture