We went to Disneyland for Christmas. If you know us at all well, you would know that you could probably insert just about any X for "Christmas" and you would still have a true statement:

"We went to Disneyland for a birthday."

"We went to Disneyland for dinner."

"We went to Disneyland for a slumber party."

In early December I was asked by Jane, co-founder of the Hot Blogger Calendar and co-founder of MomGenerations, if I wanted a camera.

"You told me during the calendar photo shoot that you thought the little RCA video camera I was using was cool. They want to give you a camera. Do you want it?"

"You are a strange person. No. Well, hang on. Do I have to sell my soul to RCA if I accept their camera?"

Is this a post about Disneyland or a camera review?

I don’t know. The camera, I suppose. It is kind of cool. It has some pretty basic functionality, shooting either low-quality clips for fast upload to YouTube (it’s co-produced by YouTube or something) or higher quality clips for really really really slow upload to YouTube, where you don’t notice the quality difference at all because it all looks grainy anyway so you might as well shoot everything low res. It has a flip-out viewscreen so you can film yourself and watch yourself at the same time, which you can’t do with point-and-shoot cameras with built in video recorders.

Is it a camera for me? Maybe. Probably not though, because I’m an insane father and I bought an insane camcorder right before Erin was born because I didn’t care about going into debt for life I was going to be a father and I needed to document every detail in high quality clips!!!!!

I also already have a point-and-shoot pocket camera that has a decent video recorder built in. We have a bad track record with these little cameras though, so it’s nice to have a more durable feeling one that I can take out somewhere the more delicate point-and-shoot wouldn’t like very much.

It probably wouldn’t be my default for grabbing quick video. In fact, I shot some video last night and I pulled out the insane camcorder rather than the RCA, because, as I mentioned, I’m an insane father and I record for personal saving, mostly, not for quick public broadcast. I like ultra-high-quality video.

But you can plug the RCA straight into a USB port for downloading video to the computer, so there’s no fidgeting with memory cards or cords. And hell, the thing is small. It’s a pocket camcorder. 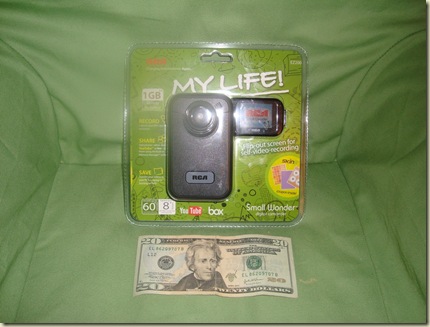 I guess its real advantage is the integration with, and optimization of video for, YouTube. I’m just not that much of a YouTuber, so it doesn’t occur to me to take video for the purpose of uploading quickly. I don’t even post video here on the blog that often, so I miss out on what is the main benefit to using the RCA Small Wonder. I don’t know that having it will change my habits. It’s probably perfect for a teenager with limited funds to buy and bring to a party so he can catch Michael Phelps smoking a bowl.

Here is a long-ish video of Erin wandering around the park, interfering with the flow of traffic, and inspiring people to give her things.

Some footage of Erin having potatoes and playing peek-a-boo:

And here is my favourite video from the trip. It’s just so full of dad-ness and relationship-ness, even though it’s only forty seconds or so.

And although you can’t tell from the footage unless you have already been, we really were at Disneyland. 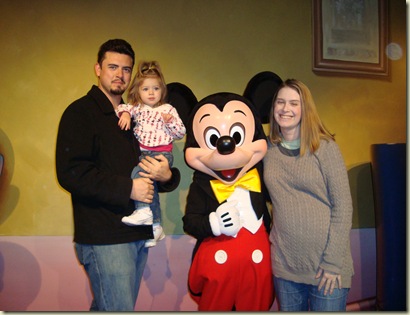 To sum up, although RCA didn’t sponsor our trip to Disneyland they sure as hell gave me a camera, and I used that sucker. So thanks RCA!