“Let’s go away for the weekend. Let’s just go.”

“Where? Ugh, it’s such a pain in the ass to pack up all of Erin’s crap. Just for a weekend? Seems like a waste.”

“How do we go on a trip without bringing the car seat? The stroller? The pack n’ play? Especially anywhere interesting that isn’t just a place we’ve driven to twenty times already? We can’t rent a car if we don’t have the car seat, and I don’t trust rental car company car seats.”

“You are Backpacking Dad. Let’s take the backpack for her, and a small carry-on for us, and go somewhere we won’t need a car to get around.”

And that’s how we found ourselves on a plane out of San Jose International on a September morning, holding Erin on our laps as we sat just a little bit stunned at the freedom we felt traveling in the fashion we were. A few diapers were in the backpack, along with a cup, a plastic fork, some wipes, and a couple of changes of clothes for Erin. We’d need more diapers, and food, and milk, and probably countless other things, but most things could be purchased in discrete quantities in a city like Seattle. The flight wasn’t so long that we needed to load up with distractions for the kid.

We left the car, and the car seat, in the airport parking lot, having found that the downtown hotel shuttle was a large bus, not a van, making a car seat unnecessary. We booked a room at a fancy downtown hotel, splurging on a room close to the center of the city in order to both cut down on distance travel and to ensure that the quality of crib offered would be superior enough for us to feel comfortable letting Erin sleep in it. It was a two-room suite, expensive, but worth it if it meant Erin could sleep in her own room.

As it turned out whoever designed the two-room suites at the fancy hotel never thought guests would actually want the rooms to be, well, separated. French doors divided the bedroom from the living room, but instead of anything remotely sound-damping like glass, or even wood, the doors were just frames draped with linen. Translucent linen at that. So not only were they not sound-proof, but they weren’t even opaque enough for genuine privacy. They might as well have just drawn a line on the carpet and labeled it “door”.

The weird two-but-really-one-room suite setup was a detraction, but the crib set up was fantastic. The crib came with a full set of baby bath products and powders and soaps, all the things we didn’t bring with us but thought we’d buy at a local store then have to leave behind because they were liquid and we flew on an airplane with only carry-ons and the TSA would have a fit if we tried to bring shampoo on an airplane. What’s more, there was a stuffed animal in the crib and also the cutest baby robe I’ve ever seen. 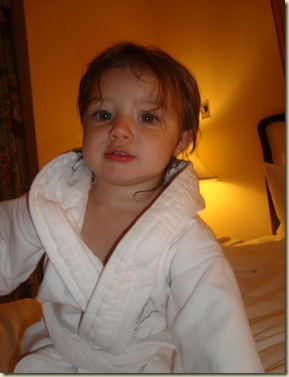 You can’t tell from the picture, but that sucker was monogrammed. Of course we stole it. Or I think we did. I mean, I’m sure it ended up coming home with us but they never billed us so I’m not sure that it wasn’t just a free baby robe to begin with.

Outside of the room we wandered…

Down to Pike’s Place Market and Victor Steinbrueck Park, where Erin strutted about and Emily mom’d it up. 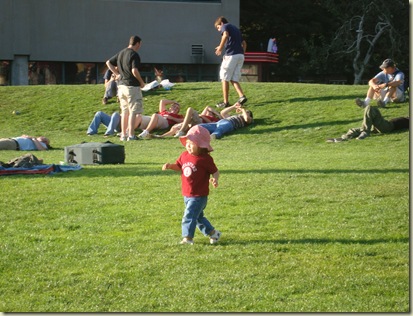 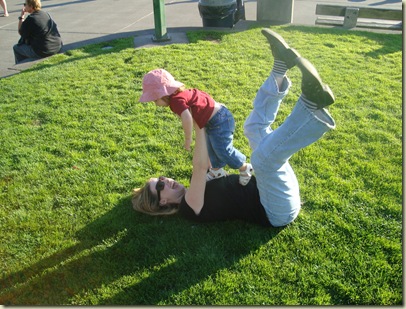 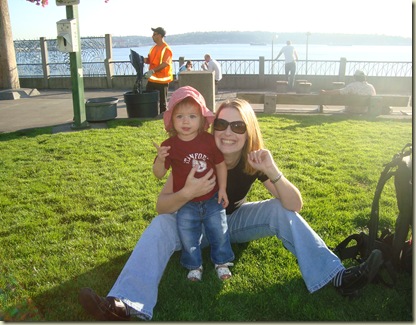 Backpacking around the Market we stopped at the world’s first Starbucks. 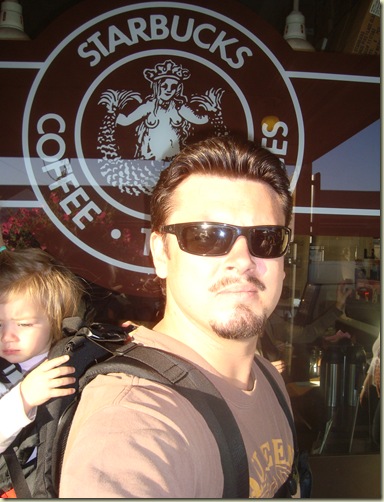 I dad’d it up by sticking things on Erin’s face and taking pictures of it: 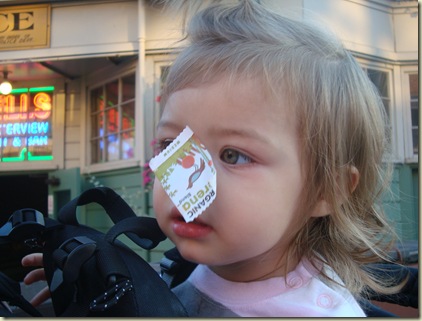 We ate at small cafes and at a family seafood restaurant, at the mall and at a food court next to the Space Needle with tiny chairs for tiny people. 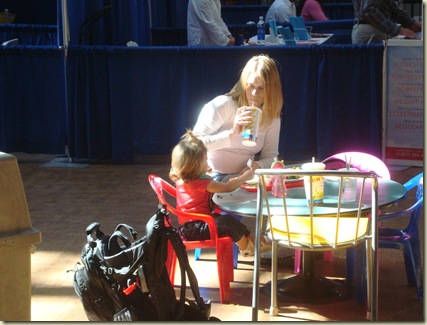 We traveled by backpack, by monorail, and by Duck Boat. 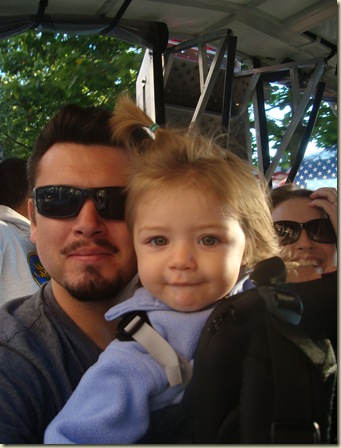 We went to the aquarium: 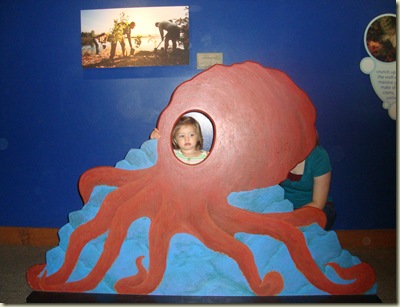 And to the Children’s Museum, where painting happened: 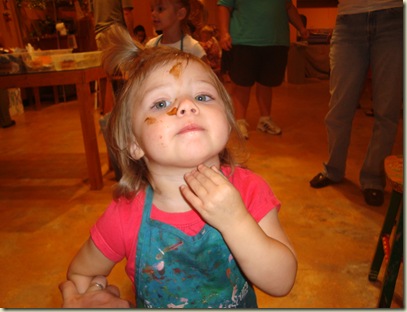 And to a video arcade with its own carousel: 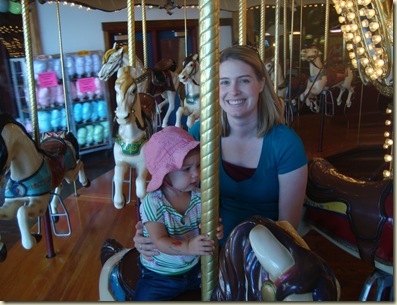 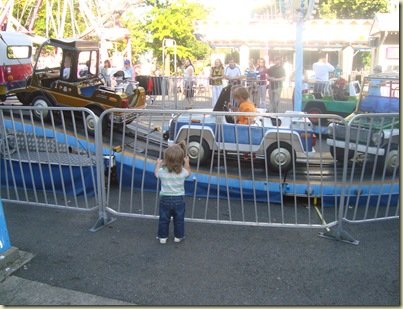 ….where Erin joined an old busker’s act and tried to steal his stuffed lion: 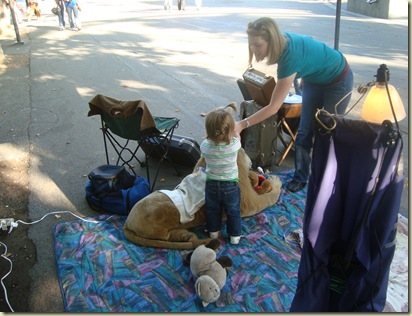 At the end of the trip my back was sore, and we were exhausted, but in a very happy way. We saw a lot of the touristy parts of the city, all without a car or taking a taxi anywhere. Dreading the trip home, scheduled as it was for a nap time that might never happen, we returned to SeaTac not knowing if the trip was going to be capped by a massive spaz-out on the flight home. We were pleasantly surprised by the huge playroom at the airport: Seattle is not populated by dummies. If you want a kid to sleep on an airplane you need to tire her out first. 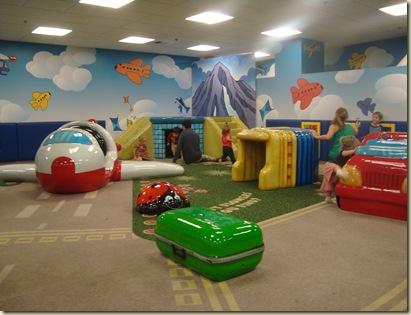 Wouldn’t you know it? Erin slept for nearly the entire flight home. She whispered “happy” as she lay in Emily’s arms, and then I took her and sang a made up song as we took off, and by the time the seat belt light was turned off she was asleep.

It was after we arrived home that night, tired and relaxed, that we opened a bottle of wine to cap our long weekend together before Emily went back to work for the week and I prepared to return to school full-time, my days of being an at-home dad behind me. It was a bittersweet evening, as I realized my time with Erin was going to be severely reduced. I had known nothing but fatherhood for a year, and I was nervous about going back to school, and about putting Erin in daycare.

After I poured the wine Emily looked over at me as I sat pondering the changes the future was going to bring. “You know, it’s been a while since my last period,” she commented.

“Maybe you’re pregnant,” I joked back, thinking about class schedules and students and daycare teachers who were going to screw it all up. 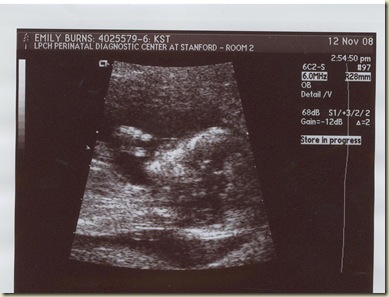 Bittersweet indeed. We had enjoyed our free-wheeling trip to Seattle so much, just we three, that it was a bit of a shock to be faced with the reality of a second child, a sibling, when all we’d known was life with Erin.

I drank Emily’s wine and life went on.