We’ve been dealing with off-and-on labour pains for a week. Emily’s had a hard time sleeping, we’ve passed our official due date with no sign of my son. I was certain he would show up during Game 7 of the Detroit-Anaheim series because the universe (in the tradition of things which commit actions being described by those actions, like one who commits felonies being called a felon) is an iron.

I am very aware that “ironic” is not something that can properly describe events in the world, but only events a writer conjures up for the purposes of literary effect. Nonetheless, had my son showed up during the Game I’d have yelled along with Alannis that things merely badly timed or predictably perverse were IRONIC. And I’d have punched you in the neck if you’d offered, during my expression, that I was using “irony” incorrectly. You would have felt awesome. (See that one? That one is ironic. You wouldn’t really have felt awesome and I was not intending that you should think you really would have felt awesome. You know that I meant “awesome” ironically. And that’s the key. Irony is participatory.)

In preparation for my son’s arrival we moved Erin out of our bedroom, into the spare bedroom filled with books for big people and a desk for big people and the cat, the poor, fat, diabetic, scared-y cat. So long as Erin spent most of her time out of that room he was content to just hid in the chest his litter box sits in (it’s a pretty cool custom wooden chest with a lid on hinges and a hole cut in the side that looks like furniture and traps a lot of the smell), and being worried about him ever getting used to Erin we figured just tossing them in a room together would allow him to get more used to her and eventually not care so much that she squeals when she sees him and tries to pet him like a pugilist pets his opponent. (Another use of irony.)

It has actually worked, to some degree. Our fat, diabetic, scared-y cat has ventured out of that room with more and more frequency, and he isn’t afraid to eat even when Erin is in her crib and staring at him.

But sometimes, in the dark as she falls asleep, she’ll hear him eating and wake up. And she’ll cry for daddy then explain her distress: “Kitty eating; kitty eating, daddy. Dat not scare you. Kitty hiding inna box; kitty hiding. It’s okay. It’s okay daddy.” And I’ll hold her a little, and explain that the kitty is just eating (which she knows) and that she is safe (which she knows) and that it’s time to sleep (which she also knows).

Even worse, though, is when he cries. He doesn’t cry because he’s afraid of Erin and her breathing in the dark, but because he’s about to vomit or shit a river all over the fucking carpet. He woke Erin up at 5:30 this morning with his wailing and gnashing of teeth and taking of craps on the carpet outside his litter box. He also dropped a nice one in his litter box, but he’s a decade old and still has no idea that the purpose of scratching is to cover the shit. Being an imbecile he just scratches the wall and hopes things will all work out. His scratching, crying, crapping, and vomiting at 5:30 in the morning were not well received. But this is life with a diabetic scared-y cat.

I suspect he was just after a little vengeance, tormenting the child who wants to pull his ears and who yells “No hitting kitty!” when he finally swipes at her after being cornered and getting his forehead awkwardly, but firmly, stroked.

But he is a cat with no concept of causation, so he scratches at walls instead of covering his shit, and this plan for revenge only means that I get to clean the carpets. Sure, Erin’s sleep is a little disturbed, and her mom wakes up and entertains her in the early morning by baking muffins (nesting, folks, means muffins out of nowhere), but the real victim of his vengeance is me.

I walked out to the living room in the morning to discover this lovely sight: 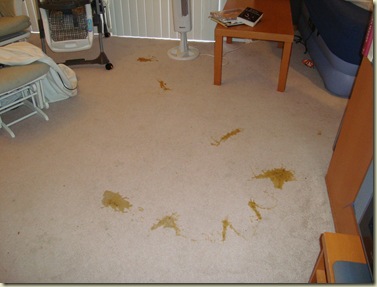 Those are all puddles of projectile vomit. The shit was in the bedroom, and somewhat contained. But he fired off bile into the pile like he was a gunner in a turret charged with mowing down Nazi infantrymen.

As I was drawn into the living room by the smell of fortunately fresh muffins and unfortunately fresh puke I caught Emily’s eye. “We’re getting a carpet cleaner,” she announced, lips in a firm, tight line. “Get this one.” 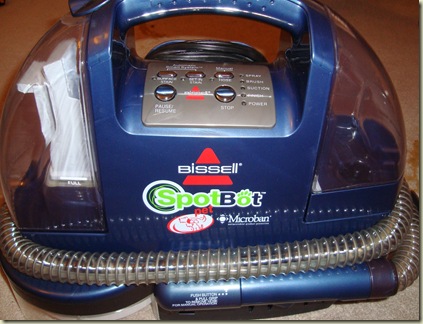 That’s the Bissell “SpotBot” with blah blah blah and blah blah blah. You set it down on a spot and then go away. (It is not cordless. This picture is just a far shot and not an action shot. You have to plug it in. Which is fine with me because we also have a battery-operated Bissell that doesn’t last long enough to clean anything worthwhile in a house with a diabetic cat, so I’m done with cordless.) 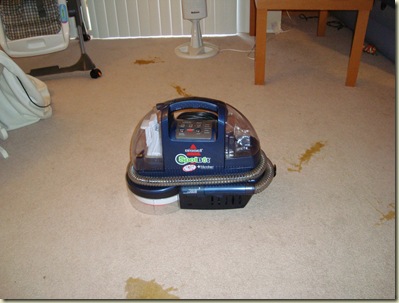 Or, if you’re a real gamer you can use the hose and nozzle thing to clean the spot yourself. Unfortunately unless your spot is less than about 8 inches in diameter you probably won’t get much use out of the automatic cleaning feature. For instance, if your cat projectile vomits in a stream 10 inches long you are going to be stuck using the hose. 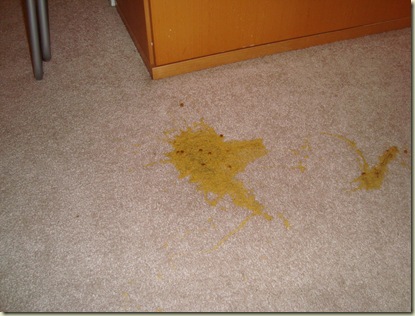 However, the results using either the automatic or manual settings are pretty decent. Better than I get by just sitting there scrubbing or blotting. 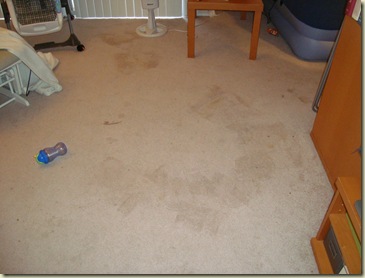 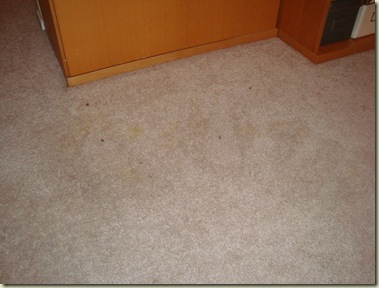 Once again, Emily’s nesting takes the form of baking, and mine takes the form of dealing with bodily fluids and waste. Seems fair to me. (Hey, look, another use of irony as a literary device. Because it does not in fact seem fair to me. However, I don’t have to gestate, contract, push, scream, or enslave my nipples to a little organism that will slowly develop teeth. So maybe it really is a fair trade. Or, I suppose, it probably remains an unfair trade but unfair from Emily’s perspective now and I’m no longer certain if I’ve actually used irony.)

(In the interests of full disclosure I should admit that I have never been approached by Bissell to review their product, been sent any product by Bissell or anyone representing Bissell, or been paid or compensated to write this mini-review. In fact, if Bissell had contacted me to do a review in exchange for a cleaner or money or something I’d have probably declined. If, however, Bissell wants to compensate me in some way NOW for the lovely things I’ve said about their product, well, I wouldn’t immediately tell them to fuck off. I could use some of the cleaning solution now, since I used basically an entire bottle of it to clean all of the vomit and shit my cat vengefully left all over my apartment.)

Still no baby. But we’re having labour induced at 9am tomorrow (Saturday May 16th). Hopefully my son will be born and I’ll have pictures by Sunday. Also, hopefully, the pictures will be less disgusting than shots of chunky cat vomit.