Use it in every day conversation: “So, I was walking in the house the other day and then I totally Grandpa Banjo’d my toe on the table leg.”

I’d like to state that my father, for some reason, has decided that he’s going to Old Man-ify himself. It started with the hat, a wool cap he bought in Ireland on our trip in 2006. At the same time he adopted a walking stick, a shillelagh from Tipperary. Then he added the glasses, which I’m pretty convinced he doesn’t need. He put on a vest the other day and I almost buried him. But now the banjo…what the hell? They’re all affectations. He’s not that old. Although he is shrinking and I have to crouch a little when we take pictures together so I don’t tower over his frail elderly frame. 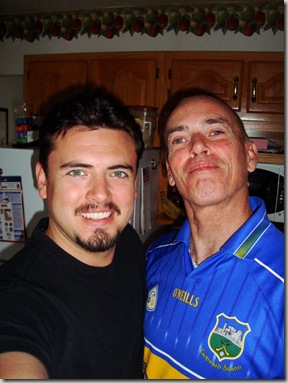 In the comments below please suggest what my dad can do next to Old Man-ify himself. I’ll pass the suggestions along. Maybe next time I see him he’ll have started knitting or something.