Monday and Tuesday were my first days as a Stay At Home Dad (The Sequel). Emily is back to work now, and the kids are only in daycare three days each week, and suddenly, as many have been before, I am left to my own parenting devices. This time around, though, it’s not as easy as just tossing a kid into a backpack and going to fun places, or getting chores done while the kid sleeps.

Let’s see. Monday I packed the kids up and drove to the San Francisco Zoo in the rain. The clouds parted, I tossed Adrian in the backpack, 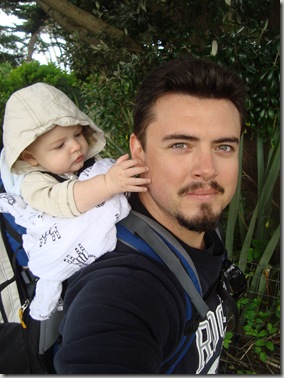 and Erin led the way into the zoo and the family farm area where, because it was raining earlier, she had the entire place to herself (apart from) some scary, WE-CAN-READ-YOUR-THOUGHTS, sheep. 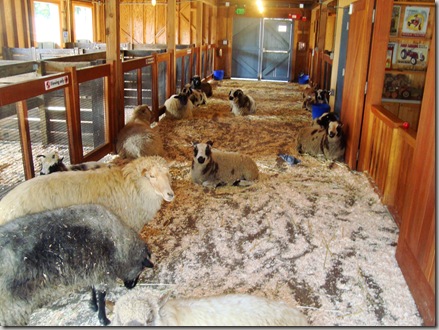 Eventually the rain returned and an impending nap time forced us out of the zoo, so we packed up and went home for a couple of hours. A fun time was had nonetheless.

After naps (for everyone) it was time for swimming lessons for both kids. How can a dad alone change two kids and himself in a changing room in time to go to lessons? How can a dad swim with his infant son while his toddler daughter takes her small group lesson when she has a tendency to just launch herself into open water and dad is usually sitting within arm’s reach to drag her up? I wasn’t really worried, but I’m hardly ever worried. Even when I don’t know what I’m doing I act like I do. Also, Erin and I talked a lot about how she has to sit on the step in the pool when her teacher is with another kid. We talked so much about it that I kind of hesitate to move from any steps I’m occupying myself. We talked so much about it that Erin didn’t budge from her step at all that day unless her teacher called to her for her turn. I was utterly proud of her, and of us, for executing what was probably the smoothest lesson/change maneuver we’ve ever done, and we did it all with Adrian further complicating the picture.

(The trick is to get a towel on her, dry him off and change him, then buckle him in his carseat while drying her off, and then, if your prayer for a miracle is granted she will sit still long enough for you to get dried and changed yourself and then you can emerge from the locker room as if it is the easiest thing in the world to do, prompting one of your mom friends to say “I don’t know how you can do this with two!” A brief swell of pride, and a quick switch to “˜casual dismissal mode’ will allow you to say “Ah, this is nothing. You should have seen me take them both to the zoo earlier today.” And scene.)

Tuesday I got both kids out of the house with me by 9am, started a laundry cycle at the laundromat with both of them in tow, drove down to a different city to drop off some boxes, returned to the laundromat to move the clothes to the dryers, took the kids out to a late breakfast (or, in Erin’s case, second breakfast), then returned to the laundromat to fold the clothes while the infant fell asleep in his stroller and the toddler rearranged the laundry baskets. This all worked because I thought very hard about the timing of it all before I began the maneuvers (I say “maneuver” a lot, because sometimes you just have to be a bit of a tactician when you have the kids), and it could have failed, fantastically, if I’d been off by even ten or twenty minutes. As it was we never let our laundry just sit in a machine, and we returned home in time for lunch, some play time, and a nap before I started dinner.

That…was Tuesday. (Not as full as Monday, but not exactly sitting around eating bonbons either.)

Wednesday was a school day for all of us. The kids went to daycare and I tried to get some work done around the gym and co-oping. I did okay. I’m a better SAHD than student at this point, though.

Thursday was a day for feeling like crap, so I did.

Friday was a day for getting over myself and getting some work done, so I did, though again, without the kids my motivation to get things done is severely diminished.

Saturday was a family outing to the Children’s Discovery Museum in San Jose. Erin explored; Adrian hung out in the backpack looking around at things. 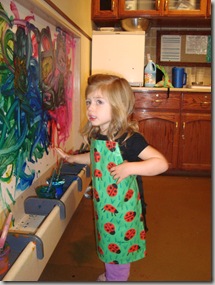 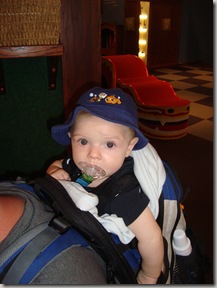 During naptime I did some work at a house we’re trying to move into before the kids are in high school (and where I’d dropped the boxes during laundry time on Tuesday). I sold an oven to a guy off of Craigslist (after also completing flooring and water heater sales earlier in the week with people who did not, in fact, chop me up into little pieces and who paid in cash), and then tore out some closet doors and a little framing so that our new floors can extend into those closets smoothly instead of being broken up by a door frame. It will look sweet. If we ever live there. Which…well, there’s a very long story I’m not prepared to share just yet. I’ll keep it as a mystery.

Saturday night was Everybody Get a Little Sick night. So we did.

Sunday was Pumpkin Patch Day and we’d been promising Erin that she could wear her costume at the Pumpkin Patch all week long and we’d already planned to meet up with three other families in a sea of rotting squash and flu season snot. So we went….

And whose kids are cuter than these two? 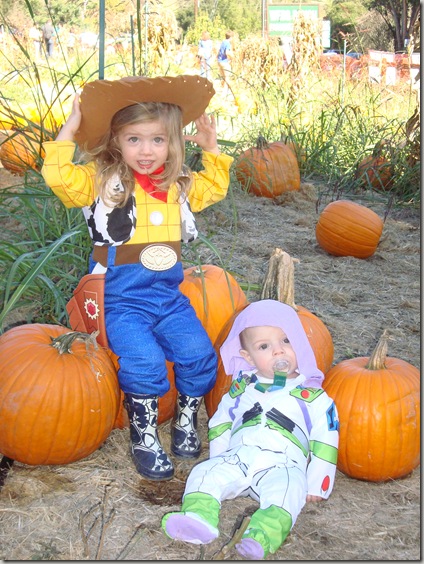 Erin’s been talking about her Woody costume for nearly two weeks now. We made the mistake of letting her wear it on a couple of different nights and of course she snapped a piece of the lacing wrapping the brim of her cowboy hat. So, I dug around for some kind of tape or glue or something and despite having a junk drawer that is so full of crap that I can barely get it open we only have packing tape in the house.

So, there’s packing tape holding that hat together. But you can’t tell just by looking unless someone points in out to you. Hey, look over there!

See you next week. And Happy Halloween! 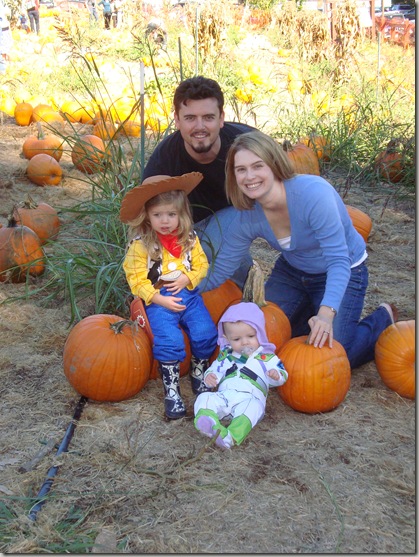