Recently, Parents magazine ran a piece by Linda DiProperzio called “Babyproofing for your Crawling Child.” It’s most likely about child safety, because babies like to drop things that are sharp or heavy on things that are not. But for all I know it’s a total mislead of a title and the piece is really about where to get cheap airfare online. Who knows? Not me. I don’t read parenting magazines, either online or in print.

However, it struck me that I have a certain amount of wisdom with respect to babyproofing that I can pass on. I have a crawling baby; I have experience; I have five minutes to spare; and I have access to MS Paint.

My general babyproofing philosophy is: “Don’t let the baby leave a 5’x5′ area, ever.” Babies don’t need to be mobile. They don’t need to see out of windows or check out what you are doing in the kitchen. Keep that baby segregated from everything interesting!

Ah, but there’s the real problem, isn’t it? Babies, crawling babies, keep trying to leave their areas. So what’s a dad to do when his baby starts crawling? 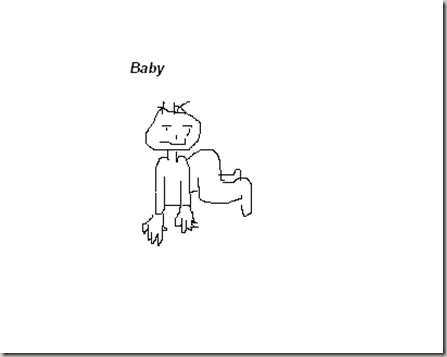 Well, the first option is probably the cheapest. Find a hitching post (they’re everywhere if your neighbourhood is Old Westy enough)…. 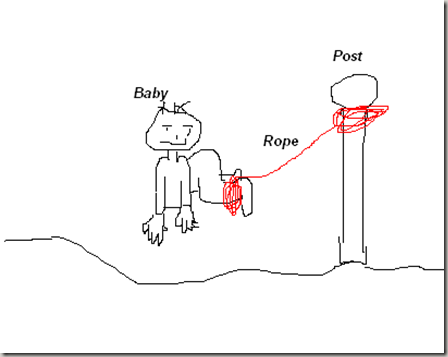 Please don’t tie the rope anywhere near the baby’s head or neck. That’s not cool. Here I have depicted the baby secured using the leg; the arm is also an option, but I think that looks ridiculous.

The second option is a little pricier, but it’s worth it if you live in one of those Futuretowns that has replaced all of the hitching posts with laundromats or telephone booths. 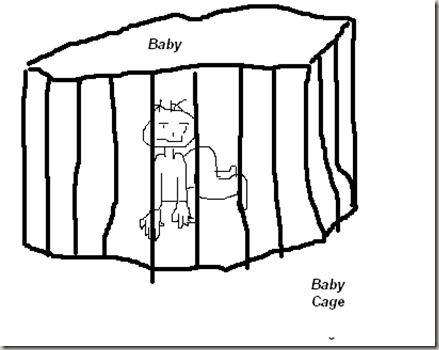 As you can see, the baby is securely contained inside the baby cage. Unless your baby is a tunneler, he’s not going anywhere. But just in case, how about you don’t give your baby any spoons? Also a good idea anyway, since I hear that after you’ve spent time “on the inside” you get pretty good at sharpening spoons into shivs. Don’t get shiv’d, dad. Or is it shanked? Shank’d? Whatever. Don’t let your little baby felon treat you like the prison snitch.

“But Backpacking Dad,” you say, “my baby is very precocious. I worry about the open space at the top of the baby cage. What if my baby figures out how to Jackie Chan his way up the corner of the cage and does a sweet forward flip onto the floor? He could be in the good china within four minutes. I’m saving that china for when the governor visits. Or Lady Gaga. What am I supposed to do?”

Well friends, there is an accessory to the baby cage that is available. But I warn you: It’s a little like getting the undersealant at the carwash: it’s there, and it’ll make you feel like you tried everything you could if your udercarriage eventually rusts out, but most people are never going to see any benefit from it so they shouldn’t shell out the extra cash for an almost 100% pure profit upsell. Anyway, the accessory? 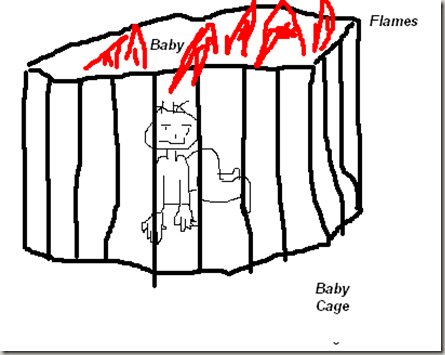 Sure, the flames add peace of mind. But at the end of the day you could have spent that money on coke and hookers.

Suppose you live in the San Francisco Bay Area, and you have one of those San Francisco Bay Area babies who can already text ironically about how his parents have ruined the environment and are now overcompensating by investing all of their extra money in whatever putrid bulb a hippie farmer sticks an “Organic” label on? That kid is connected. He has friends who can be reached on their iPhones to enact a rope cutting or bar bending (there’s an app for that), facilitating the tyke’s escape from his 5’x5′ area.

Luckily, entrepreneurs are way ahead of even those babies. What, they wondered, will stop anything  even remotely San Francisco-ish from moving out of a small, confined space for long periods of time? 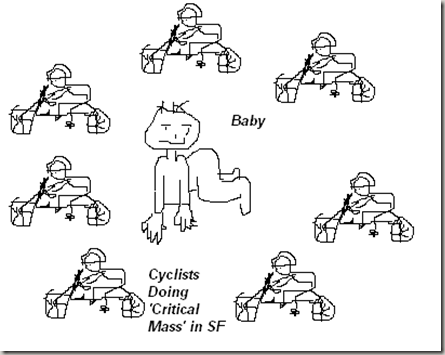 No baby is going to be able to move an inch as long as Critical Mass is happening. The baby can try to turn all the traffic lights red if he wants, but nobody cares: the cyclists are just going to keep on pedaling (especially the hipsters on their “˜fixies” since I think if they stop pedaling they explode). That baby is not going anywhere.

But, at the end of the day, most parents in non-Old-Westy areas probably don’t have the extra scratch just lying around to invest in cages or a large group of cyclists who don’t give a crap.

Well, there’s always the old stand-by. Television is your friend here. Especially if it’s a nice, big flat screen that you desperately want to keep as clean as possible to watch hockey or things that are not hockey but which might involve vampires who don’t sparkle. Put the baby in a room with that tv and he will gladly spend his day slapping finger and hand prints all over the screen, making it completely unwatchable. 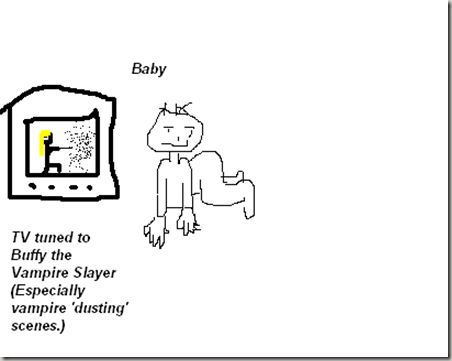 In order to be more certain that the baby won’t lose interest in finger-painting all over the screen, be sure to leave something either colourful or sticky (preferably both) within the baby’s reach.

We here at Backpacking Dad want what’s best for your baby. So please, do the right thing and babyproof your home.