Our jaunts wend north, north being the direction of the Golden Gate Bridge. But south has its own joys.

South of San Jose, more, south of Monterey, California dips a rocky finger into the ocean. Take a right off Highway 1 and you have arrived at Point Lobos. The park combines rocky hills, forested trails, cliff views, secluded beaches, wildlife preserves, panoramic ocean views, and California history into a single experience. Its adoring fans bill it as “the crown jewel of the State Park system” and it is difficult to indict them for hyperbole.

As is the case with other state parks, parking within the grounds costs. Having neglected both cash and checkbook (the ranger would have taken either) I was forced to park out of the preserve, on the side of Highway 1, a little down the way. It wasn’t much of an inconvenience, excepting the traffic going by that needed to be avoided during a crossing, and once on the correct side of the highway there was a trail leading into the park that afforded protection from the sight, if not the noise, of the highway.

With Adrian safely in the backpack and Erin taking point, we entered the park. A donation is asked via signage on a box next to the park map, but there are no mandatory entrance fees or day use permits needed, so at $0 expended for parking or permits it is the least expensive State Park we’ve explored.

Below, a map of Point Lobos, with our route marked in red with sloppy arrows indicating our counter-clockwise direction. 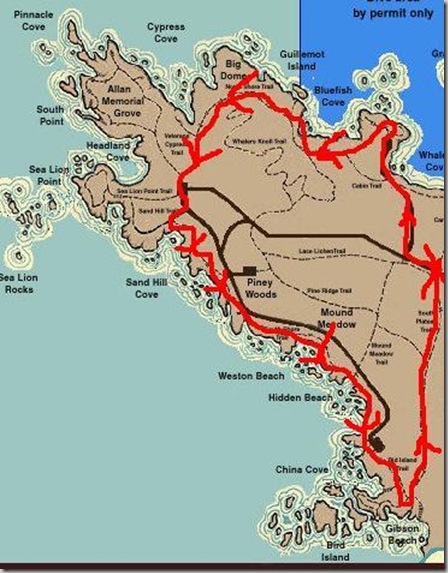 We began at the center-right (the eastern-most point on the map) and wound our way a little west, and a little north, toward Whaler’s Cove along a road. A trail was in the offing, but it wasn’t clear to me at the time that the trail would go where I wished it to go, so I opted for the drive-in road. (Note for future hikers: the trail does go where you’d expect it to go, so avoid the road and its infrequent-yet-inconvenient cars forcing you and your pre-schooler to the side of the road.) 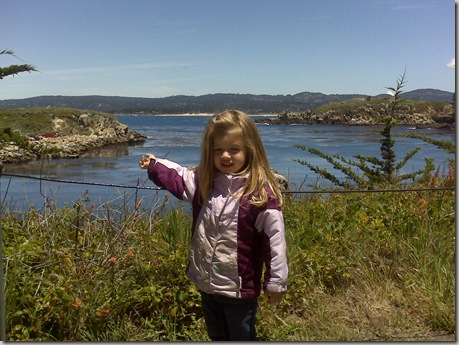 Whaler’s Cove is really beautiful, yet I lack a photographer’s patience with scenery else I’d cast picture after picture at your eyes; I prefer pictures with my children in them. But you are assured a flat approach to a small parking area walled by short cliffs. I don’t know what it is about cliffs above water that always attract my eye, but despite the modest elevation Whaler’s Cove was no different. 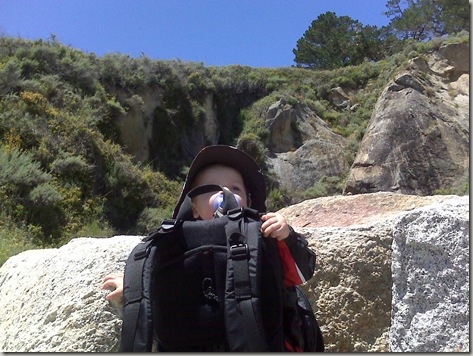 Whaler’s Cove is home to a small museum offering access to California’s whaling past through skeletons, art, writings, artifacts, and a video playing in the tiny cabin. A brief archeological excavation beneath the floorboards of the cabin is preserved under glass, bearing witness to the multivalent past in bones and pottery shards.

Whaler’s Cove permits scuba diving, and this tradition must be a fairly old one considering the ancient deep-sea diving suit on display in the museum that prompted Erin to shout “It’s like Scooby-Doo!!!” upon viewing.

From sea-level at Whaler’s Cove the hiker, the pre-schooler, and the backpacked crawler may proceed up the stone steps carved into the rock to reach Whaler’s Knoll, the beginning of the trail that will circumnavigate the Point. 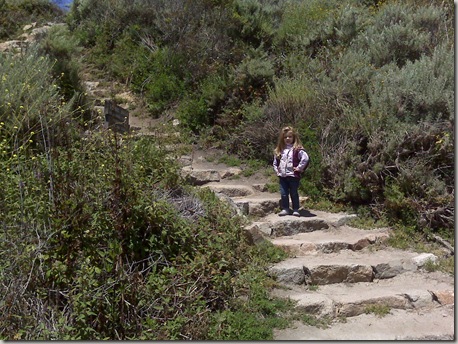 Once at Whaler’s Knoll, you are advised to pose for Teen Wolf Too photos with the Cove as a backdrop. 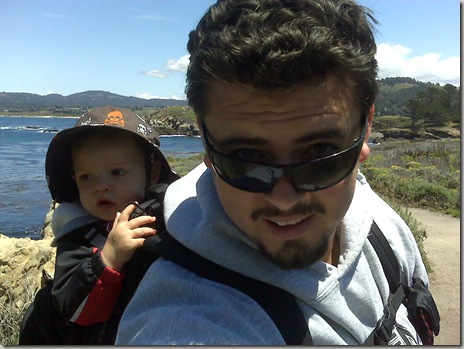 Or, if you are a dancer, elect to be pictured post-pirouette in front of Bluefish Cove on the northwest side. 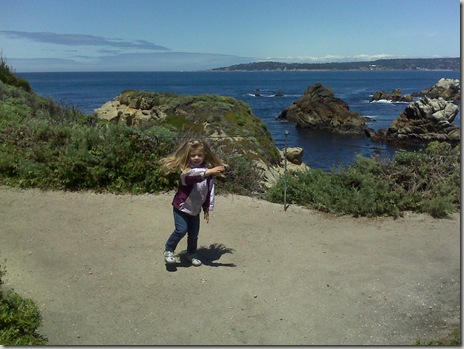 The preserve houses diverse wildlife, but on the north side expect reclusive deer who flee from exuberant children. 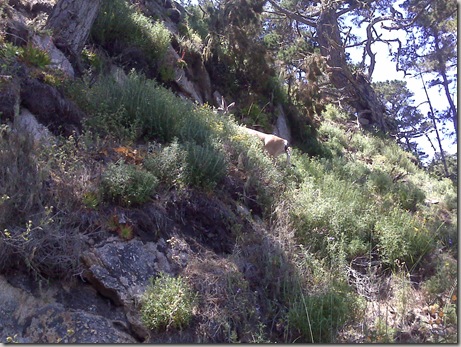 As the trail winds its way around Big Dome and Cypress Cove it remains relatively flat, with occasional exceptions, but the risk of encountering poison oak remains constant: be vigilant. Or hide on rocks. 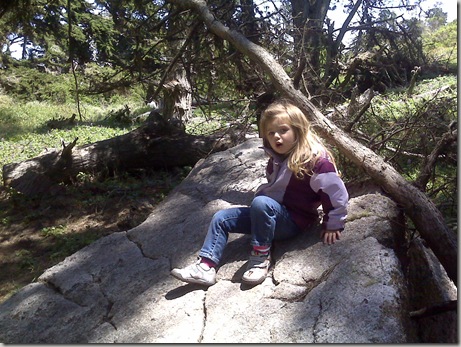 The view from the northwestern edge of the point is fantastic, but after you’ve encircled Point Lobos you realize that there is always a better view. Especially if the child in the picture you are taking doesn’t look like she is mining for gold. (Note to child: I believe gold was a Northern California discovery; not the Central Coast; and certainly not your nostril.) 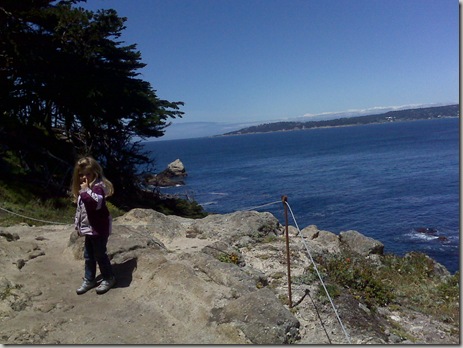 Completing the east-to-west leg of the journey around Point Lobos finds you at a small parking lot and station whence issues docent-tours of the west and south shorelines. To the west and slight north is Sea Lion Cove, which promises sea lions. But you needn’t venture so far out of the loop to see aquatic mammals. South and west, in Sand Hill Cove, the sea lions rest on a small island and the otters do back floats in the kelp beds. 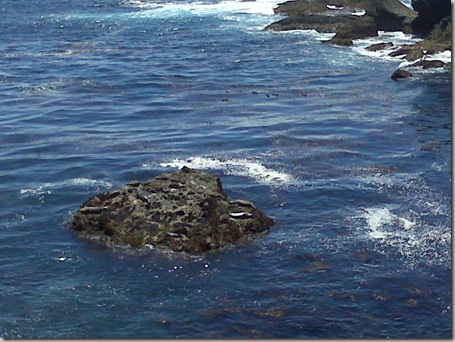 The walk along the southern shoreline is even more a feast for the eyes (and nose) than the north: the ocean invades, and extends to blue infinity. 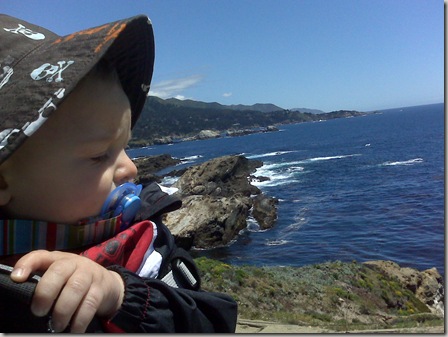 Passing beach after beach and cove after cove we found ourselves ascending an unexpected hill, up to a ridge overhearing Highway 1 again. From high above the coves and beaches took on even more secluded looks. 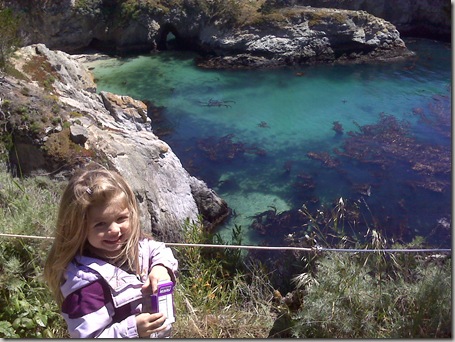 If not for the staircases placed by a considerate State you could believe no one had ever set foot down below. 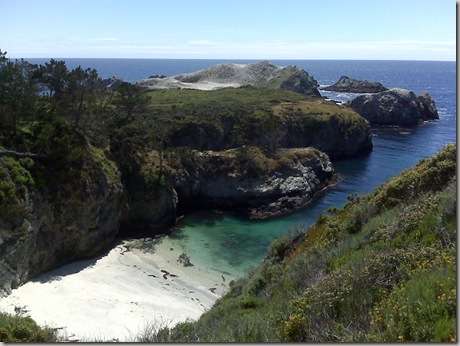 Beyond a low branch a choice needs to be made: left, to the park entrance a mile and a half off, or right, to more views. Erin, as ever, chose acrobatics.

And I, noting the time, elected the return trip to the entrance, along the South Plateau trail.

It really is difficult to charge the fans of Point Lobos with hyperbole. It is beautiful there. And at something between four and six miles for a thorough circuit, with few hills to climb up or down, it is a perfect day hike for a dad and his kids, even if it does take an hour and a half to drive there from the Peninsula.

5 thoughts on “Erin and Adrian Go to Point Lobos”