As one may have gathered from my previous post, Adrian and I are in Canada. More specifically we’re in Eastern Ontario. Even more specifically still we’re just outside of Kingston Ontario, home of the Frontenacs, KCVI, the birthplace of hockey, Fort Henry, and my dad.

You can check out my Twitter stream for in-the-moment thoughts about our flight to Toronto, but overall it was nice. Except that Adrian didn’t fall asleep until his bed time had been missed by two and a half hours, and when he did sleep it was only for two hours, which means that when I slept it was for less than two hours. On our flight to Toronto from San Francisco we had a short layover in Los Angeles, at which point we switched seats and seatmates. Our previous seatmate was a young woman completely in love with Adrian, and she’d caught the eye of the young man across the aisle from her, who kept using high-fiving Adrian as an excuse to lean over the young woman. Our new seat mate was also a young woman, also in love with Adrian, and thank God for that because he didn’t sleep very well and could have been a miserable traveling companion for someone who doesn’t like kids. She also had a small dog in her carry-on, and Adrian loved him. (As a side note, I found out she was returning from LA after her work visa expired, having gone out there with an acting manager’s sponsorship after being an actress on Degrassi. Degrassi! I totally met someone from Degrassi! And even though I haven’t seen Degrassi since those kids were in junior high it was just a perfectly Canadian thing to have happen to us as we were flying in.)

By four in the morning, as California measures time, we were both exhausted and more than ready to de-plane and hit the road in Ontario.

However, de-planing was less simple than I’d imagined. We had managed to score empty middle seats on each leg of our trip, which meant that I did not have to hold Adrian on my lap for four hours straight while trying to get him to sleep. Instead I debated between using the CARES harness we have to secure him to the lap belt in the middle seat, or using the big Britax car seat we were bringing anyway for the rental car. The downside of the CARES harness was that he might slide under and he might not be comfortable enough to sleep; the downside to the car seat was that it was big and a pain in the ass to buckle and unbuckle. I decided to try his car seat out, since I was lugging it round the airport anyway, preferring to gate-check it rather than check it with the main luggage for a $25 fee.

In the end he didn’t get much more sleep in the car seat than he would have in an uncomfortably large airplane seat with the CARES harness. And I mangled my arm so badly trying to unbuckle an airplane lap belt with one hand and no leverage as it sat behind a huge carseat that I don’t think I even can attempt it again. My arm looks like hamburger meat.

One advantage to being Backpacking Dad is that I get a one and sometimes two-hand advantage over people using strollers. Carrying Adrian through the airport in the backpack meant my hands were free to carry the car seat and the luggage. I don’t think I could have managed this trip alone if it weren’t for the backpack, which also served as my carry-on luggage, holding snacks, drinks, my laptop, medications, diapers, wipes, and all of our travel documents. We made swift progress through customs and immigration and then out to the rental car shuttle stand.

We rented a car with a major rental car company, through Expedia, and here’s a little nugget for you from the Internet Deals file: nobody cares if you have a legitimate reason to be using a particular rate code. I found a fantastic discount code for our rental car company online and no one at the counter even blinked at my reservation. Whatever the code says, goes. Also, here’s another travel tip: always reserve an “intermediate” vehicle. They’re a little more expensive to book (unless you are using the super-awesome rate code), but the odds of the company being out of those vehicles are very good. Adrian and I are now cruising around in premium car because the car rental company oversold its intermediate vehicles.

After getting our car we began our drive out of Toronto toward Kingston, and Adrian finally did what he wouldn’t do on the plane: sack out. 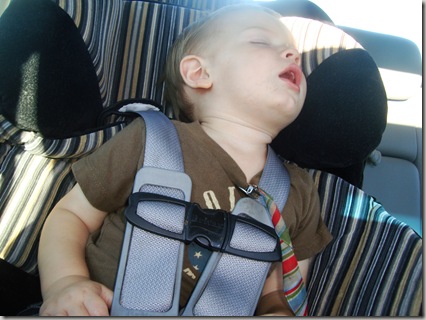 We drove for about an hour, systems completely messed up from lack of sleep and without any concept of time. Then we stopped for breakfast in a little town between Toronto and Kingston and guess who showed up at our diner?

Her Bad Mother and Amy Urquhart! How random! This is what happens when you go to Canada though; everyone knows everyone and they all eat at the same diner. Amy brought her baby Nate (not quite a baby anymore, alas…) and Adrian tried to kill them all with hurled utensils. 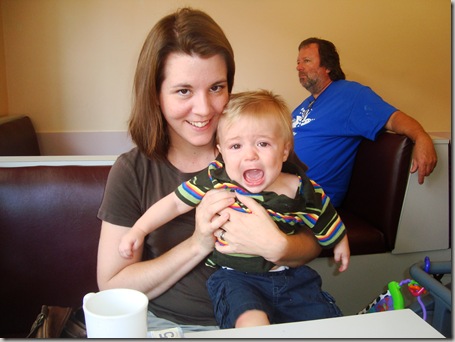 Luckily, I’d brought some of the peach jam I’d made during #HomeHer10 just in case I ran into any Canadian bloggers at diners in small towns between Toronto and Kingston. So I didn’t come to town empty-handed. 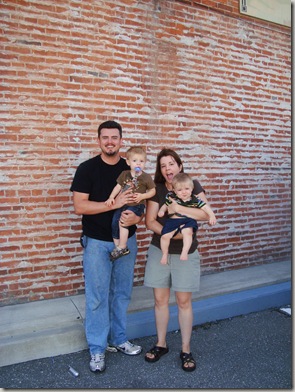 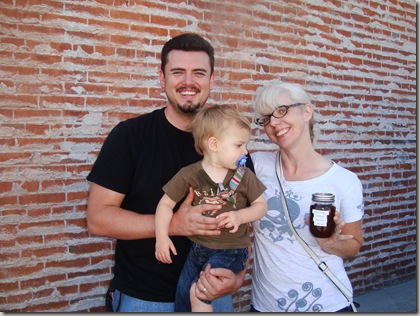 Adrian and I hit the road again and we decided to take the old Loyalist Parkway down through the Tyendenaga Mohawk Territory on the way to Kingston. Walking into a store there to buy a drink and hearing a woman telling her son to go say “hi” to tota floored me for a second. I never hear “tota” except when I say it about Adrian’s grandmother or when I’m in Akwesasne visiting my family. Suddenly the Mohawk community was a lot bigger than it had ever seemed to me when I was a kid, or even for most of my adult life. I knew, intellectually, that there were Mohawk reserves outside of Akwesasne, but I’d never visited one and seen how just like my own rez they were.

We finally arrived at my father’s house a little after noon. My father has two little girls now who are ten and three, so Adrian didn’t get to be an only child on this trip for very long. There was guitar-playing, dog-avoiding, toddler-bothering, toy-sharing, grass-running, and eating-food-at-weird-times-ing. 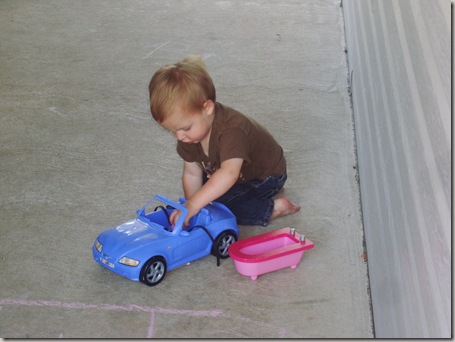 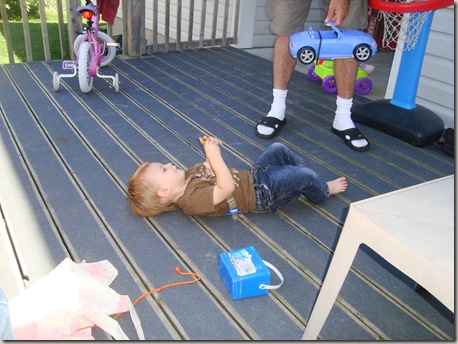 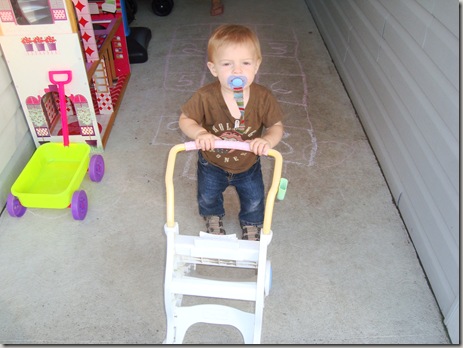 I started this post late in the afternoon and was falling asleep as I was typing. I would wake up to a string of “kkkkkkkkkkkkkkkkkkkkkkkkkkkkkkkkk” or “fffffffffffffffffffffffff” as I had drifted off with my fingers on the keyboard. I also ended up typing several sentences from within a dream. When I re-read them this morning I laughed my head off because they were so clearly recountings of imagined events. Adrian and I passed out together last night and managed to stay in bed all night, if not asleep the whole time.

And so ended the first day of Backpacking Dad Goes to Canada TripTravaganza!

2 thoughts on “Backpacking Dad Goes to Canada TripTravaganza! Part One”