Adrian and I left Kingston late on Wednesday afternoon. First we stopped at Lake Ontario Park where I met a friend from high school and made her sign my yearbook.

Adrian had a chance to run around the park a bit while we talked about people I remember, vaguely, others I remember vividly, and how they were doing. The older I get, the more people I know who have died. I’m not that old and already there’s a list.

We left Kingston just before dinner time and I made a Harvey’s run. Harvey’s, for the uninitiated, is a Canadian burger chain and it kicks In “˜n’ Out’s ass up and down the street. Harvey’s also serves up poutine, and I made most of my culinary decisions on the Triptravaganza based on whether or not poutine was available.

The drive from Kingston to Cornwall was green. Most of the 401 between Toronto and Cornwall is green. Having done most of my long-distance driving in California for the last decade the green is a welcome change from all the brown of the Central Valley. The green also camouflages all of the little towns along the St. Lawrence River.

Cornwall sits on the St. Lawrence River south of Ottawa, up river from Montreal. Across the river is Akwesasne, the Mohawk Indian reservation where my mother’s family lives. The reservation consists of Cornwall Island, connected to Ontario and New York State by two suspension bridges, Hogansburg New York, and two peninsulas into Quebec, Saint Regis and Snye, that are only accessible by land from New York. 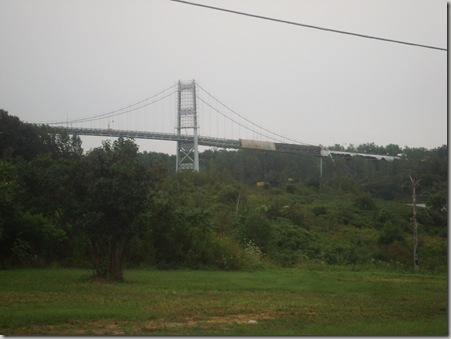 We were staying with my sister in Saint Regis, but since she is the editor of the local paper and Wednesday night is a printing night she was working fairly late.

I decided to look up a friend from grade school and university who moved back to Cornwall to raise her family. We met at a Tim Horton’s (where else would you go, Canada?) at the foot of the bridge to Cornwall Island and got caught up. She mocked me for having lost my Canadian accent when I let an “about” slip.

Thankfully I didn’t have to add anyone else to the list of people I knew who are dead. A surprising number of people from those pre-high school years had stayed or come back to Cornwall. It has never seriously occurred to me to move back to that area, but my experience was probably very different than theirs.

They hadn’t lived on the rez.

I’ve always been conflicted about the rez. When I was very young, and we would visit, it was just normal. That was where my extended family lived, where my grandfather lived, where my mother had grown up and where my father had met her. Later, when we moved to the rez after living on army bases and in small Canadian towns for years, I hated the rez. I couldn’t relate to the people; even my extended family seemed a little alien. It was during that period that I went to school off the reservation, in Cornwall, and that was only possible because I spoke French and the Band Council was convinced that I needed to be able to continue to receive schooling that wasn’t available on the reservation itself. I never went to school with other Mohawk kids; I made friends very sparingly with anyone on the reservation, and the friends I did make were an outlet for my more destructive tendencies. My friends were mostly kids from Cornwall who lived what seemed to me to be nice small town lives. After we moved away from the rez and I started high school in Kingston the rez seemed like something I had escaped, and I carried that attitude around with me for a long time. It’s only recently, maybe now that I have kids, that I feel some comfort in going back. It’s not a lot of comfort, but there’s something there.

Unfortunately, my house is not. We abandoned a house on Cornwall Island twenty years ago. It was already falling apart when we lived there, but after we left it had to be bulldozed. Now, the forest that used to be behind the house has reclaimed it entirely. 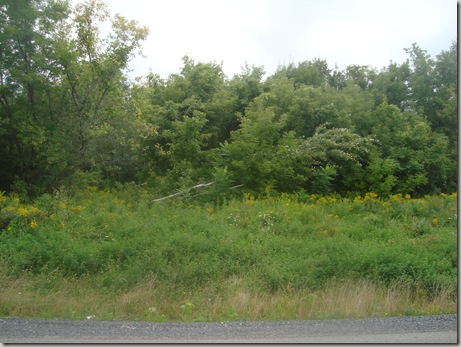 But even though the house is gone the rez is still there, so I don’t think the woodland victory bothers me as much as it would if all I’d had was a house connecting me to the area.

When we finally arrived at my sister’s apartment Adrian had a second chance at the Making-friends-with-dogs game (he’d failed once already with my father’s dog, who likes to sneak up on small kids and bark at them to make them jump). 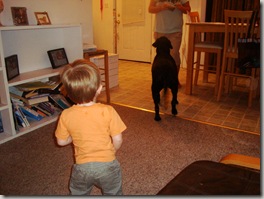 My sister has a big black Labrador retriever named Jenny, who was the most hyper, disobedient dog in the world when she was younger. I was a little nervous about staying there knowing Jenny was so hyper, and seeing how Adrian had responded to my father’s kid-tormentor, but she has mellowed so much as she’s grown up that she was a perfect companion for even a small toddler. After some initial nervousness Adrian fell in love. He grew so comfortable that he even got up close to my mother’s dog. 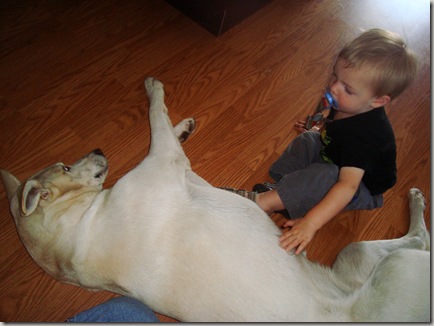 My sister and I spent our time playing Nintendo Wii and driving around the rez so I could eat poutine and take pictures of Adrian. 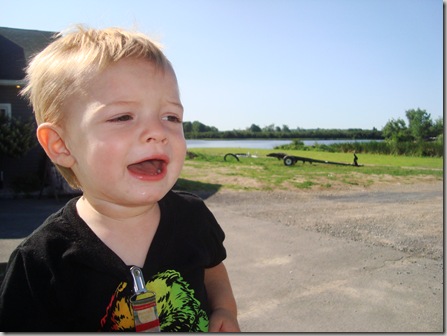 It was also my mother’s birthday (and her twin sister’s…happens every year), which meant a big dinner party at a restaurant outside of Massena. It was like a family reunion, except that it only took up fifteen places at the restaurant; a real family reunion would have required booking up two whole restaurants. And that’s just for the family on the rez.

Even in the midst of a busy travel schedule there is always time for laughing on the couch. 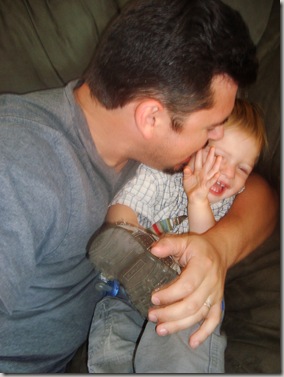 We finished off our trip to the rez with a drop-in at a Bikers Vs. Cancer fundraiser.

That’s as random as it sounds. 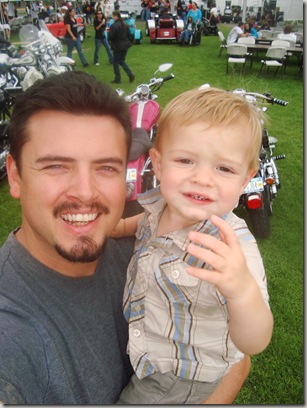 The fundraiser was at a bar/restaurant that for most of my life had been a family bar called Shaft’s. It’s been out of family hands for many years now and aggressively renovated but every time I see it I can remember being behind the bar pouring Pepsi for myself when I was six or seven, and going to wedding receptions and birthday parties.