When Erin was born and we became parents for the first time we (I, really) took many pictures. I’ve taken fewer pictures of Adrian, the second child, than I did of Erin; but Annie Lebowitz has taken fewer pictures in her life than I took of Erin when she was born. “Shutterbug” doesn’t even come close to describing what I turned into.

It is wonderful to have so many pictures of her childhood, and although Adrian is getting shortchanged a little bit, he is still well ahead of the curve in photographic evidence of his early life. I can count on my fingers the number of pictures I have of my own early years, so I’m probably (definitely) overcompensating with my own kids, but I love having the memories so available.

We started a project shortly after Erin was born that we finally finished a couple of weeks ago (so….three and a half years altogether). Every six weeks or so until Erin’s first birthday we’d drive down to Santa Cruz, go to the arcade at the boardwalk, and take a family picture in the photobooth. We always went to the same booth, and we sat in the same positions in all of them.

We kept the pictures in an ever-increasing row on the fridge, held together by magnets, until we ran out of magnets. Then the pictures went into a drawer as we promised ourselves “someday we’ll frame them”.

That someday has finally come. After moving into our finally-renovated house the pictures wound up on a shelf that was a little too out-of-sight for us to see them and remember to get them framed, but Emily finally recalled that it was something she wanted to do. So she took them to frame store and came home with our new prize. 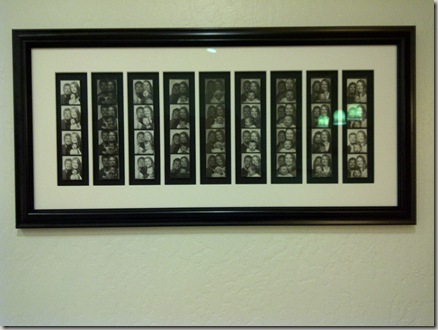 I love that family.

But I’ll always regret not doing the exact same thing for Adrian. He’ll never get us all to himself in the way that Erin did, and the year-long sequence on the wall is a reminder of that. I know that’s just what happens in families with more than one child, but it still makes me a little sad. I like having the picture on the wall, but I feel like I need to make it up to him somehow.

23 thoughts on “A Year in a Photobooth”