We told Erin we were going to see Santa at the mall today.

“Is it the real Santa, or a pretend Santa?” she asked us. I was still too tired, it being sometime before noon, to muster the energy to commit to a course of fakery and deception that I’d have to remain committed to for what would be years.

“It’s a pretend Santa, baby girl,” I drawled from beneath warm covers and dissipating dreams.

Emily had thrown me a look just after Erin had asked her question. The look said “How are we going to do this? We’ve never had the “Is Santa Real?” planning meetings. Do we lie? Do we tell the truth? What are we going to do???”

As I said, my own fatigue decided the issue for us. We weren’t going to participate in the big lie. I was too tired for the big lie. But, I was kind of a fan of the big lie: What is Christmas for non-religious people if not an opportunity to tell folkloric stories about Santa and invest the present with a hint of the magic of the past?

Emily is also a fan of the big lie. So after Tired Shawn let the cat out of the bag that this mall Santa (and by extension to a three year old, all mall Santas, and perhaps every Santa!) was a faker, Emily tempered the charge. “Santa has a lot of stuff to do, Erin. So he has lots of helpers. We’re going to go see one of the helpers.”

I remember this move from when I was a kid and just beginning to question the big lie. My aunt starting dishing out the “Santa’s Helpers” line and that helped stretch the magic out for at least one more year. I think we’ll be able to get a few out of it with Erin, since she’s younger than I was. Awake Shawn appreciated Emily’s appeal to the classic, and the preservation of some of the magic of the season for someone who hasn’t had enough Christmases yet to have a handle on the mythos.

Apart from wanting to invest in Erin’s feelings about the holidays, about how magical they are and how important thinking about others is, we have ulterior motives for promoting the big lie for now: We don’t want Erin to be the one who spoils it for her peers.

Imagine if you found out some obnoxious three year old had been spouting off, quite convincingly, about the lie, and had persuaded your own three year old that there was no Santa. Or worse, imagine that the three year old got creative, as three year olds do, and assigned Santa a spot in the graveyard because he’d been dead for a long time. That sort of thing is crushing for adults and children alike. A five year old can handle it. A six year old, yes. A three year old? Not yet.

So, we went to the mall to visit one of Santa’s Helpers. Last year when we did this Adrian was just starting to crawl and was taking joy in every simple thing. We ended up with a photo that I could only describe as a miracle. 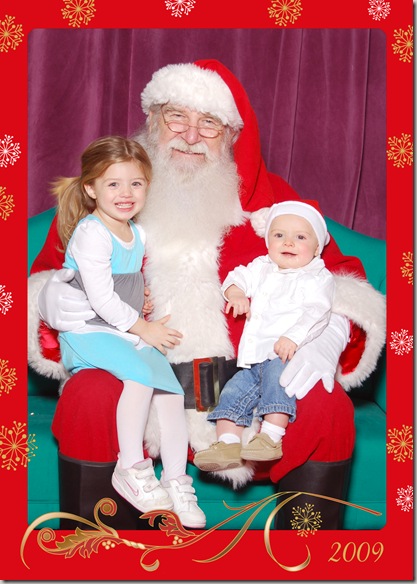 This year, despite going to the same mall, seating the kids in the same places, and even seeing the exact same mall Santa, the story turned out a little more…realistic.

Yes, realistic is the very word. 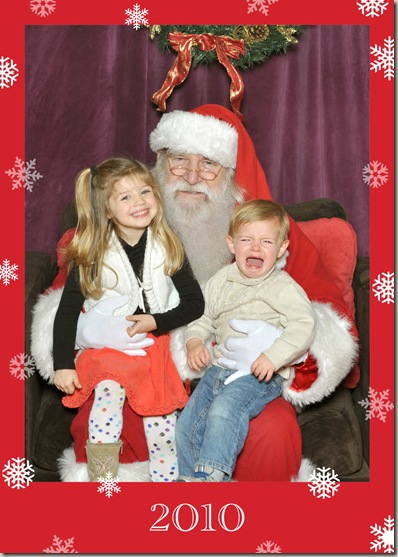