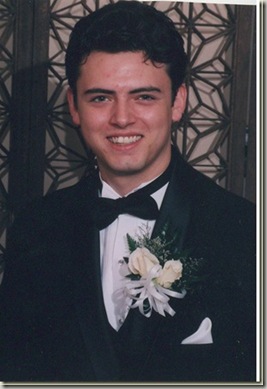 It was held in an old Masonic temple.

We entered the reception, introduced as Mr. and Mrs. Shawn and Emily Burns, to the “The Throne Room” from Star Wars.

I screwed up the Garter Toss.

Emily got cake on my face even though I could have sworn we’d said we weren’t going to do that.

I was given a corsage to wear instead of a boutonniere, and nobody noticed except the minister. He made a switch for me later, but not before many pictures were taken.

Emily’s mother saved a plate of shrimp for me from the hors d’oeuvres reception, which was being held while the wedding party was having pictures taken. Shrimp are my favourite.

We ran through a shower of bubbles to get to the limo.

We lived happily ever after.

12 thoughts on “Twelve Years and Only Yesterday”