When we moved into our house last year, we did so in advance of the remodel work being finished finished. There were floors, and bathrooms, and bedrooms, and a kitchen, and a roof (not always true, and at one point we had to replace the floors because of said missing roof). But the closets weren’t done, the window treatments weren’t done, the painting was minimal, and the front and back yards were just swaths of dirt that weeds would fill in every couple of months.

The lack of real yards owed to a long remodel: we didn’t move in immediately after we bought the place, and eventually everything died, or had concrete thrown on it during a demolition, or died, or had weeds grow all over it, or died.

We were finally able to get a front lawn in a couple of months ago, and I’ve enjoyed being able to sit out there on the patio while the kids run and play on the grass. It’s not an ideal play spot, though, being open to the street. Stray soccer balls can find their way into traffic, and I have a particularly strong fear about the kids interacting with cars.

But now we can finally do some work in the backyard. Grass, planter boxes, gravel accents, and paving stone pathways will, in the next week and a half, transform it. 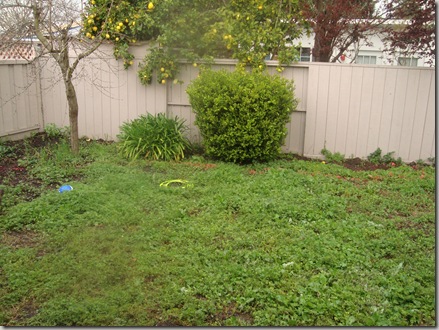 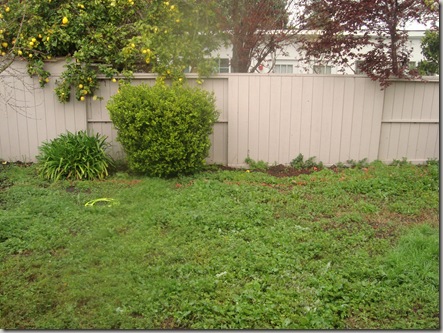 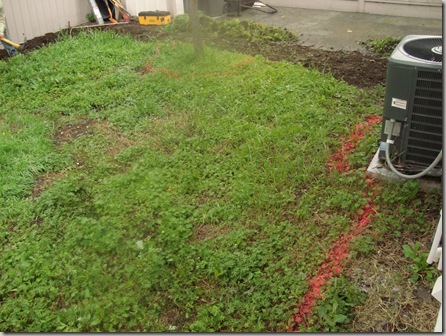 There’s a garden shed in the far right corner that is falling apart and currently stores only renovation materials that I thought I should keep. But the further from the remodel we get, the less inclined I am to care which particular kind of spackle we had on hand a year ago. Eventually, and hopefully soon, we’ll take that shed out, leaving the patio space for a barbecue and some patio furniture.

When that day finally comes, it’s party time. Meanwhile, I am very much looking forward to my new backyard. I mean the kids’ new backyard. Emily has visions of a kiddie pool filled up to overflowing back there. I’m already playing catch in my head with Erin and Adrian. Someday I’ll teach them how to throw a curveball. (Between now and then I will learn how to throw a curveball.)

We’re going to try to kill some vegetables back there during the summer, and see if we can kill some grapevines on a lattice where the yard gets a lot of sun. (We’re not…good…with plants. Predicting their inevitable death is actually optimistic. We’ll probably end up somehow killing everyone’s plants, not just our own. What’s worse than a black thumb? Whatever it is, we have it.)

Once the backyard is finished, we can live the suburban dream: never having to interact with other people in a public space ever again.