Using Random.org I have generated a winning entry number from the, I believe, 56 total entries in Backpacking Dad’s Mystery Prize Giveaway. I had to do some extra counting, since there were a couple of non-entries (just comments without guesses) and a couple of supporting entries (referrals that garnered an extra entry for the referrer), but I will gladly do math all day long for you, my good people of the Internet. 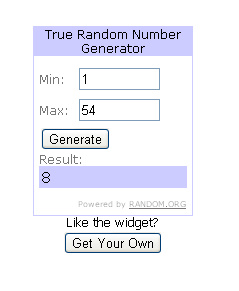 I love that Annette won this, because did you know Annette was responsible for my first, and only, foray into Chick Lit?

That’s right. Way back when I’d first started blogging Annette asked me to write a chapter in an ongoing collaborative writing project called “ChapterBytes”. The story was called “Foodie” I believe, and was about a woman who had enrolled in culinary school as a lifechange, her romance with Some Dude, and her rivalry with Some Chick. People started to add some serious twists to the story as it progressed, and it went from Chick Lit into Da Vinci Code territory. It was awesome.

Because I like to mess with people, when it came time for me to submit my chapter, I instead sent Annette this fake chapter. Thankfully she laughed.

Although it’s been on hiatus for a long time, I think Chapterbytes was really fun to read and write. I encourage you all to give it a read, to check out the bloggers who were involved, and to wonder whatever happened to Malorie and Evan….

Someone correctly guessed what the Mystery Prize was. That means that I will be promoting their charity of choice via all of my social media avenues for three days, starting later. Why later? Because I don’t want to spoil the surprise for Annette. As soon as I know she knows what’s in the bag, then I will tell you who guessed correctly, and what the Mystery Prize was, and I will begin promoting their charity.

The suspense! It continues to kill you, yes?

8 thoughts on “And the Winner of Backpacking Dad’s Mystery Prize Giveaway is my Chick Lit Editor!”