We took a walk to downtown after dinner. It’s a walk we’ve never done, though we’re not far away. We were unsure of the path, but certain of the destination: an Italian ice cream shop.

The sun was just beginning to set as we left, and it would race us to the ice cream shop, winning eventually. It didn’t have a toddler in a backpack, or a dawdling pre-schooler to contend with. It was asleep by the time we finally stood in line to place our orders.

Along the way, Erin shared one of the many games she has either learned at school or invented herself: Skip-Scotch-Toe. It resembles Hopscotch, insofar as one must hop across various lines on the sidewalk. It is skipping insofar as skipping and hopping are indistinguishable to a three year old. (But give her a while and she’ll split hairs adorably over it.) And it is “toe”, because why not? “Toe” completes any three-word, three-syllable name naturally, just as “Boogaloo” is the appropriate finale to “Something Two”, where “something” is anything at all, but most famously “Breakin'”.

Erin played Skip-Scotch-Toe while we meandered into downtown. Adrian remained on his phone the entire time. I wish I were joking. 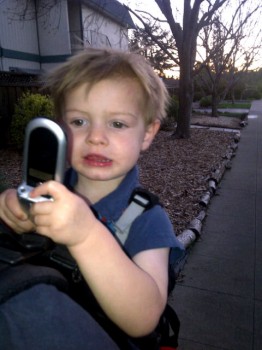 He dropped it a few times during the thirty minute walk to the ice cream shop, but he never lost interest. I should, at this point, note that the phone is dead; it has not worked for several years. We have no idea why he was so fascinated by it, except that he kept calling for the ice cream truck. “Haddo? Ice cweam twuck? Twouble?”

We spotted trains from the top of an overpass, and ballerinas moving from one studio to another in a long parade. When we arrived at the shop the single employee and the long line that formed immediately behind us discouraged me from ordering the banana split, which is what I always get when I go out for ice cream. I’m not a dessert guy, but I require a banana split, and the more disgusting the better. I settled instead for a cone of caramel pecan ice cream, the closest thing I could find to maple walnut. Emily guesses that maple walnut ice cream must be a Canadian thing, since she never heard of it until she met me. I think it’s more likely that it’s just an old lady thing, since I developed the taste for it during visits to my 70 year old aunt’s Montreal apartment every summer. The substitution was adequate.

The kids ate ice cream, and coated themselves in it. Then Adrian led a mad dash along the sidewalk to freedom, but he was foiled by his fleet-footed father. We turned around, and with Adrian once again in the backpack we retraced our steps back home. On the return journey Erin regaled us with a story, entitled either “The House Trees” or “Flamingos of the Forest”, where “forest” was pronounced “fah-rest” every time, which caused her mother and I to stifle giggles.

I looked up to the stars, bright even in the suburbs, and Adrian noted passing airplanes to the background narration of flamingo adventures. We arrived home in the dark, and it was time for bed.

I read the final chapter of “Alice in Wonderland” to Erin as she dozed off, and I had no more questions about how she was creating games like Skip-Scotch-Toe, and stories like “Flamingos of the Fah-rest”. The Lobster Quadrille, and hedgehog croquet, were more than adequate inspirations.