We returned from a trip to San Francisco, and the rain stopped falling. Erin asked me where the rain had gone. A trite, magic-y, dismissive answer formed in the back of my throat, but before it could escape my brain intervened: “Dude. You actually know the answer to this question. You know it, and you can explain it to her.”

I pulled out a marker and a piece of paper and I drew a quick lesson about high and low air pressure, adiabatic cooling, condensation, and the effect of mountains on adjacent climates. It looked like this: 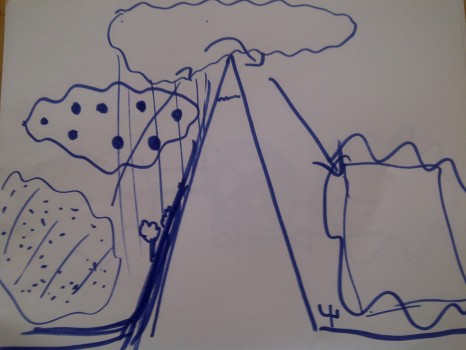 “As the air moves from one place to another, sometimes it has to go very high up. As it goes higher and higher it gets colder and colder. The drops of water in the air start to stick together instead of moving all over the place, and when they get big enough, we can see them in a group. This is a cloud.”

“If air is moving from one side of a mountain to another, because there isn’t much air on the other side, it has to go very high up, and it makes clouds on the way, and sometimes if there is enough water in the air the drops get very big and heavy, and they start to fall. This is rain.”

“As the air continues to go up, up, up over the mountain, it rains all down the side until it goes over the top, then it stops raining because it is coming back down the mountain, and getting warmer. Now the air is warm and dry, because it left all of its water on the other side. Trees, and grass, and bushes all grow on the side where there the water fell. But where there is not enough water for those, like on the other side of a mountain, not very much grows. Maybe a cactus. This side is called the “rain shadow”, and sometimes it is a dry, dry desert.”

“So, when the air has moved from a place where there is a lot of it, to a place where there is a little, sometimes it gets colder and rains, but when it warms up a little it stops raining. That’s where the rain went today: The air the rain was falling out of either ran out of water, or it got a little bit warmer by coming down and the water drops stopped sticking together so much, and so stopped falling out of the air.”

Erin was very happy with my drawing and my explanation. But she was also a little single-minded. She took a piece of paper, and a marker, and drew a tiny person inside a large shape. Then she dotted the inside of the shape with many tiny marks. Finally she revealed her vision:

See what science gets us? Water-breathing pre-schoolers.