I made a strange choice on Tuesday: I went to the park with other dads.

When I first became a parent, and then a stay-at-home dad for a while, I went on as many playdates, attended as many circle times, and made friends with as many moms as I could keep track of. I was actually spread a little thin, socially, during the first few months staying home. My circle of mom friends was pretty wide. But, unusually perhaps for a guy, I never sought out other dads, at-home or otherwise situated, to befriend.

I don’t know why, and I almost don’t care to examine this behaviour too closely, but the result of it was that I ended a year at home with my daughter with very few guy friends who were not related somehow to a mom I knew, or whom I had known before I became a father. I was good at interacting in my groups, and saw no reason to expand my friendships.

One thing that came of starting to write a dad blog was some interaction with other men, similarly-minded or situated, and many of whom were local to the Bay Area. Three years after meeting a couple of these dads, both online and at conferences, I finally decided to join them for a real, honest-to-god, physical world, playdate.

I brought both of my kids (it had been so long since I had formed my parenting circles that I had an entirely new toddler to haul around with me to these things) along to Frontierland Park in Pacifica. First, let me say that the park itself is fantastic. It sits in valley, tucked away above the coast, and the tops of the hills are in view from the green field that centers the park. 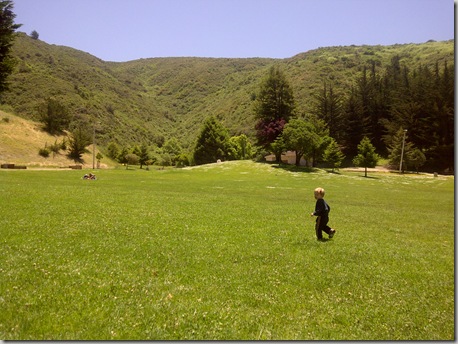 Off to one side is a large picnic area, while other tables dot the walkway along the green. The main attraction is the large climbing structure and playground area, styled as an old wooden fort. It only has one entrance (I believe, although I didn’t look around back), so whenever my kids would run inside I knew they were still in there somewhere and not loose in a parking lot.

I met up with the first of my dad friends right away (the second was on his way). His daughter and mine began playing on the tire swing together, and begging for one of us to push them higher, spin them faster. They seemed, in that moment, exemplars of the kind of play attitude kids adopt when they are playing with dad. Everything must be faster, higher, spinnier; and it is almost a game with me, and I think other dads as well, to push our own limits and to see how high, fast, and spinny we are willing to make things for the kids. (No one got sick on the tire swing, and no one fell off. This time. Maybe I’ll leave it at that.) 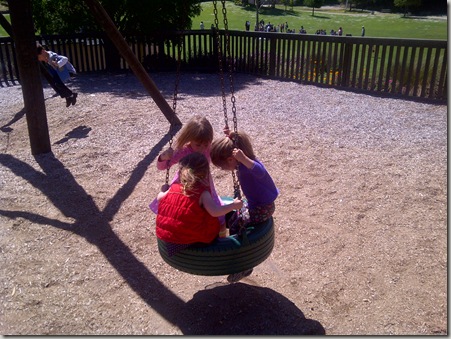 Our other friend arrived soon after, with his two daughters, one roughly my own daughter’s age, the other roughly my son’s age. The younger kids ignored each other. The older girls, now three of them, formed an uneasy clan. The other two knew each other from many, many playdates, so my daughter was the interloper. But my daughter is…how many “extros” can you add to “extrovert” before it becomes ridiculous? My daughter isn’t shy. They played together as a group, and separately, and everyone seemed to settle into a comfort zone.

After a picnic lunch, the field toys came out: baseball, soccer, and football accoutrements were distributed amongst the kids. The older kids wanted to play baseball, or some version of it. 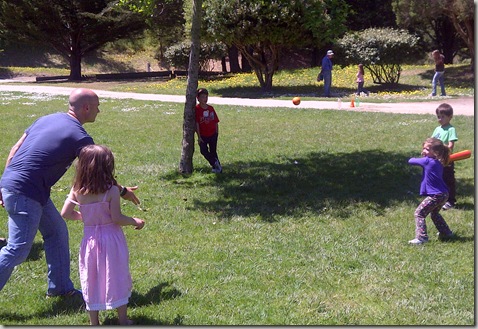 What struck me as the most shocking thing about this dads playdate was that I felt a difference at all when I examined it against the playdates I had been to with moms. It was more relaxed than any first-time-meetup I had ever been to. That might be accounted for by the fact that I knew the dads before going; I wasn’t, as was so often the case early on in my year at home, invited along to a playgroup by one mom while knowing none of the others before I arrived. I felt no stress to talk about being a dad, or even being a parent generally, really. We were just hanging out.

And not once did we turn to each other and compare how different we were from most dads in America, or from the husbands of the women at the park. That really stands out to me, now. In nearly all of my early, circle-forming interactions with moms there was always a moment where someone would say something like “I could never get my husband to do that” or “It’s great to see a dad doing something like this”. I was unusual. And even if the comparisons being made were to my credit, it was still a shade discomfiting. I felt like I was representing something, and that I had to be ‘on’, at least a little. With the dads I felt none of that tension. We were just hanging out, playing with our kids. That level of comfort is something that I’ve achieved with my mom friends, over time, but it was nearly instantaneous with the dads.

I will, for certain, be doing it again.

3 thoughts on “Dads Day Out: An All-Dad Playdate Is A Good Thing”