A June wedding on a Washington beach is the perfect excuse to go to Seattle. 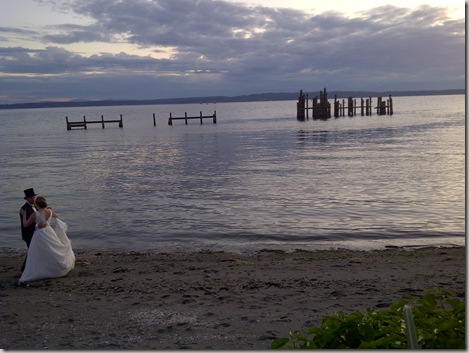 This is my friend Lauren. Lauren got married on Saturday. Say “Hi Lauren.” 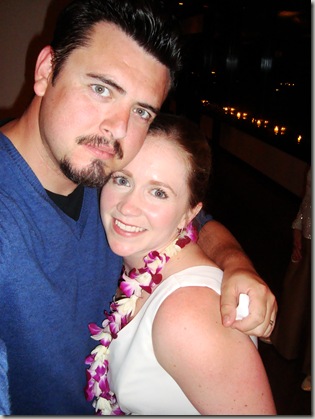 Her husband, Isaac, is the kind of guy who will wear a vintage top hat to his own wedding. I like that dude.

We flew to Seattle, and met our friend Anne at the airport. Anne has appeared previously on this blog as my New York Friend who took me to a drag show. Anne and I both knew Lauren from grad school, so Lauren’s wedding was also a nice excuse for a bit of a philosophy program reunion.

Anne was also very helpful as a toddler wrangler. 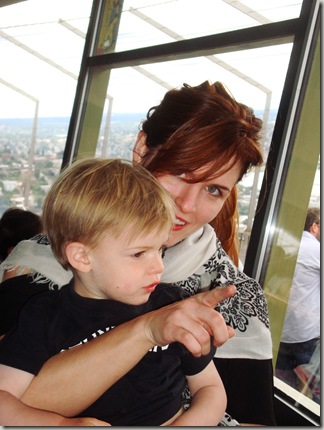 We arrived in Seattle on Friday afternoon, and walked up to the Space Needle, just a few blocks from the hotel. 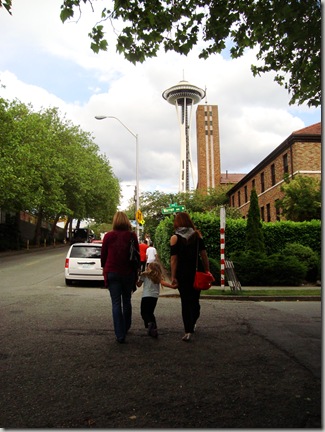 This trip involved a lot of walking, so I brought the backpack with me. 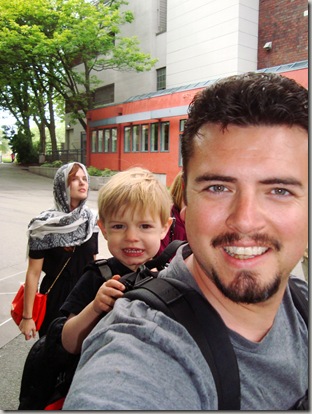 Adrian, my Adrian. How big you are now, Adrian. Too big? Not yet. Soon, too big for the backpack, yes. But not yet.

I took a lot of pictures at the top of the Space Needle, and not a damned one of them was any good. So here, I’ll fast-forward to the ladies at Lauren’s rehearsal dinner. 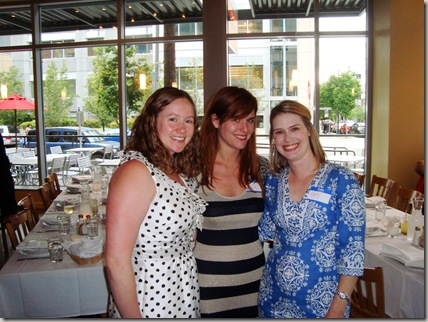 Part of the program at the rehearsal dinner was as Toast or Roast segment. A microphone was passed around, and friends and family shared stories and thoughts about the happy (and sometimes embarrassed) couple.

Erin begged for the microphone. Emily said “no”. Erin asked for it again. Emily said “no”. We knew that if Erin ever got her performer’s mitts on that microphone we were never going to get it back, and we would be hearing track after track from the Disney songbook.

Not to be defeated so easily, Erin also asked Lauren. 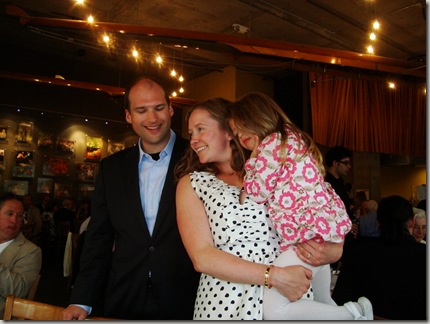 Lauren, the generous spirit that she is, would have let Erin do it too. But unfortunately for Erin the very first thing she did was run over and say “Mommy mommy, Auntie Lauren said I could have the microphone!!!”

We put the kids to bed late, and woke up late on Saturday morning. We walked down to Pike Place Market and played on the grass. 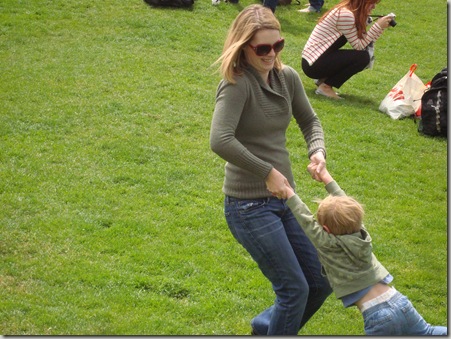 We were overlooking the Rock ‘n’ Roll Marathon route, so Erin and I were able to look down at the runners (and walkers, and one cyclist) who were going by. There were many costumes, including this one: Zach Galifiniakis from The Hangover, with satchel. 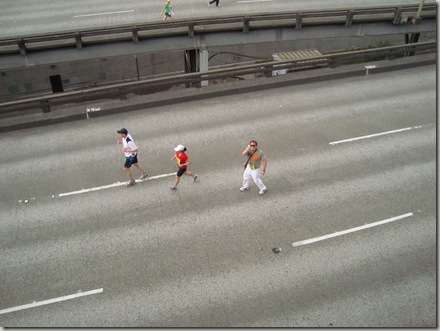 We did a little shopping at the Market, then went back to the hotel for naps before the wedding.

We arrived for the ceremony late, but looking good. 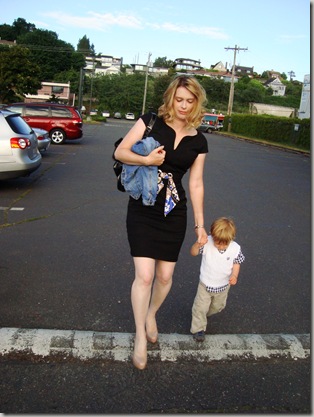 Although there were other kids at the wedding, ours were, of course, the talkative ones. We were unsuccessful in our shushing. 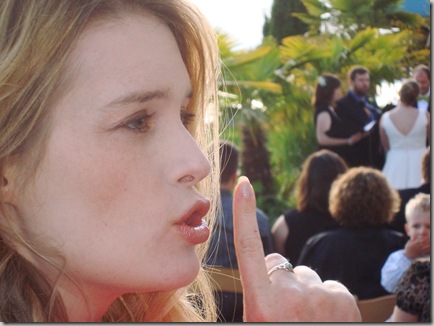 Their extrovert nature, though less-than-desirable during very quiet moments, served them perfectly well during the reception. They ran, played, and danced. I taught Adrian how to moonwalk, and I swear to god he was doing it all over the dance floor. Bubble guns and bubbles were everywhere. 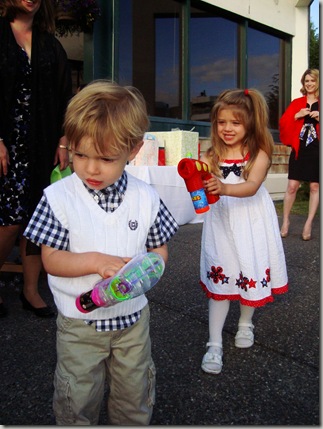 There were also quiet moments against the Washington sunset. 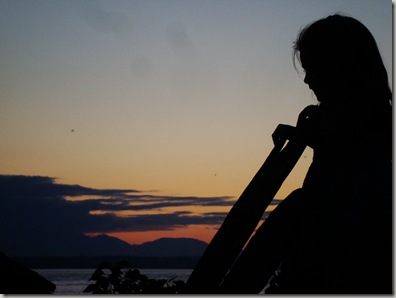 Sunday morning we awoke, and breakfasted, then drove to Oregon. Some friends from Emily’s law school days live there now with three kids, two of them the same ages as Erin and Adrian. We had a barbecue on the deck of the Oregon mansion they bought for nine dollars, and the kids played and played and played and played.

On Monday morning we joined them at the Oregon Zoo. There was much green. 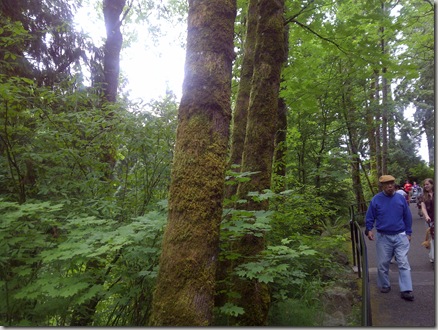 We ate lunch at one of the zoo eateries, and I casually tweeted something about how zoo eateries are always serving crap in crap, even though zoos are otherwise committed to good things like environmentalism and conservation. So, of course, the Oregon Zoo tracked me down on Twitter and offered me a cookie.

Of course. Because that’s just how the world works. The Zoo also said something like “We have this other restaurant that is all local and organic and sustainable and stuff.” So, if you go to the Oregon Zoo, check out that other place. Or, do like I do and get offered a free cookie. (I never went to get my free cookie. I felt like the zoo had caught me being snarky behind its back and I didn’t want to face it.)

After naptime we met up with my old philosophy mentor, Ryan, from my U.C. San Diego days. He was a great teacher and I spent a lot of time in his office reading passages from Malebranche and Locke and trying to figure out what the Early Moderns were talking about.

He also swings on swings, but not as high as Erin does. 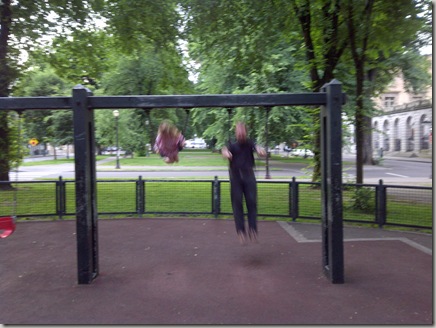 We have great memories from this trip, and some weird ones (sorry about the poo on that one tree, Portland), and we realized we have very many reasons to return to the Pacific Northwest. Thanks for that, PNW.

(Seriously, sorry about the poo, Portland. But if you don’t want poo on your trees you should definitely unlock your park bathrooms.)

6 thoughts on “Erin and Adrian Go to the Pacific Northwest”