I will write two stories, and post two pictures, related to BlogHer’s 2011 conference. I told these stories several times at BlogHer’s 2011 conference, so if I spoke to you at all in San Diego, you probably already heard them. Possibly, you heard them more than once. Possibly, you heard them more than once as I told them in exactly the same way, with the same hand gestures.

I’ll be telling them again now.

Do you know Loralee? I know Loralee. I’ve known Loralee for almost three years now. We’ve spent time together. I’ve read her blog, keeping up to date on her doings and her family over all the time we’ve known each other. I just want to make it as clear as possible that Loralee and I are not strangers. I saw Loralee again this weekend in San Diego.

Now, Loralee has a twin sister whom I’ve never met. Save that little detail for a few moments. It will become relevant to the story.

I ran into Loralee at the hotel, said hi, pinched her arm fat (it’s a thing I’m allowed to do; don’t try it), gave her a hug, then bye. BlogHer is like that: a lot of quick hellos, then moving on.

Later, as I was talking to Neil (namedrop) at the People’s Party, I saw Loralee again, crouching down beside a table, with a baby in a bjorn strapped to her chest.

-A baby? Wait a minute. Loralee’s son is about a week younger than Adrian, so he’d be well over two now. Whose baby is that?- I wondered to myself. Wanting to talk to Loralee again anyway, and thinking I’ll open with the obvious “You stole a baby?” joke, I strode across the middle distance to where she was crouching, stood tall before her, pointed at her chest, and demanded “Hey, whose baby is that?”

I want to say that again: I walked up to her and demanded to know whose baby was strapped to her chest.

Looking confused, she replied, “Um. Mine.”

-What? WHAT? Okay, something just happened. Oh shit.- It suddenly occurred to me that this woman, though looking strikingly like Loralee, was not Loralee.

Loralee, who has a twin sister.

Really, this story should end here: Ha ha, I walked up to Loralee’s twin sister and demanded to know whose baby she had. Without any greeting, or introduction, a strange dude walks up to her as she crouches, vulnerably, protecting her child, and he implies that she’s stolen a baby. Then, everything is straightened out because, ha ha, she’s Loralee’s twin sister and she gets that all the time, and especially at something like BlogHer where Loralee is well-known.

No, this was a complete and total stranger. Her name is Kerri, and she writes The Maven of Social Media.

I’ve blocked out most of the awkward apologizing and explaining that followed. You know how they say you never get a second chance to make a first impression? That.

Luckily, she had been informed of the likeness once already at the conference, so it wasn’t totally out of the blue. Also luckily, Loralee was nearby and I was able to drag Kerri over to her for an introduction, and to take this picture, because I’m not just stupid: there’s a resemblance. Right? 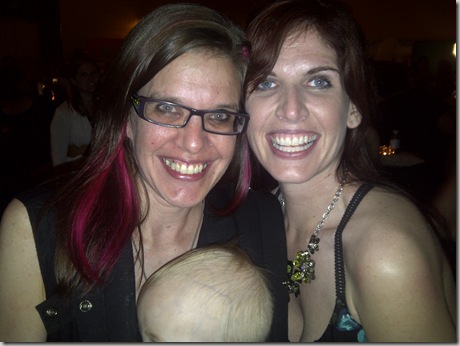 Kerri is the one with the baby. And Loralee totally has glasses like that.

I was so embarrassed by this that I even felt sympathy for my doppelganger, Scott Stratten, who was at the Blissdom conference this year and had one or two people come up to him and greet him as “Shawn” or “Backpacking Dad”. I thought it was hilarious at the time, and teased him about it. When we finally met in New York in December I got a really terrible picture of the two of us that doesn’t show the resemblance very well, but it’s there if you look hard. 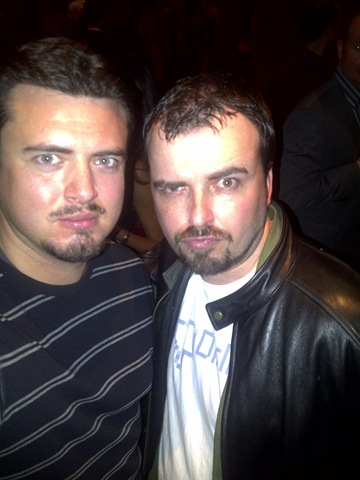 So, I felt sympathy for Scott now that I’d made a complete ass of myself during an unforgettably awkward moment with Kerri.

It was Friday, and I was on a boat with some other bloggers, going to Coronado. Gwen Bell, whom I’d never met, saw me and made a smiling beeline right for me. She extended her hand and exclaimed, very enthusiastically:

“Scott! It’s so nice to finally meet you. I’ve really been looking forward to this. I’m Gwen Bell.”

So, a guy goes to BlogHer and…

When I went to BlogHer in 2008 I went to the all-guys Birds of a Feather session. I don’t remember what it was called, but it was nice to sit in a room with some of the men who had decided to take BlogHer’s overt statements about inclusion at face value and show up to a conference aimed at women. Back then there were only a couple of bloggers in the room, and some PR guys. There were also a few women in the room, anxious to find out what the guys’ experiences at BlogHer were like, or to talk about having men at this conference. It was a good session.

This year there were many, many more men at BlogHer. There were many dad bloggers, many social media guys, PR guys, husbands, and more. Knowing a lot of these guys already, and knowing a good joke when I see one (Patriarchy!, with an exclamation point? That’s just good ironic humour right there boys), I saw the Patriarchy! session listed and decided to go check it out, hang out with some guys, maybe do a little mentoring for the new guys who had never been to a BlogHer before.

I opened the door and the first thing I saw was a woman in one of the chairs in the room. I was put off balance a little, having expected nothing but men, but I recalled the 2008 session with its female attendees and quickly adjusted my expectations. As I opened the door wider, however, I got a better view of the room and its occupants.

The chairs were arranged in a circle in the center of the room, and although the chairs were not all taken, every single person in that room was a woman. Now I had some doubts that I was in the right room. I stopped halfway through the door and turned around to look for…something…that might indicate that the guys had been moved to another room.

There was nothing. There was no salvation from this awkward half-entrance. Even worse, everyone had turned to look to see who had come in the room.

“Hi Shawn!” someone called from the center of the Circle of Power. It was Denise Tanton, BlogHer’s community manager and frequent Facebook updater. It was then I realized that although the title may not have been meant to convey total seriousness, the Patriarchy! session really was about patriarchy, in the “down with the” sense.

“Have you come to join us?” Denise asked, good-naturedly.

I sat down next to Denise, introduced myself, admitted to that group of intelligent, intent, and forgiving women that I had utterly mistaken the nature of the session, and then committed to staying there to learn something.

I’m reading all the session descriptions next time, though.

43 thoughts on “Doppelgangers and Patriarchy! Tales from BlogHer ‘11”