As Erin approaches kindergarten age, we have begun our shopping of area schools. Today’s visit was to a French immersion K-8. Erin now says she wants to go there, because she wants to learn to speak French. 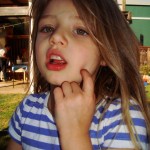 All I could think of the whole time I was there was “chow-dare”.

Being Canadian from eastern Ontario (though now ex-pat), I grew up with French all around, and was in immersion myself in grades 7 and 8. The thought of sending her to immersion is very appealing to me.

But, the school is focused on academics over arts and athletics. I wouldn’t normally care if an elementary school didn’t have a baseball team, but there don’t seem to be any drama or performance classes on offer. I’m an academic, so I would have been fine attending this school; Erin, as many of you know by now, loves performing, so we’d have to find her outlets for that beyond school.

There is another school in the area that has a drama focus.

We are privileged to live where we live, to have these options available to us, but it’s still a stressful position to be in. I don’t want to make the wrong choice.