Erin, Adrian and I sat at the table, eating our lunch, when Erin erupted.

“I know, whenever I feel really angry, I can tell everybody about it! I can hold up a sign and everybody will know that I’m really, really angry.”

“Why would you…how…where did you get that idea?”

“The tea party…” WHAT??? Who the hell told my kid about the Tea Party? “…that we went to. When me and mommy were at the tea party, people were holding up signs because they were really angry. I think they were in line for the Ferris wheel.”

Things clarified a little for me with that. Emily had taken Erin to the Fairmont in downtown San Jose for tea with one of her friends. The city is in the throes of both Christmas in the Park and #OccupySanJose, and protestors must have been gathered near the hotel. 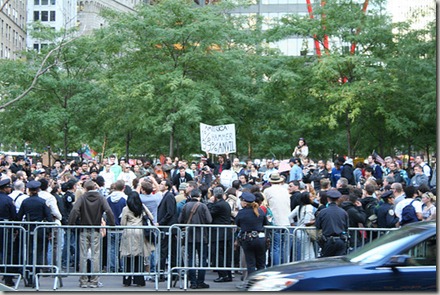 Like this, but I bet there were only about twenty of them. San Jose isn’t too outraged.

It’s a funny ol’ world. My four year old knows that if she’s really angry, she has this option, to hold up a sign and tell everybody about it. So now, I’m girding myself for the following slogans to start showing up on signs around our house:

1. “END THE EMBARGO AGAINST MCDONALD’S!”

3. “BATHTIME IS A TOOL OF OPPRESSION!”

4. “MY LITTLE PONIES, NOT MY LITTLE BROTHER!”

5. “DOWN WITH THE PATRIARCHY! ALSO THE MATRIARCHY!”

Based on some of the tantrums I’ve seen out of her, I don’t think teargas will have any effect.