We joke to ourselves that Erin lives in The Bubble, a special place where everything is warped in her direction, flowers turn up to face her, and lines happen to other people. This phenomenon is never more apparent than when we go to Disneyland, where Erin exerts a special control over her surroundings, bending the world to her enthusiastic will and making it provide her with special experiences that she can’t even entirely appreciate yet.

We walked in the front gate, and within 30 seconds Alice grabbed Erin’s hand and led her dancing around and through the crowd before settling down to watch the Mad Hatter lead some dads in a dance number. I caught the second part of this on video, but since it happened so damned fast after walking through the gate I was still gathering my wits. I hadn’t expected to be required to capture any special moments so soon.

I was not one of the daddies.

On the next day of the trip, as we were walking out of the park to go somewhere, the same Alice and a different Mad Hatter followed Erin’s lead in a long, improvised dance number. It was hilarious. Who gets to do this? Erin, that’s who. 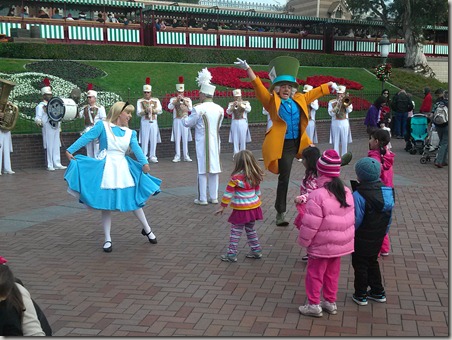 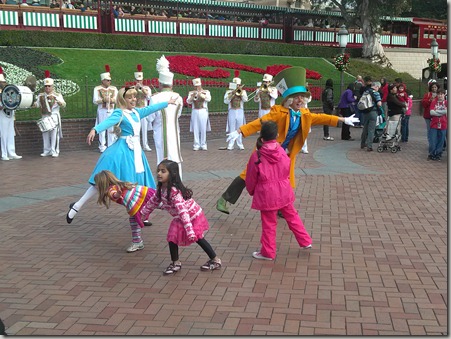 Since it was Christmas time, we sat and enjoyed the Christmas parade. We watched the floats float by, the characters waving and playing and dancing, and Mrs. Claus knitting in her rocking chair. As Mrs. Claus’ float passed by she called out to Erin, Adrian, and Erin’s BFF by name, wishing them a Merry Christmas. When Santa’s float passed by he did the same. These personal shoutouts during the Christmas parade were arranged by our friend Steven, a Disney fanatic and former cast member who usually joins us on our visits and who wears awesome shirts like this: 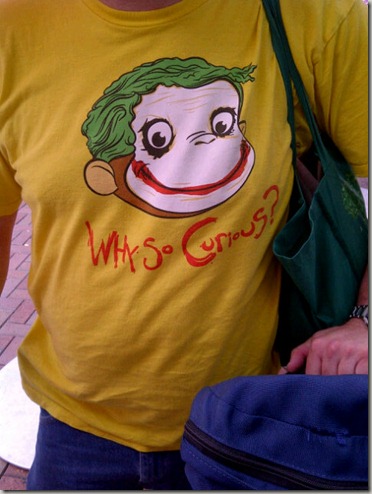 We had dinner at Goofy’s Kitchen on the last night of the trip, and one of the characters making the rounds to the tables was Snow White. Erin was very excited, because she had just seen Snow White at Disneyland a few days earlier (more on that later), and she couldn’t wait to reconnect with her and get her autograph in her little autograph book. There was no way I was going to spoil the meeting by letting on that this Snow White probably wouldn’t remember an interaction that happened in the park itself a few days earlier (you know, because there are several actresses playing Snow White…you know that, right? Oh, sorry), so when Erin saw her approach the table and launched into her “It’s so great to see you again!” kind of greeting, I caught Snow White’s eye and gave her the ol’ “You know, from the other day…you took took her on a parade around the castle with Cinderella and the Queen…” and Snow White played along and said “Oh of course I…Oh, it’s you Erin!”

I should back up a little. See, on the second day of the trip, Cinderella, Snow White, and the Queen took Erin on a promenade from Tomorrowland, through Sleeping Beauty’s Castle and out the other side, then back across the front of the Castle.

Please give it up a little for the dad who walked backwards around Disneyland to record this and who didn’t bump into a single person. Skills: I have them.

IT. WAS. AMAZING. It was unique and envy-inducing and so special that it was the kind of thing you see and think “Wow. I bet that family paid a crapload of money for that special moment…” and you’d be dead wrong. It happened because Erin is Erin, and she’s been molding Disneyland in her image for years and she is genuinely, honestly, loved in that place.

When the walk was over, and hugs were doled out, Snow White gave Erin a big kiss on the cheek, leaving a lipstick memory behind. Erin wouldn’t let us wash it off, and days later when she saw Snow White at Goofy’s Kitchen she wanted to show her that she still had it there.

“Oh, it’s you Erin!” Snow White exclaimed, because in this weird world we were in of course it would be the very same Snow White here at the table as had held Erin’s hand around Disneyland. 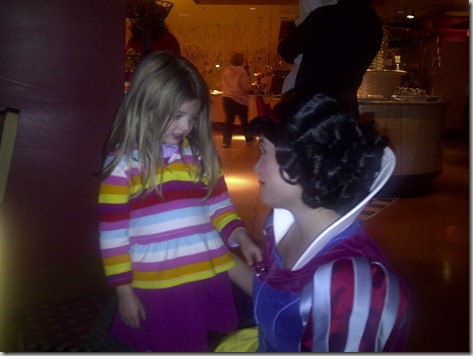 She admitted it took her a moment to recognize Erin without the hat she’d been wearing, but once she realized it was her she spent a crazy amount of time at the table with Erin and her little BFF (our friends joined us for the second half of the trip). It was no hit-and-run table wave, but a visit with a friend, and it was exactly the kind of thing that happens in Erin’s Bubble. When it was time to go, Snow White planted another lipstick memory on Erin’s cheek.

This is what happens when you go to Disneyland with Erin.

8 thoughts on “If You Go to Disneyland With Erin, Part 2”