We woke up this morning, a Monday, a home day, with no plans. I decided over eggs that I would take the kids hiking up in the Montebello Open Space Preserve.

When you get to the parking area on Page Mill Road just before Skyline, you have several trail options. We’ve gone left, along a gentle, wide trail call Canyon Trail, before. And we’ve gone straight down along Stevens Creek Nature Trail. This time we went right, along White Oak Trail. For Adrian’s first hike I didn’t want to go straight down Steven’s Creek, with its switchback-after-switchback. We could come up that way, but down inspires running, it’s not a great trail for a toddler to run on. So we were either going right, along White Oak, or left, along Canyon. I let Erin choose. 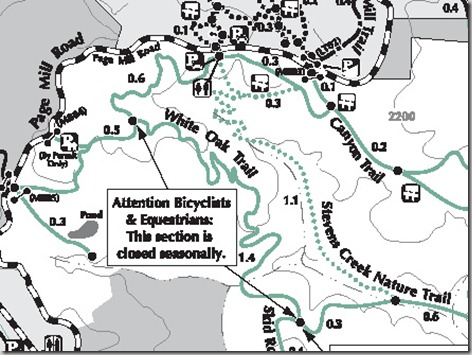 Erin chose right, so we started off along White Oak Trail. 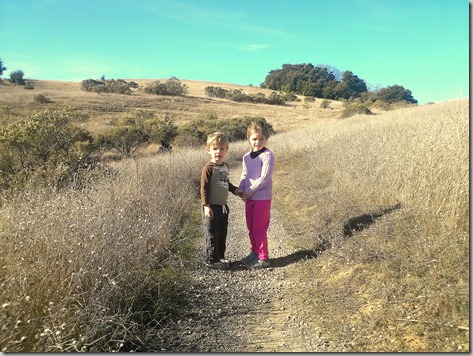 The grassy hill sloped gently, and the trail wandered in and out of the edge of the forest growing up from the creek below. 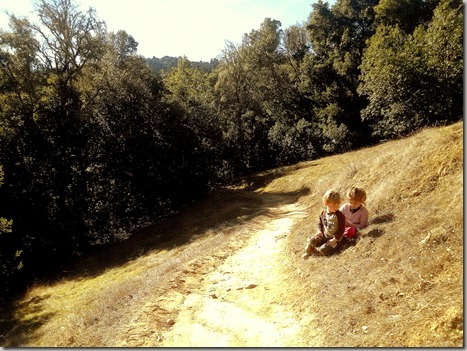 White Oak Trail narrows at a few points, but for most of the roughly two miles down it is wide enough to walk at least two-, and sometimes three-abreast. Erin and Adrian took turns being recklessly daring, running up ahead, and feigning fear of the deep, dark forest. “Are there witches here?” Erin asked me. This is what I get for reading Grimm’s Fairy Tales to her. 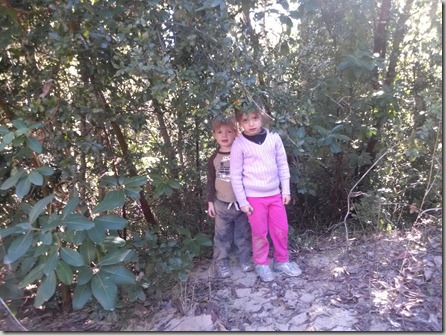 Eventually, we reached a small wooden bridge, White Oak’s concession to the creek. 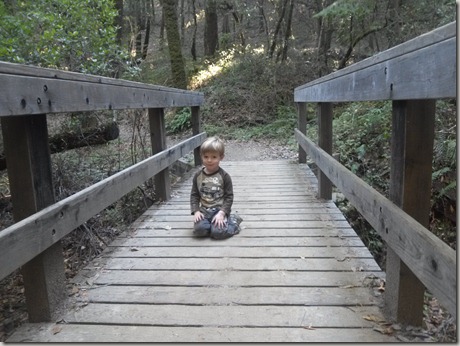 We snacked there, and were briefly interrupted by a trio of riders crossing the bridge on horses. This was a bit of a thrill, since the kids had been noting hoof-prints along the trail the entire way down, and I told them about horses and horse shoes and how to tell which way a horse was going by the print; the kids were primed for horses and suddenly here they were! 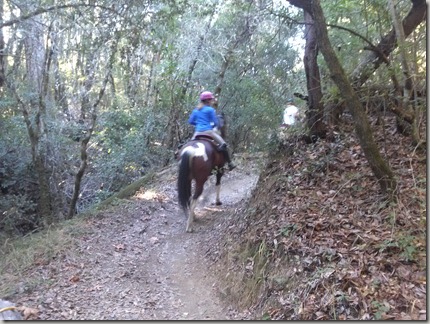 We continued down, eventually turning onto the Stevens Creek trail to climb back up the hill. Two more wooden bridges and a rocky ford helped us cross Stevens Creek a few more times on the way back up, and broke up the monotony of climbing switchbacks. Erin found her own way to break up the monotony: Even in the forest, she’ll jump into the spotlight to put on a show. 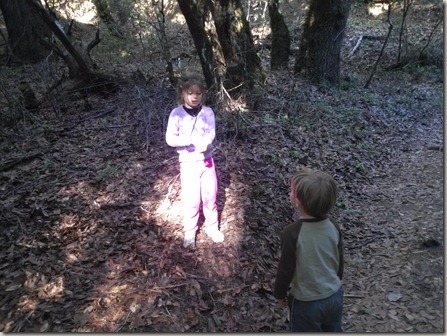 As we broke through the forest to the grassy hillside again, the temperature change was noticeable. I had been surprised at how much warmer it was at the top of the mountain than down at our house; I’d packed heavy jackets just in case, but left them in my backpack as we hiked down into the woods. Coming out of the woods into the sunshine I noticed how cold it had really been among the trees, and felt a little guilty that I hadn’t thought to put jackets on the kids when we were down in the shade. I think I get points for at least bringing the jackets. 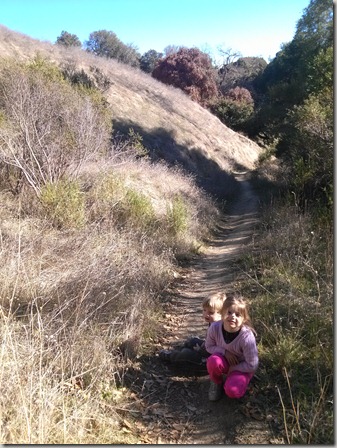 By the time we returned to the car we had walked about three miles, two of them gently down; one of them steeply up. It wasn’t a long distance, but it wasn’t short either, especially if you are two-and-a-half. 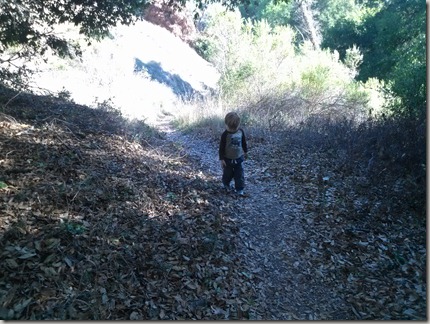 And that is how Adrian went hiking for the very first time. Kind of.

(Note: I’ve left out of the story any of the whining, complaining, petitioning to go home, lolly-gagging, and requests for candy. Those are my special memories.)