I went to see a live recording of the Nerdist podcast on Saturday night. As part of SF Sketchfest, Chris Hardwick brought co-hosts Jonah Ray and Matt Mira to San Francisco for about an hour of stand-up comedy ahead of a podcast interview with Dan Harmon, creator of NBC’s show Community. It was my second Nerdist show, and I’ve been a fan of the podcast since early last year. It was the Nerdist, and Matt Mira in particular, that inspired me to read The 4-Hour Body and to start losing weight, so when I met Chris and Matt after the show I had a chance to thank them for that in person. 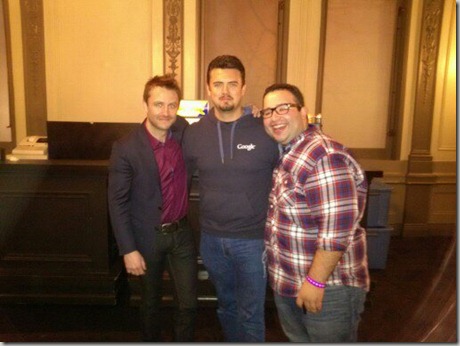 The stand-up was good, but underappreciated by Harmon who, “blind drunk” (as he repeatedly described himself), kept up a running show of genuine or exaggerated pique at being kept waiting in the wings for three hours with nothing to do but drink. (He arrived two hours before showtime, at a Nerdist staffer’s request, he said.) He was funny, and we laughed along with him quite a lot as he aped doing stand-up bits, starting with premises like going to the post office, but returning again and again to a “this is how white people do this….this is how black people do this” joke about jokes. Delivered sober, I’d have appreciated this, but delivered drunk it didn’t work the eighth time in a row Harmon brought it out. He couldn’t keep it good-natured enough, allowing cynicism to lead him around by the nose. Chris Hardwick, sober for nine years now, tried to keep the interview moving along, but I couldn’t help wondering if he saw his former alcoholic self a little in Harmon’s spiraling performance. No doubt he wanted to keep everything light, so he never really tried to reign his guest in, but this meant Harmon ran roughshod over the panel. As I said, he was funny, so it wasn’t a waste of anyone’s time, but I’m sure it wasn’t how anyone had expected the interview with Very Special Guest Dan Harmon was going to go.

It wasn’t all Harmon being his own Drunk Hulk, though, since of course he was able to answer some questions about the business of writing pilots, putting on a show, why he would never go back to writing features (because in TV the writer is the king, while in features the writer is a cog), and about Inspector Spacetime, the Doctor Who parody that appears on Community on occasion and who has become a nerd icon in his own right. But while fielding questions about Community, Harmon’s inebriated honesty may have gotten the better of him: He seemed overwhelmingly cynical about the future of the show.

Is Community going to be cancelled?

Nobody asked that question. And Harmon never said anything specific. But his attitude about the likelihood of doing such-and-such with Abed, or casting Chris Hardwick as a regenerated Inspector Spacetime, was very negative, as though he had already written off Community’s future.

Admittedly, the conversation was loose and rambling. His addled brain may have been seeing the world much more darkly than realistically, and so that may have been infecting his attitude as he spoke about the show. Or, he may have been more honest about the show’s future than he would have been had he gone on stage completely sober.

Dan Harmon was embarrassed by what went on, and on Sunday morning he apologized to Chris, Matt, Jonah, San Francisco, America, Comedy and Erin McGathy.

I don’t want to give the impression that Dan Harmon spoiled the show in any way. In fact, I think much of the crowd enjoyed bearing witness to it. I know I laughed a lot, even if it was with increasing discomfort every time he pulled out his “white people/black people” meta-joke. I want Community to be on the air for years, but I’m afraid that I what I saw on Saturday night was a show creator already in mourning.

9 thoughts on “Is NBC’s Community Already Dead? Dan Harmon certainly acts like it is.”