Being in need of groceries on a Sunday afternoon, I hustled two small children to the store and prepared my script:

“No touching the salad dressing bottles.”

“No touching the pickle jars.”

“No squishing the bread.”

“No poking holes in the plastic wrapping on the chops.”

“No running down the aisles.”

“No eating apples straight from the bin.”

“No eating chicken straight from the bin.”

Because with two kids, and at a store other than Costco with its giant shopping carts, there is only room for one in the cart itself. The older child must be entrusted to walk alongside.

(Or, in Erin’s case, to hang off the side, the front, climb underneath, skip behind, and occasionally get run over a bit when she’s not paying attention.) 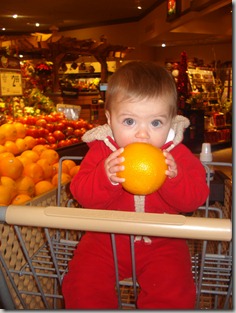 Not pictured: Adrian. Erin used to be a champion cart sitter, though.

I grabbed a cart from the cart area and walked it back to the car. I loaded Adrian in the seat and then I saw it. Every parent’s nightmare.

There was no seat belt in the shopping cart!

Now, you can never really know how you’ll handle this kind of emergency until you’re in it. I mean, sure, you can make contingency plans until you’re blue in the face and the cows have come home and the fat lady is all out of breath, but they don’t mean a damn thing when you’re right there, staring at the frayed ends of what used to be your child’s salvation.

So, there I was. I was finally in it, you know? Like in it for real? Everything had hit the fan and I had to choose: Leave Adrian in the death trap, or lift him out of his seat and walk all the way over to the cart return to get a new cart.

I froze. I admit it. There seemed to be no good answer. Because even if I did manage to somehow get Adrian out of the cart he was in, there was no guarantee that there would even be a cart with a working tiny buckle and thin strap waiting for me at the other end of what I knew would be an epic journey. On the other hand, sitting in a cart with no seat belt is the shopping equivalent of loading a revolver with 5 bullets and handing it to your drunk friend.

I won’t tell you what I chose. I think this is one of the truly divisive issues in parenting today and I don’t want to get blogged at.

(P.S. The cart return was at least eight feet away. One does not simply walk into the Safeway cart return area.)

4 thoughts on “The Shopping Cart Dilemma”