“But dad, you never bake,” Erin said, accusingly, when she saw me walk into the kitchen.

It’s true, in a hyperbolic way, that I never bake. Emily is the one who enjoys making frostings and batters. She’s the one who requested a stand mixer. She’s the one who likes reading recipes for cupcakes with things in them that I’m not even sure count as food, but are all the rage in New York.

I don’t think I’m clinging to an old male stereotype by not baking. It doesn’t have anything to do with manliness, with thinking that wearing a flour-dusted apron implies something about virility, or power. 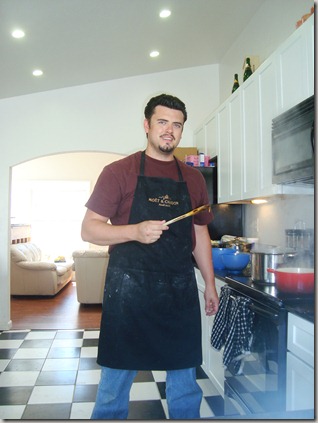 Besides, my apron kicks ass. Watch me can jam.

If we’ve learned anything from The Food Network, it should be that bakers are guys with tattoos and shaved heads, or hipster chicks with Elvis Costello glasses and lip rings. No, I don’t bake because I don’t enjoy the measuring, the dark magic of what happens if you get the corn starch level wrong by a fraction. I don’t like having to eat my failures, and there have been many failures.

I have a history of getting pancakes wrong.

So, no, I don’t often bake, beyond heating up some frozen biscuits in the oven. If baking is done in the house, it is because Emily has decided she needs to do a cupcake throwdown.

But just because I don’t bake is no reason to say it so accusingly. Especially since, despite what was suggested by Erin’s tone, there was no baking going on. I had just wandered through the living room, into the kitchen, to get some water, when Erin, as though it had been on her mind all morning or as though she needed to continue a conversation we’d been having in her head, but now out loud, accosted me with my habit of totally not baking.

“But dad, you never bake.” You’re right kid. I also never water ski, but I don’t see you bringing that up. Stop being random at me.