Once, there was Puck, the Great Vanishing Cat.

When Puck was tiny, he vanished under tables, and chairs, and beds.

When Puck was big, he vanished into boxes and closets.

Puck was shy, and afraid of most things. He hid when he could, to feel safe from the world.

Strangers and visitors did not believe that there was a cat named Puck in the house. They never saw him. They never heard him.

Even Puck’s meow was shy, and hid in his throat, squeaking out from time to time.

For a shy, vanishing cat, Puck sure was big. He was the biggest cat anyone had ever seen (when they saw him, which was almost never). There was so much Puck that the doctor said he needed to vanish, little by little.

But Puck, the Great Vanishing Cat, was very sick. He was so sick he could not vanish into boxes and closets, under tables and chairs and beds.

But even though Puck has vanished, I still see him. He’s in the corner of my eye. When I turn to look, he vanishes again. But I know he is there. 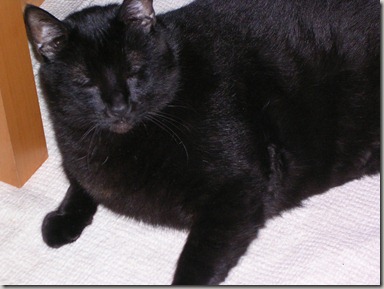