On Friday afternoon I went to San Francisco. Emily had purchased a certificate for me on Gilt City, good for a shave-and-a-haircut at one of those “The Art of Shaving” places. They’re around in some malls, selling shaving products, and when she bought it she may have thought I could go into any of them to redeem the certificate. Unfortunately, only some of the locations have a barber, and the closest one to me was up in the City. So, as I said, on Friday afternoon I went to San Francisco.

My appointment was for 3pm, the only time slot they had available on either of the two days I could go before it expired, and as it turned out the window they had open was only long enough for either Royal Shave, or a regular shave (and a haircut). I needed a haircut, but figured I could get a haircut anywhere, and there were few places or opportunities left to let someone near my throat with an exposed blade, so I signed up for the Royal Shave.

It was a meticulous process. I swear it felt like the barber was cutting each hair individually. The whole thing took about forty-five minutes, with a couple of hot towels and lotions and things thrown into the mix. It was like a manly massage with knives, and I almost fell asleep in the chair at one point.

Afterward, clean shaven but still requiring a haircut, I had Emily call the salon she uses, located near where I was anyway, to see if they had an opening. I’d rather take a chance on a place that someone I know likes, than wander into one off the street and risk a disaster. And it was already a bit of a pampering day, so why not extend it by a little longer? Supercuts can get my business back next time; let’s see what a salon can do.

It turns out that what a salon can do is almost exactly what Supercuts can do, except that it’s done with exquisite care instead of clippers and thinning shears. My stylist, after telling me he was really into shape, and sculpture, right now and was trying to improve that aspect of his practice, got a little irritated that my hair looked like it did after getting my last cut done at Supercuts. “Even at Supercuts, there must be the occasional someone who has a natural eye for shape,” he lamented, as he started to cut my hairs one at a time to achieve his desired result. I don’t want to suggest that there was no value in spending the extra money on someone who knows what they are doing, but it’s the kind of value that’s only there in its subtleties, like comparing a $10 bottle of wine to a $100 bottle. You’d have to be paying a lot of attention to the details to tell the difference, and most people just don’t pay that much attention. 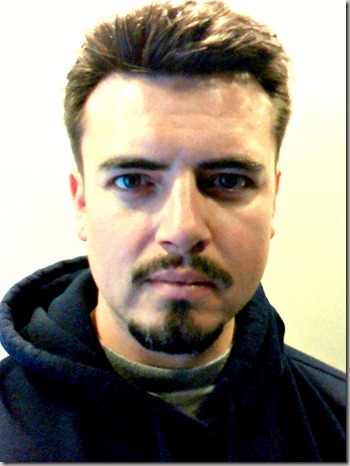 I cleaned up good. Too bad I don’t know how to dress. Who wears a hoodie?

After the cut I wandered around Union Square for a bit. I had arranged to meet my friend, Uncle Shopkeep Alexei (from the now-world-famous San Francisco indie boutique, Fiat Lux) after he closed the shop at 8pm, and I still had some time to kill. I bought some running shoes, because the pair I had on had been falling apart for months, and walked by a Williams Sonoma that had a line out the door to see Giada de Laurentiis inside.

I almost got in line, my crush on Giada being a powerful thing, but I haven’t had cable in a year, so I don’t really watch her shows now, and I’ve never read her books, and when I realized that I’d be standing in line for an hour to basically say “I like watching you eat”, I felt I should probably just keep walking. That’s the kind of weird you shouldn’t share with anyone (except for you, Internet).

I grabbed something to eat, then went over to the shop and spent the last hour before closing talking to Alexei and one of his jewelers before we made our way out to a bar across the street.

As I sit here and reflect on my day, I realize that, essentially, what I did on Friday was get myself all pretty, put on some new shoes, and go on a man date to a gay bar.

See you next time, San Francisco!