Crown Royal asked me to review their new Crown Royal XR (Extra Rare) Cask Whiskey. It seems Crown Royal closed one of their Montreal distilleries in the early nineties, and this batch is the last one produced by that installation. So, it’s rare because it’s from a building that no longer makes whiskey for Crown Royal, and not because it has a cool, red center like a steak. Since I am well known for my brilliant reviews of rare cask whiskeys (reviews of rare cask whiskeys run every Saturday and Wednesday; wines on Tuesday and Thursday; Gatorade/Powerade on Monday and Friday; Milkshakes on Sunday) , I agreed. 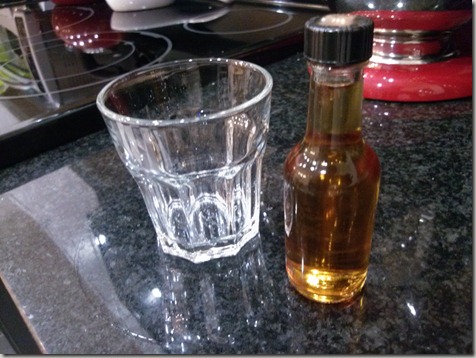 (I know what you’re thinking: Who buys glasses that are as big as a man’s head? I agree that it’s a ridiculous size of glass to have around the house, but hell, I was lucky I had it!)

My review will be flavoured (ha!) by the fact that I am Canadian, with ties to Montreal, and that Crown Royal has been a familiar brand to me since I was six years old. All Canadian kids are familiar with Crown Royal. It’s the the stuff in the bottle we have to remove from our marble bags before our marbles will fit.

And now, a play-by-play review of Crown Royal’s XR (Extra Rare) Cask Whiskey, the last batch produced by the LaSalle distillery in Montreal:

10:49 pm: It smells a little bit like a carne asada burrito. That’s a weird choice. Oh, I forgot to wash my hands after my 10pm burrito snack. Hang on.

10:51pm: A second sip, now that the first has been used to sterilize my wounds. Smooth. Oaky, with a hint of citrus. Is that a whiskey thing? I’m just repeating what a wine critic said once. Wine and whiskey are made the same way, right?

10:54pm: Had a little break to do some research. Apparently wine and whiskey are not made the same way. Wine is made from grapes, and whiskey is made from the tears of broken-down country singers.

10:57pm: A third sip. However you imagine Crown Royal XR (Extra Rare) Cask Whiskey to taste, you’re probably right. That’s what it tastes like. But smoother. And a little burny-er.

10:58pm: I keep looking at that word, “burny-er”. Shouldn’t there actually be a word that means what I mean by it, instead of me having to go and cobble sounds together to imply what I mean?

10:59pm: One thing this Crown Royal XR (Extra Rare) Cask Whiskey isn’t, is Scotch. If you like peat, this is not your drink.

11:00pm: Could I see myself buying a bottle of this and bringing it to a party when I was in college? Yes, but only if there were a girl there whom I was certain I could impress with the subtle differences between this whiskey and just a regular ol’ bottle o’ Crown. The investment would be substantial. She’d better know whiskey, that’s all I’m saying. Because I don’t, and someone would need to explain the distinctions to me. Did I say “smooth” already? That’s the only one I can come up with.

11:02pm: It took me two minutes to write that last paragraph.

11:03pm: A fourth sip. It’s a funny thing, sense memory. One of my happiest Crown Royal memories has to do with ordering a Crown n’ Coke at the Adventurers’ Club on Pleasure Island at Disneyworld. The Adventurers’ Club isn’t there any more. And there’s at least enough difference between this Crown Royal XR (Extra Rare) Cask Whiskey and regular ol’ Crown that sipping this is not bringing that sense memory back. I wonder what the difference is. A whiskey expert would know. Where’s that girl?

11:05pm: I’m sweating a little bit. I’m not sure if it was the late night carne asada burrito, the Crown Royal XR (Extra Rare) Cask Whiskey, or the combination of all of those things and trying to type really fast between sips in a stuffy room. I’m so out of shape.

11:07pm: A fifth sip. I’m going to try to taste something subtle this time. I think it might be fair to say the difference between Crown Royal XR (Extra Rare) Cask Whiskey and regular ol’ Crown Royal is the molasses flavour (and smoothness). I’m not sure it’s really there, but I definitely don’t remember it in regular ol’ Crown.

11:12pm I forgot what I was doing. A Big Bang Theory rerun is on. It’s the one where Sheldon takes acting lessons from Penny because he finds out his students think he’s a terrible lecturer. Now there’s an ad, aimed at teens, for some kind of anti-zit medication. It’s weird to be drinking Crown Royal XR (Extra Rare) Cask Whiskey while this commercial is on. It’s making me feel underaged. Ah, good, now it’s a shampoo commercial. We all need clean hair, no matter how old we are, right? Oh, sorry baldies.

11:14pm: A sixth, and final, sip. Smooth. Head’s a little…heavier…now. I think I can safely say that six sips of Crown Royal XR (Extra Rare) Cask Whiskey will get you a little buzzed. Fair warning, teens who are buying all of this anti-zit medication on a Saturday night. I mean don’t drink, kids.

11:18pm: I give Crown Royal XR (Extra Rare) Cask Whiskey two thumbs up. But I think my brain might be a little biased at the moment.